Wine Lister is a big fan of Bordeaux – the city, the people, the wines (of course), and we even have a soft spot for its idiosyncratic system for selling wines. This year has thrown us, as we learn about the 2019 vintage from our desks, confined to our homes, rather than out on the “Médoc highway” or between the walled roads of the right bank. 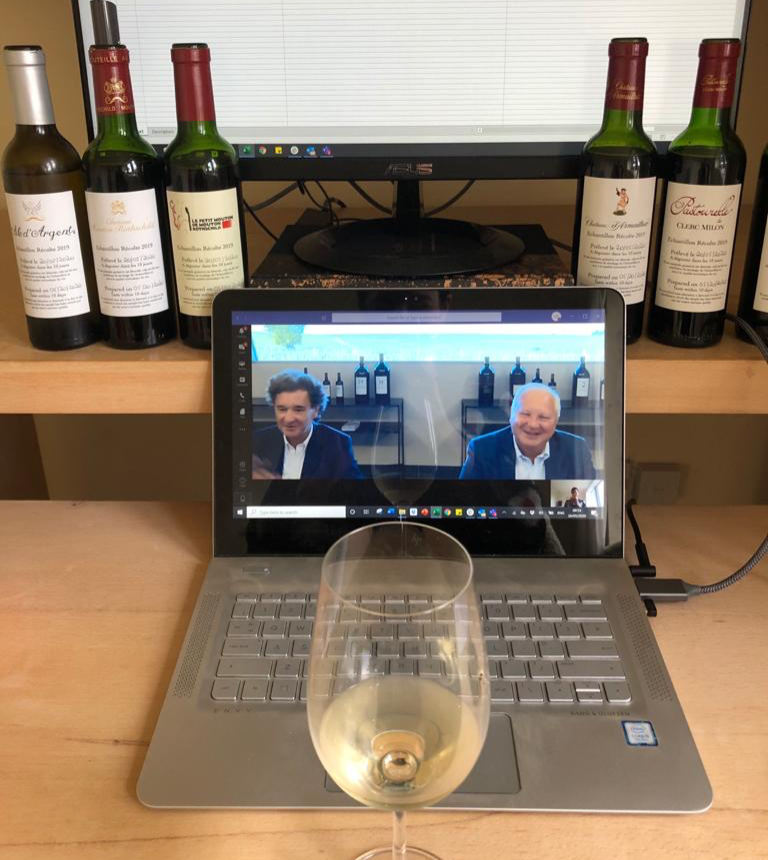 From what we have heard and read (and from the little we have tasted so far), the 2019 vintage in quality terms is in line with recent greats – 2018, 2015, 2010, and 2009. The current global pandemic makes for an unlucky welcome party for a wine that had luck on its side all through the growing season. Climatic events for the 2019 vintage were far less extreme than for 2018 or 2017. Frost threatened, and heat waves came, but each time the majority of vineyards escaped from disaster. “There was heat, but rain each time we needed it at the precise right moment”, explains Cos d’Estournel’s owner Michel Reybier. He names his Grand Vin in 2019 “miraculous”, and adds that Cos d’Estournel Blanc is the “best white they’ve ever made”. Miracles occurred further south in the Médoc, too – Technical Director Nicolas Glumineau believes that Pichon Comtesse 2019 has finally overtaken the heights of his heretofore “hero wine”, Montrose 2010.

Many producers we have spoken to echo this sentiment, underlining the high quality of the wines made in 2019, and notably, their impressive balance. The best examples in 2019 have reportedly achieved the vinous holy grail: equilibrium between the triumvirate of flavour concentration, structure (from tannin and alcohol), and acidity, thanks in part to the “balanced” weather conditions throughout the growing season.

The winter of 2018-2019 was unusually mild, causing budbreak to occur between five days and two weeks early. While such a phenomenon might normally cause the rest of the season to be premature, including harvest, the vinous clock soon righted itself thanks to a cool spring. Bordeaux spent several nights on frost-alert from late March to mid-May. Véronique Sanders, Director of Haut Bailly tells us they lit fires in the vineyards to protect from frost on at least five occasions during the spring of 2019 – on 27th and 28th March, 13th April, and 5th and 6th May. With no frost damage, and flowering back to “normal” timing, the next challenge facing the 2019 vintage was heat. France’s south-west experienced another hot summer in 2019, but rain arrived just in time on three occasions: one in July, once in August, and then some light showers in early-mid September, bringing freshness and energy to the grapes before harvesting.

Hot and dry spells through the summer have made 2019 a Cabernet Sauvignon vintage; the grape takes up a slightly higher proportion than normal of the blend of many Grands Vins. By the same token, the cooler spells have resulted in good freshness for Merlot. Philippe Dhalluin, Managing Director at Baron Philippe de Rothschild, says that Merlot across the group’s châteaux is the best since 2010, but that the Cabernet Sauvignon is so good, that the high quality of the former will be of benefit largely to the second wines. Mouton Rothschild is made up of 90% Cabernet Sauvignon in 2019, a higher proportion than average.

2019 was lucky in volume, as well as in quality. Dhalluin tells us production volumes of the Baron Philippe stable are normal-to-generous, and he is not alone. On the right bank, Director of La Gaffelière, Thomas Soubes, says “we are lucky to have quality and quantity this year”. Where in 2018 properties across both banks were forced to triage vigorously because of mildew, and started with lower yields due to severe heat stress on the vines, 2019 evaded both of these afflictions. Also contributing to good volumes at many properties were exceedingly healthy grapes at the time of harvest. Director of Talbot, Jean-Michel Laporte explains, “thanks to the impressive health of the grapes, sorting in 2019 was purely about choosing the very best quality”. The first Merlot grapes harvested at Pichon Baron certainly seemed a hopeful sign for the liquid to come. 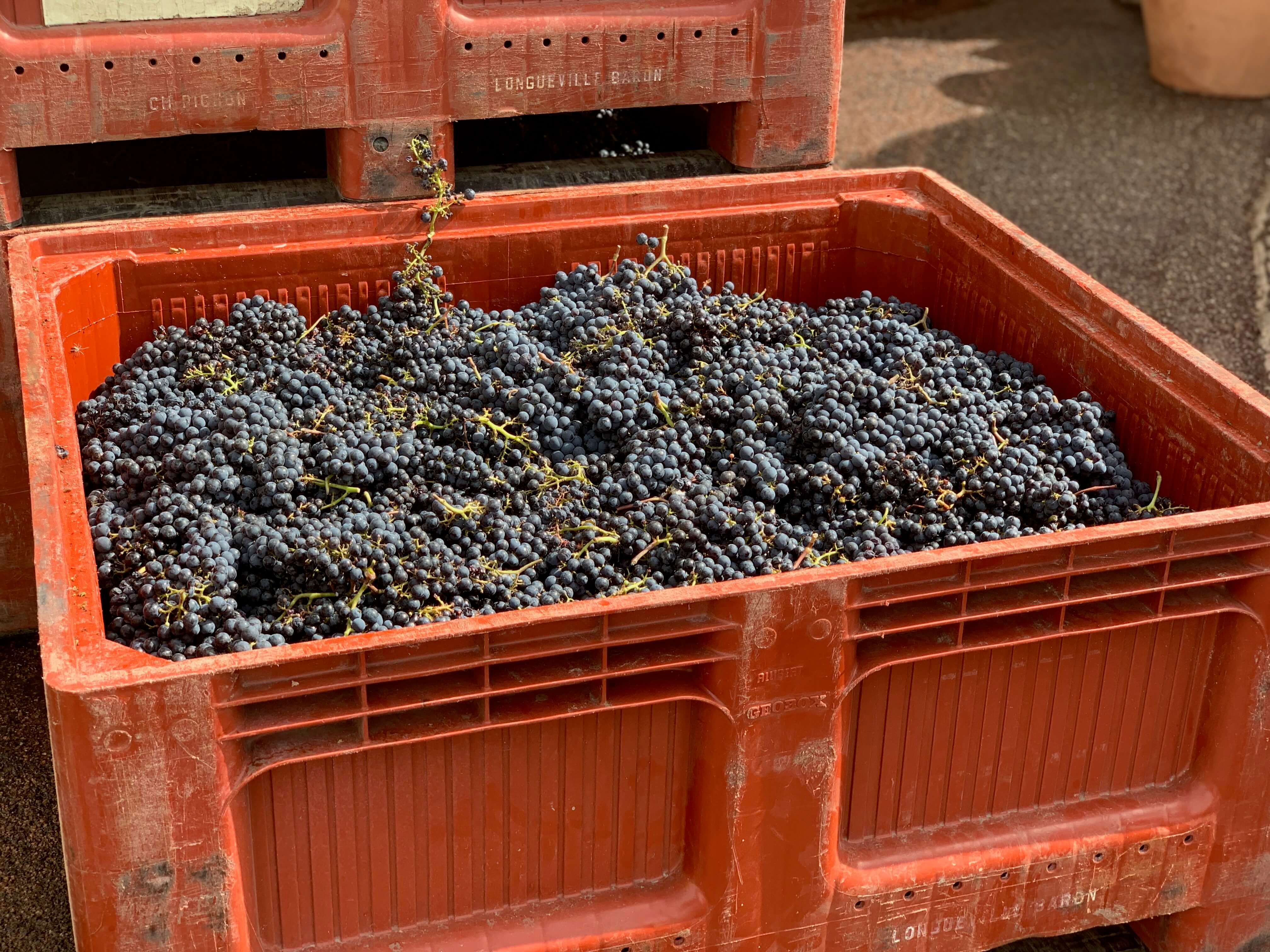 23rd September 2019 – some of the first Merlot grapes to be harvested at Pichon Baron.

Though the Wine Lister team is yet to taste the majority of Bordeaux 2019s, their quality appears to be a good news story for a world on lockdown. While the current market could be considered a rather ill-fitting stage for a vintage with such qualitative promise, the releases have just begun (with Pontet-Canet the first major release). Early signs are that the Bordelais are listening, and might just reduce prices in line with the global crisis. For anyone with the headspace for en primeur in the current context, this is a campaign not to be missed.

Wine Lister looks forward to tasting more of the wines as soon as it becomes possible. In the meantime, we will be providing the usual campaign coverage, in the form of real-time release emails for Wine Lister Pro Subscribers, and Twitter alerts for all our followers, as well as live updates on our dedicated en primeur page.

A second post on Bordeaux 2019 will focus on the campaign, and discuss pricing within the unprecedented context of this year’s releases. Watch this space.

Riesling MUST BUYs that are worth the rave
Bordeaux en primeur part II : the campaign