The majority of Antonio Galloni’s Bordeaux 2017 scores have been added to Wine Lister. The release of his Saint-Emilion satellites will complete Vinous’ coverage of Bordeaux en primeur 2017. Below is an overview of his top-scoring wines so far for this vintage: 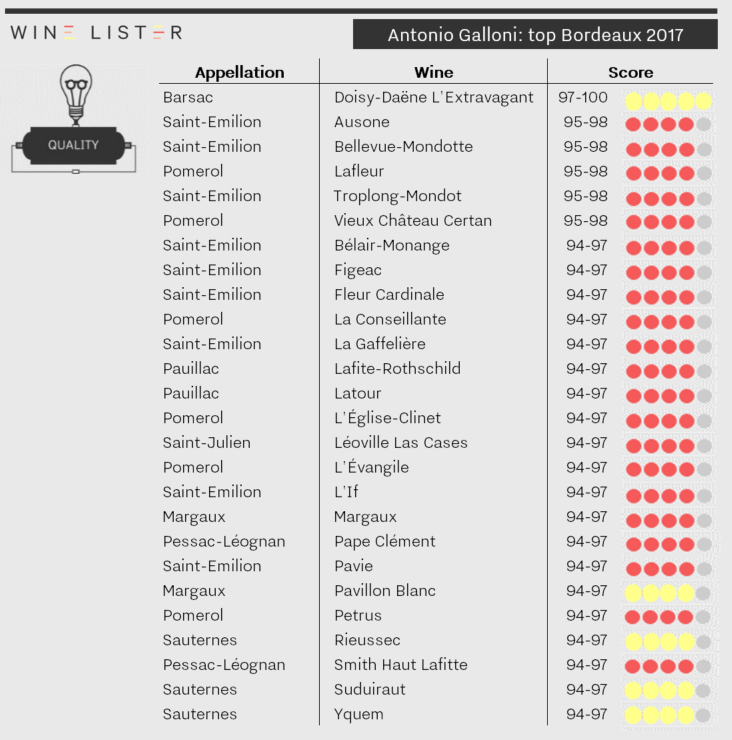 The only potential perfect scorer is Doisy-Daëne L’Extravagant (97-100). This strengthens the case for the Sauternes & Barsac appellations as the biggest successes of the 2017 vintage (see top scores from Bettane+Desseauve, Jancis Robinson and Neal Martin for comparison).

Five wines scored 95-98 points, and they are all from the right bank, which Galloni explicitly declares to be superior to the left bank in 2017. Lafleur, released today exclusively by Justerini & Brooks, achieves the top score bracket for a red wine from all four of Wine Lister’s partner critics, making it the red wine of the vintage.

It is joined at the top of Galloni’s picks by Ausone, Bellevue-Mondotte, Troplong-Mondot, and Vieux Château Certan.

The next score category, 94-97, is also dominated by the right bank, featuring 10 wines from Saint-Emilion or Pomerol and just six red wines from across the whole of the Médoc and Graves. The surprise entry is L’If, from the Thienpont family, which outscores its venerable older sibling, Le Pin (93-96).

All these scores are now live on the wine pages of our website for subscribers to view (alongside those of Bettane+Desseauve, Julia Harding MW and Neal Martin), with links through to Antonio Galloni’s tasting notes on Vinous.com. Have a look at Antonio Galloni’s coverage of Bordeaux 2017 here. NB. As Jeannie Cho-Lee did not taste the 2017 Bordeaux, Antonio Galloni’s scores complete Wine Lister’s Quality scores for the vintage.