Taittinger Comtes de Champagne 2008 was released yesterday (1st October) at c.£89 (per bottle in-bond), marking one of the last 2008s from the “Grandes Maisons” to enter the market. The release has reignited discussion on the success of the vintage in Champagne, which has been declared one of the best of the decade along with 2002. Below we investigate top 2008s, and where the latest addition from Taittinger fits within them.

Characterised by a consistent, dry, and cool growing season, climatic conditions in 2008 encouraged slow veraison across Champagne, which enabled grapes to achieve their full phenolic maturity while retaining acidity. The combination of both gives the vintage considerable ageing potential, and unyielding structural integrity. 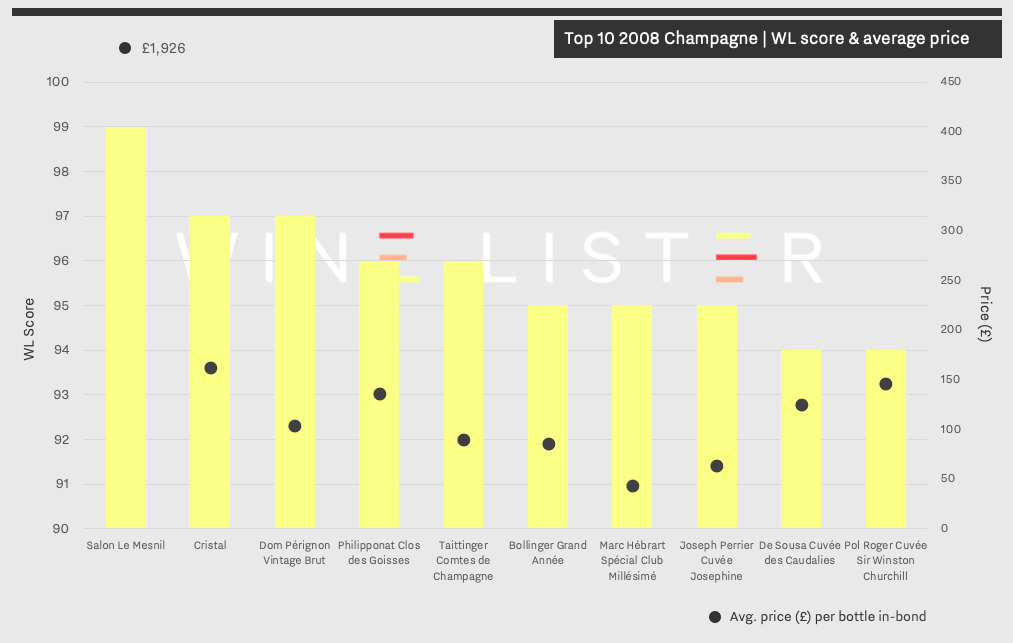 The newest addition to the top 10 haul, Taittinger Comtes 2008 shows good value within the wider context of the vintage, despite entering the market at a 26% premium on the current market price of its 2007 vintage. While achieving the same WL score as MUST BUY Philipponat Clos des Goisses 2008 (96), Taittinger’s latest release is available for 34% less, (£89 vs. £135 per bottle in-bond). Similarly, it achieves one more WL point than Bollinger Grand Année 2008 (available for £85 per bottle in-bond), for a very slight premium.

Wine Lister partner critic, Antonio Galloni awards Taittinger Comtes de Champagne 2008 98+ points, stating it “is simply breathtaking” and “represents the purest essence of the Côtes des Blancs in a great, historic vintage”. He concludes, “readers who can find the 2008 should not hesitate”.

Taittinger Comtes de Champagne is historically one of the top 10 most liquid champagne brands, giving it further investment appeal. Additionally, Taittinger announced that it has not produced any 2009, 2010, or 2011 Comtes de Champagne, due to poor weather conditions during these years – a fact that may well increase interest in this latest release.