The last two days of Place de Bordeaux releases have included vintages from three powerhouse producers of different regions, whose commonality lies in their use of Bordeaux varietals. Below we examine these key releases.

The second week of September Place de Bordeaux releases began with the latest offerings from cult Californian producer, Opus One. Described by Wine Lister partner critic, Antonio Galloni, as “one of the most complete wines of the vintage”, 2017 Opus One was released onto the UK market at £228 per bottle – the same price as the 2016. Awarding it 95+ points, he states that the 2017 is “a dense, full-throttle beauty”, with “a distinctly red-toned fruit profile that distinguishes it from the surrounding vintages”. Although receiving one point less than the 2016 (which has a score of 96+ from Galloni), the latest vintage holds particular significance. 91% of fruit had been picked just before the devastating Californian wildfires commenced, eradicating two lots of Opus One vines. Awarding 17.5 points to the 2017, Wine Lister partner critic, Jancis Robinson, notes that there is “not a trace of smoke taint”, and describes “a combination of savoury and something as sweet and chalky as Edinburgh rock”.

Both the historic nature of the vintage, and the reduction in volume released this year are facts sure to encourage high levels of interest. Opus One is, perhaps unsurprisingly, the number one US wine (and joint-fifth overall) voted by the trade to have seen the sharpest rise in demand, as shown below: 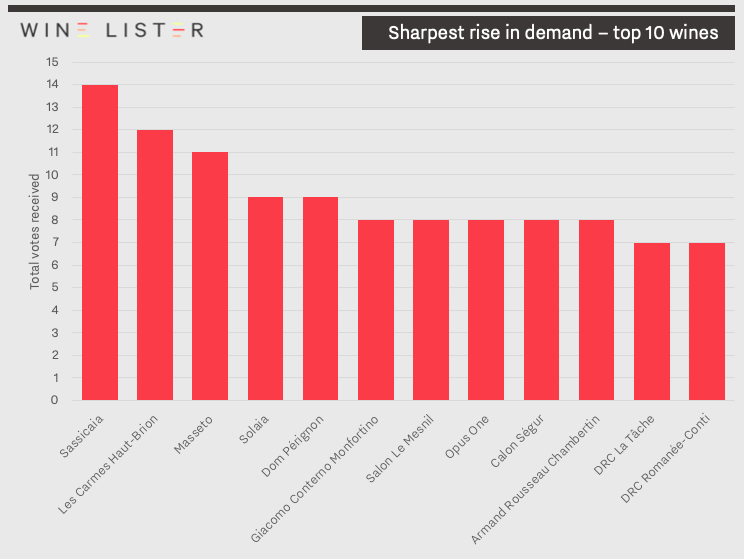 Results from Wine Lister’s 2019 Founding Members survey, showing the consensus on the top 10 wines that have seen the sharpest rise in demand

Kicking off yesterday’s releases, Masseto 2017 was released, and merchants were offering at around £480 per bottle. Though slightly higher than last year’s first tranche release price (readers should note that this year, there is only one single tranche), the 2017 enters the market 11% below the current price of the 2016. Antonio Galloni gives the 2017 96-99 points (up from 94-97 for the 2016), calling it a “spectacular wine in the making”, with notes of “red cherry jam, mocha, leather, licorice and a dash of new oak”. While 2017 will be remembered as one of the hottest and driest growing seasons in recent history, Winemaker, Axel Heinz, states that the vintage “managed to encapsulate all the ripeness and concentration” of the climatic conditions. Indeed, Galloni notes that the latest release is “quite simply a remarkable wine for such a challenging year”. Masseto already earns strong acclaim as the wine to have seen the third-sharpest rise in demand according to the trade (see above) – the 15% reduction in volume released onto the market from last year will no doubt only encourage requests for the 2017 further.

The second wine from the cult producer, Massetino 2018 was also released yesterday, at a likely UK market price of c.£205 per bottle. Although its second vintage, this is the first international release of Massetino, as last year’s distribution was limited to the Italian and the US markets only. We sampled the latest release at CVBG’s Beyond Bordeaux tasting, and found it to have expressive, concentrated fruit on the nose, and more refined notes of Marcello cherry and minerality on the palette.

Yesterday’s releases ended with a bang, as Latour released its 2009 vintage. Merchants offering at c.£860 per bottle place the 2009 just under the current market price of the iconic 2010. This is the first ex-château stock to be released since its original en primeur release, and is available at a c.10% premium to existing stock on the market. Wine Lister partner critic, Neal Martin, awards the latest release 99 points, stating that it “is endowed with a simply magnificent nose with intense blackberry and cassis fruit laced with minerals and graphite, extremely focused to the point of overwhelming the sense”. “Wow”, he concludes.

The start of September releases: contributions from all continents
Rounding up the second week of Place de Bordeaux releases