‘Tis the season of dark evenings, woolly jumpers, and open fires. To round out the perfect winter evening, Wine Lister has many a drinking suggestion up our collective cashmere sleeves, but let us start with these top five 20-year-old Châteauneuf-du-Papes by Quality score. 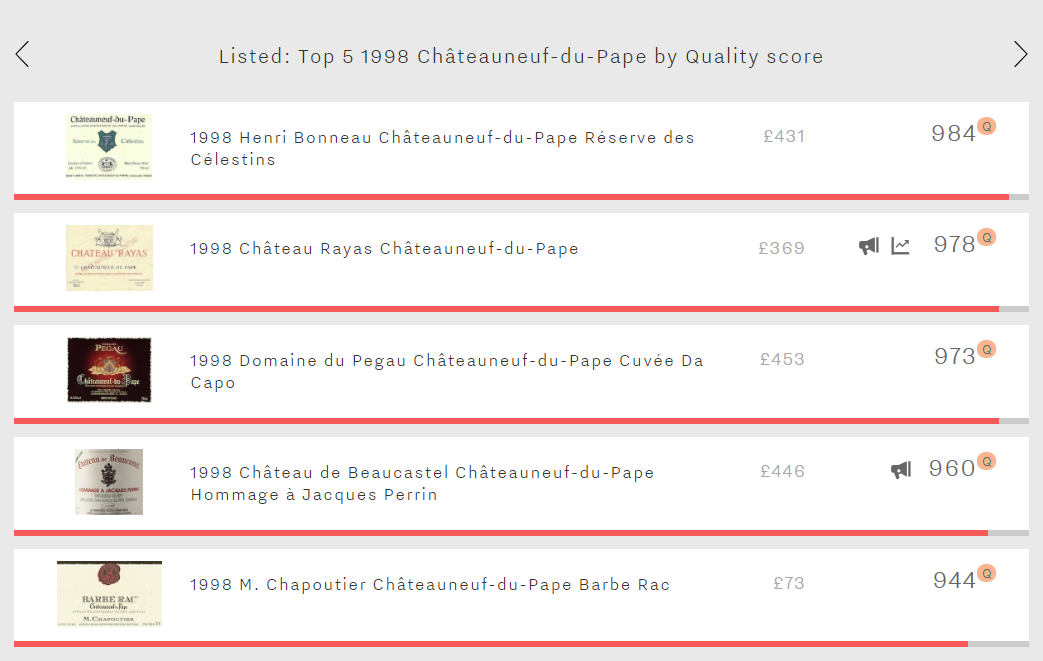 In first place of this week’s top five is Henri Bonneau’s Châteauneuf-du-Pape Réserve des Célestins. Its Quality score of 984 for the 1998 vintage is not only the best of this week’s top five, it is also Bonneau’s highest of the last 20 years, for £431 per bottle in-bond. This price tag is thanks to solid short- and long-term price performance, with six-month price growth of 16.9% and a three-year compound annual growth rate (CAGR) of 16.2%.

Next for 1998 Châteauneuf-du-Papes by Quality score comes this week’s best brand, Château Rayas. Its Brand score of 982 is thanks to presence in 33% of the world’s best restaurants, and an impressive search ranking as the 53rd most-searched-for wine on Wine Lister. Wine Lister partner critic Jancis Robinson awards it full marks, describing it as “not dissimilar” to Rousseau. Its impressive quality and popularity are complimented by the highest Economics score of this week’s top five (988) thanks to the top six-month price performance of 21.7% and a three-year CAGR of 25%.

In third place is Domaine du Pegau’s Cuvée Da Capo 1998 with a Quality score of 973. It is the most expensive of this week’s top five, at £453 in-bond per bottle, perhaps due to its cult-style following. The Cuvée Da Capo achieves the highest average trading volumes at auction of the group (408 bottles per year), according to The Wine Market Journal.

The fourth wine of this week’s top five may also be said to have somewhat of a cult following. Beaucastel’s Hommage à Jacques Perrin 1998 is priced at £446 per bottle in-bond for a Quality score of 960. Despite this excellent score, eight of its last 15 vintages have managed even better Quality scores than the 1998 – indeed Hommage à Jacques Perrin is on average the highest-scoring Châteauneuf-du-Pape on Wine Lister (with an average Quality score of 965).

Finally, M. Chapoutier’s Châteauneuf-du-Pape Barbe Rac 1998 rounds out the group, with a Quality score of 944 and a price of £73 per bottle in-bond (or a mere 17% of the average price of the other four wines combined).

Other than the Rayas, any lucky owners of these bottles should consider cracking them open this Christmas, lest he or she risk missing their respective quality peaks.