With England progressing serenely (ahem) through their round of 16 match against Columbia, much Champagne (and probably much more beer) will have been drunk on Tuesday evening. With somewhat tortuous logic therefore, this week’s Listed section focuses on the best Champagnes from the 2000 vintage by Economics score. 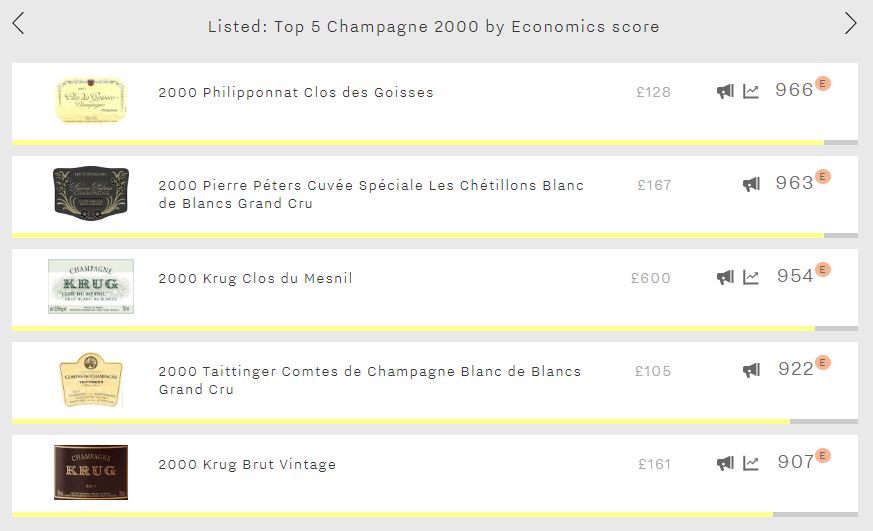 Separated by just three points at the top of the table are Philipponnat Clos des Goisses (966) and Pierre Péters Cuvée Spéciale Les Chétillons Blanc de Blancs Grand Cru (963). Despite experiencing the lowest Quality score of the five – a nonetheless hugely respectable 944 – the Philipponnat gets its nose ahead thanks to excellent growth rates over both the long and short-term, with a three-year compound annual growth rate (CAGR) of 20% and having added 33% to its price over the past six months alone. No wonder it is one of the group’s three Investment Staples.

It is interesting that Pierre Péters Cuvée Spéciale Les Chétillons Blanc de Blancs Grand Cru comes in second place in terms of Economic performance, despite it experiencing the group’s lowest overall Wine Lister score for the vintage (910). Its lower Wine Lister score is the result of its Brand score (822) being the weakest of the group by nearly 90 points, confirming the phenomenal head start that the globally renowned houses have over grower Champagnes in terms of brand recognition. It manages second place in terms of economic performance thanks to formidable short-term growth rates, its price having risen 42% since January.

The remaining spot is filled by Taittinger Comtes de Champagne Blanc de Blancs Grand Cru (922). It is the second-most liquid of the group, its top five vintages having traded 720 bottles at auction over the past year.

Incidentally, 2000 was a European Championships year, not a World Cup year. Fittingly, given the focus of this blog, France won. England failed to make it past the group stages.

An answer to post-primeurs blues?
The secret to value in Burgundy