With the latest online search frequency data in from Wine-Searcher we can now see which wines caught the public’s attention in May. Results demonstrate the effect of the 2016 en primeur campaign – now coming to a close – with Bordeaux brands taking four of the five top spots.

Cos d’Estournel saw online searches rise the most last month: the brand was one of the first out of the blocks with its 2016 release, which came in late April, maintaining the same price as its 2015. Exactly one month later, Lynch-Bages released its 2016 for €96 ex-négociant. Despite a 14% increase on 2015, the release went down well on the Place de Bordeaux, perhaps due to the wine achieving the highest Quality score of the century. 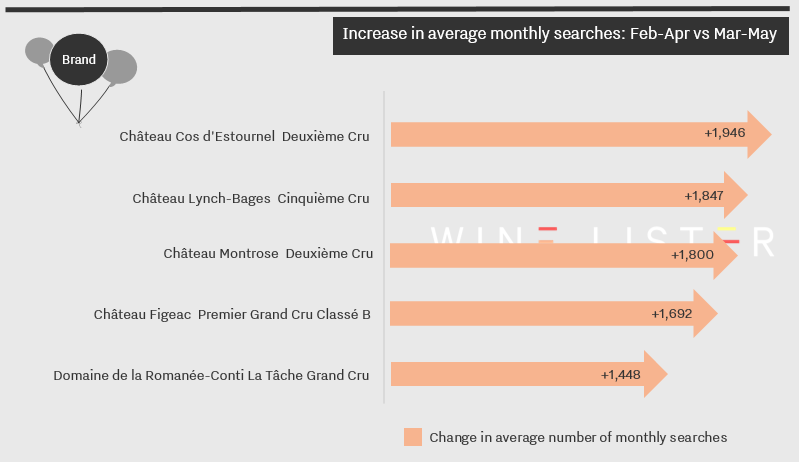 Montrose, which saw the third largest increase in searches in May, released its 2016 mid-month. With its Quality score up on 2009, 2010 and 2015, but, like neighbour Cos, releasing at the same price as 2015, Montrose 2016 looked like one of the vintage’s better buys. Figeac also saw searches soar in May but is something of an anomaly in this table – it only released its 2016 on Tuesday 13th June, too late to influence May’s search statistics. Nonetheless, the brand may well be garnering interest due to its exceptional Quality score, as rated by our three partner critics (Jancis Robinson in the UK, Bettane + Desseauve in France and Antonio Galloni in the US).

The final wine of the table, providing some respite from Bordeaux, is a heavyweight from Burgundy: DRC La Tâche. Two auctions in May – one from Sotheby’s and one from iDealwine – saw a number of bottles of La Tâche for sale, which may explain the boost in searches.