Now that all our partner critics’ scores have been published, we have been able to feed them into Wine Lister’s bespoke algorithm to arrive at Quality scores for the Bordeaux 2016 vintage. The top 15 wines are shown below.

Wine Lister’s Quality score combines the ratings from our partner critics, three of the most respected critics in the world – Jancis Robinson, Antonio Galloni, and Bettane+Desseauve. A small weighting is also added for a wine’s ageing potential. 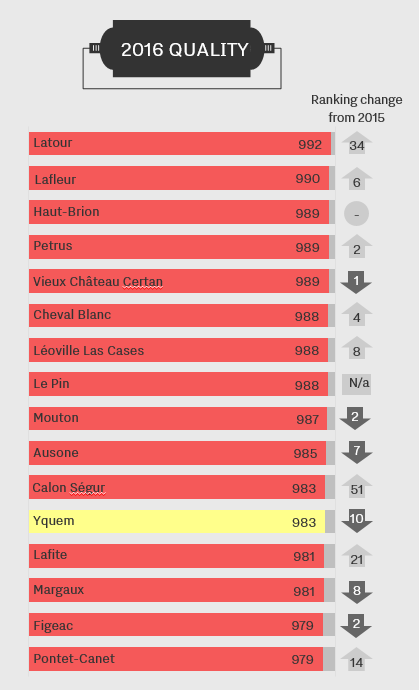 Ironically, the top wine of the vintage is Latour, not available to buy en primeur since the château withdrew from the system in 2012. The Pauillac first growth surged 34 positions up the table from last year, to 992 points for its 2016 Quality score.

Lafleur is just behind on 990, closely followed by Haut-Brion, Petrus and Vieux Château Certan. In fact, all the usual contenders make an appearance in the top 15, including the five first growths, their right bank equivalents such as Le Pin, Cheval Blanc, and Ausone, and Sauternes’ own first growth, Château d’Yquem.

Less obvious showings that are likely to represent better value include Calon Ségur, which improved a mammoth 51 places on last year, as well as Figeac and Pontet-Canet, in joint 15th position.

The top 40 2016 Quality scores will be listed in our upcoming Bordeaux market study, due for release later this week, and available to subscribers here. Alternatively, see the full ranking on the website.