Listed: The best of Chapoutier

This week’s “top five” blog is a first for Wine Lister, as we analyse the highest-Quality wines of a single producer, Michel Chapoutier. Readers should note that this is simply an analysis exercise, and not a paid advertisement (albeit a shining review of Chapoutier, given how high the Quality scores are).

In first place of this week’s top five, perhaps surprisingly, is a white wine – Chapoutier’s Ermitage Blanc L’Ermite, with a Quality score of 966. Not only does this make it the highest-quality white Rhône on Wine Lister, but also the second highest-quality wine from the Northern Rhône overall, beaten only by Jean-Louis Chave’s Hermitage Cuvée Cathelin. The 2015 earns 94-96 points from Wine Lister partner critic, Vinous, with Josh Raynolds commenting on its “outstanding focus and persistence”. While outperforming its siblings for Quality, it also earns the highest average price of the group, at over £300 per bottle in-bond. 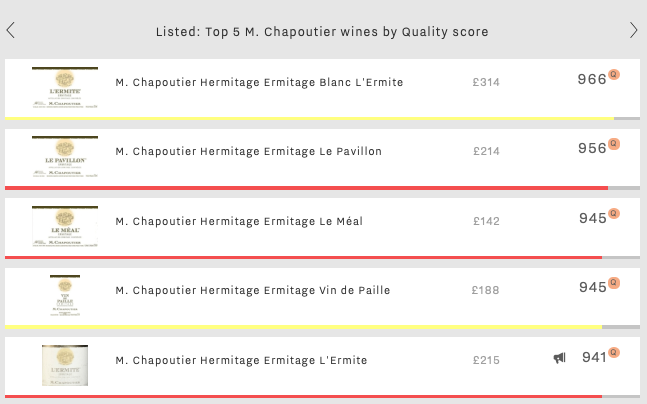 Next up is the first red of the group, Ermitage Le Pavillon, with a Quality score of 956. Wine Lister partner critic, Jancis Robinson, awards the 2016 vintage an impressive 19 points, naming it a “polished and pure Hermitage”. It also earns the group’s best Brand score of 897, appearing in 15% of the world’s best restaurants and ranking in 266th place for Wine-Searcher searches among the c.4,000+ wines on Wine Lister.

In joint-third place comes the second red of the group, Ermitage Le Méal, and Chapoutier’s sweet white, Ermitage Vin de Paille. Both achieve a Quality score of 945, however they are distinctive not just in their respective styles, but also in their Brand scores. Le Méal is clearly the better-known, with a Brand score of 724 and a search rank of 710, compared with the Vin de Paille’s Brand score of 593 (the lowest of this week’s top five), and a search rank of 2088. Interestingly however, the Vin de Paille’s presence in the world’s top restaurants is the better, if only by 1% (6% vs. 5% for Ermitage Le Méal).

Rounding out Chapoutier’s top five for Quality is the Ermitage L’Ermite, with a Quality score of 941. Despite its position at the bottom of the group, it achieves the highest Quality score at vintage level for the 2010 (992). The Ermitage L’Ermite 2010 achieves 95+ points from Wine Lister partner critic, Vinous, and though Josh Raynolds calls it “remarkably long, chewy, smoke- and spice-accented…”, he also warns it “should be stashed away and forgotten for a good long while”. 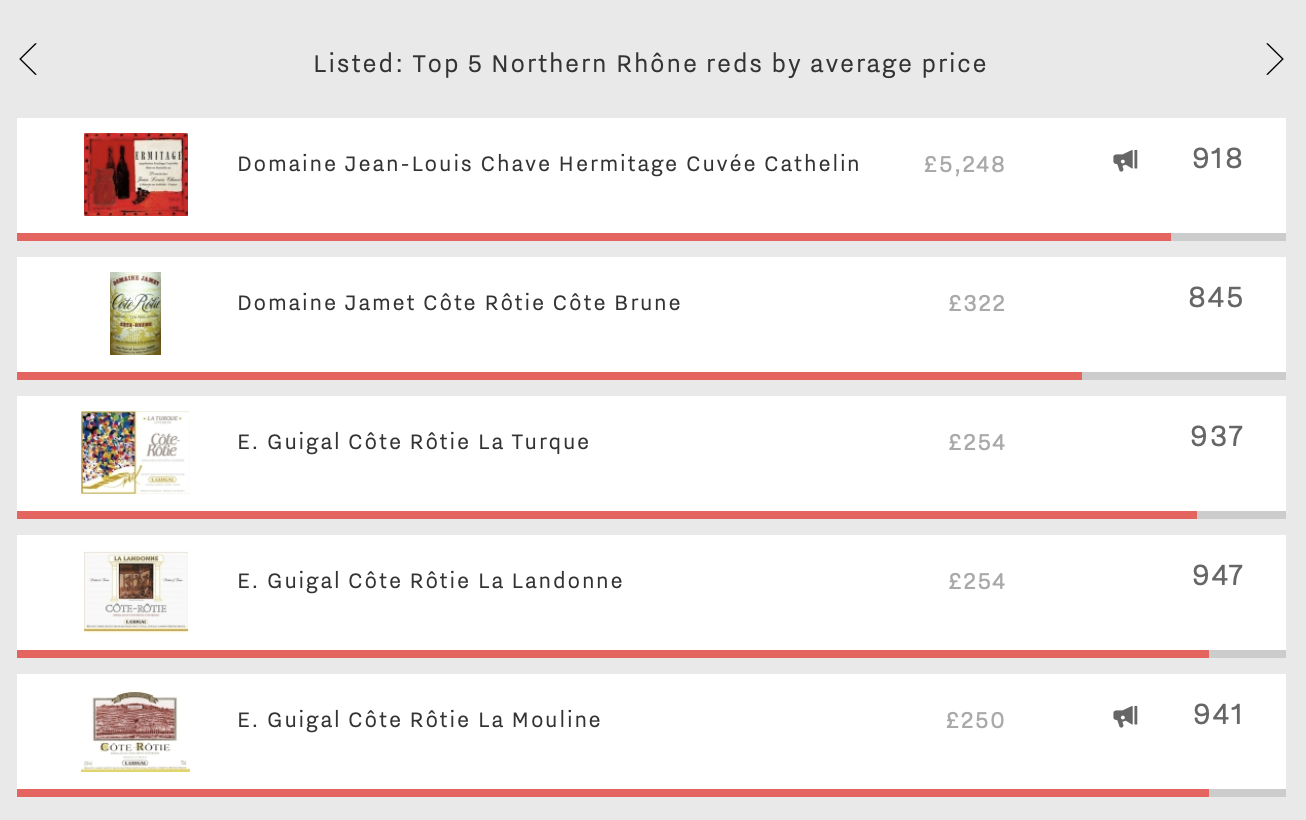 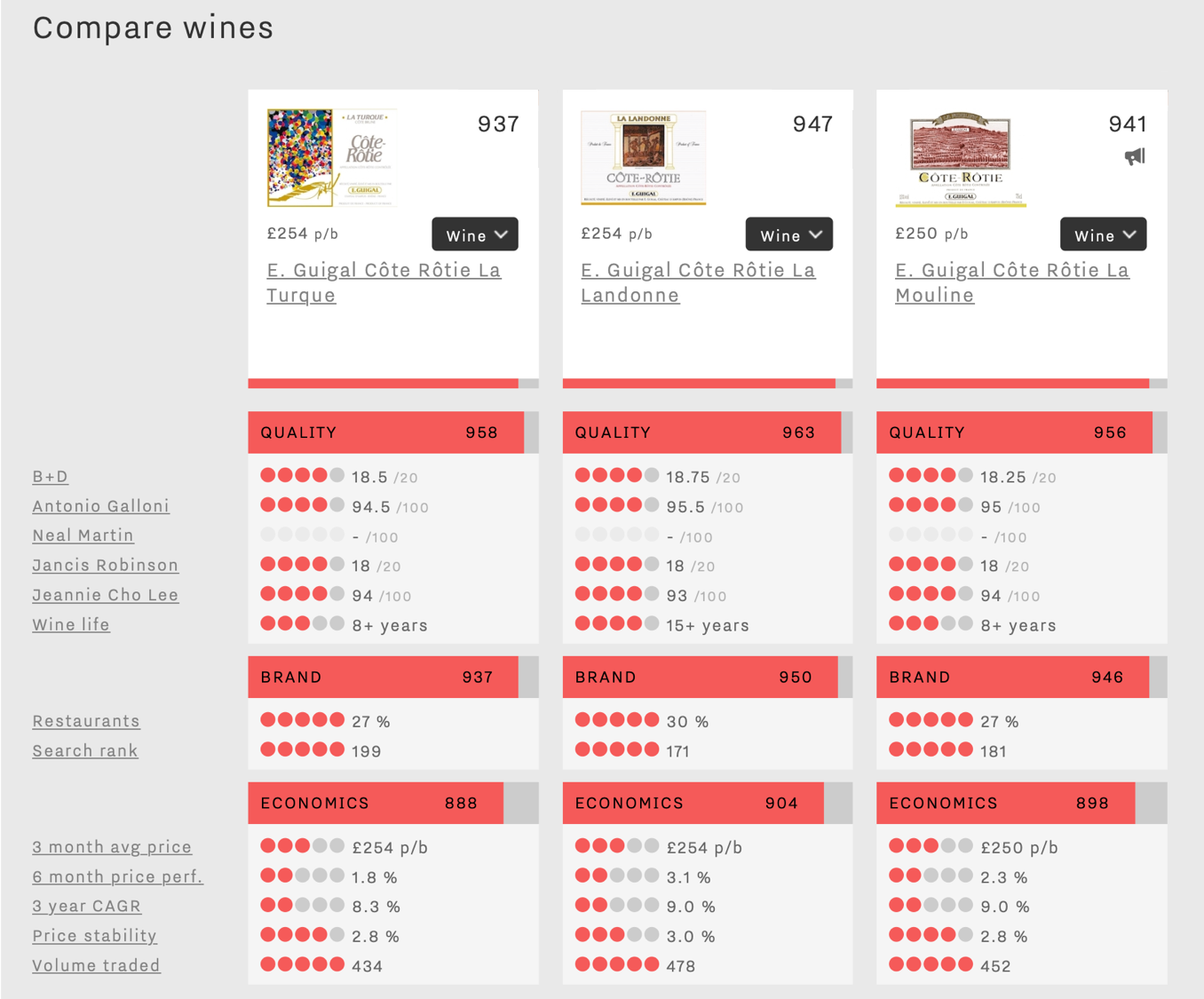