Riesling MUST BUYs that are worth the rave

Throughout the late 20th century, Riesling gained a somewhat tarnished reputation, particularly within the UK, as a consequence of the abundance of overly sweet, low-quality Rieslings being released onto the market. Over the past two decades, however, it has made a comeback – especially the dry styles of top-quality wines with ageing potential and great value. The high acidity and complexity of tertiary flavours in Riesling have led to it being a favourite among wine industry professionals, including Jancis Robinson, who hails it “the greatest white wine grape”.

To help you uncover Germany’s noble grape, this week we examine some iconic dry and off-dry Riesling MUST BUYs with WL scores above 95. 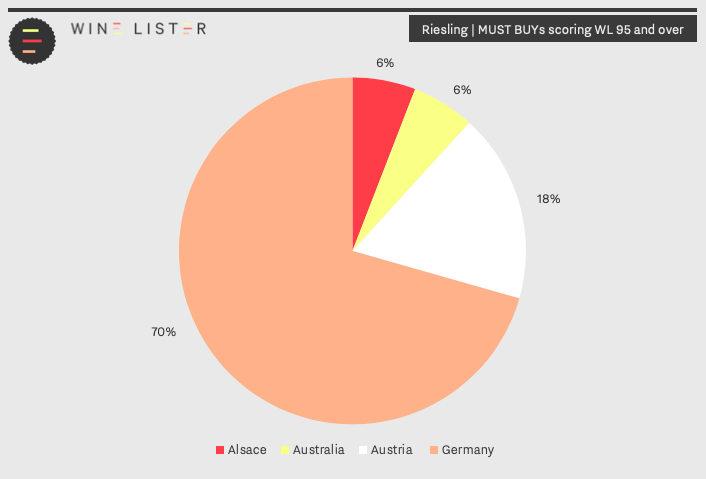 Top quality Riesling is now produced around the world, from the traditional regions of the Mosel and Alsace, through to Australia and South America. 70% of dry Riesling MUST BUYs scoring above WL 95 hail from Germany (25 wines), of which just over half (19 wines) are produced in the Mosel. The other German regions in the list comprise two entries from the Rheinhessen, and one each from the Rheingau, Nahe, and Pfalz respectively.

Austria achieves six entries on the list of Riesling MUST BUYs scoring WL 95 and over (18%), which all hail from Niederösterreich, while the Alsace and Australia’s Clare Valley both earn two entries respectively.

With a WL Score of 97 at just £59 (per bottle in-bond), the 2010 Wehlener Sonnenuhr Auslese Goldkapsel exemplifies the excellent quality-to-price ratio of JJ Prüm’s wines. Long considered one of the Mosel’s, if not the whole of Germany’s most revered estates, its Wehlener Sonnenuhr vineyard is situated on steep south-facing, blue slate slopes, resulting in its complex minerality. Scoring it 19/20 points, Wine Lister partner critic, Jancis Robinson recounts that the 2010 vintage of this off-dry Riesling “Dances out of the glass on the nose. Such delicacy and life! Racy”. This vintage is available to purchase from Lay & Wheeler, where a case of six starts at £330 (in bond).

Dating back to 1626, 13 generations of the Trimbach family have contributed to the estate’s winemaking, now considered one of Alsace’s top properties. Cuvée Frédéric Emile is a blend of two Grand Cru vineyards, Geisberg and Osterberg, that share complex soils of alkaline clay and limestone, producing a wine of intense minerality. Both sites benefit from evening winds (the Tahlwendala), which allow extended ripening periods. The 2008 Trimbach Riesling Frédéric Emile achieves a WL Score of 95, and is available to purchase by the case from Cru World Wines for £390 (in bond).

Described by Jancis Robinson as “Big and opulent with some lychee flavours”, the 2013 was a notably good vintage for F.X. Pichler’s Kellerberg Smaragd. Achieving the best WL Score since 1995 (96), it showcases Pichler’s attempt to refine his style and prioritise purity of fruit and balance over power. Although the narrow stone terraces of the Kellerberg vineyard necessitate farming and harvesting by hand, this wine has an impressive quality-to-price ratio. At £34 (per bottle in bond), the 2013 vintage is also a Wine Lister Value pick, and is available to purchase from BI Wines & Spirits (by the case of 12).

Often coined one of Australia’s most renowned Riesling winemakers, Jeffrey Grosset’s Polish Hill plot was planted in 1996, following years of research into the effect of soil, rock, and altitude on Riesling. This eight-hectare plot is thus at 460 metres altitude, ensuring cool nights and longer ripening of its Riesling grapes. Planted in an area termed “hard rock”, the Polish Hill vineyard is situated on a crust of clay over slate, which, alongside the cool growing season, causes stress on the vines, resulting in smaller but more complex-flavoured grapes. The 2013 vintage achieves a WL score of 95, and is available to purchase from Lay & Wheeler for £50 (per bottle in bond).

See the full list of Riesling MUST BUYs here.

To many a wine expert, Riesling is amongst the world’s finest white wine grape varieties, perhaps thanks to its versatile nature. The aromatic grape does well as both a sweet and dry wine, to drink straight away or suitable for long-term ageing. This week Wine Lister looks at the top five Rieslings under £100 by Quality score, which all hail from Alsace or the Mosel. 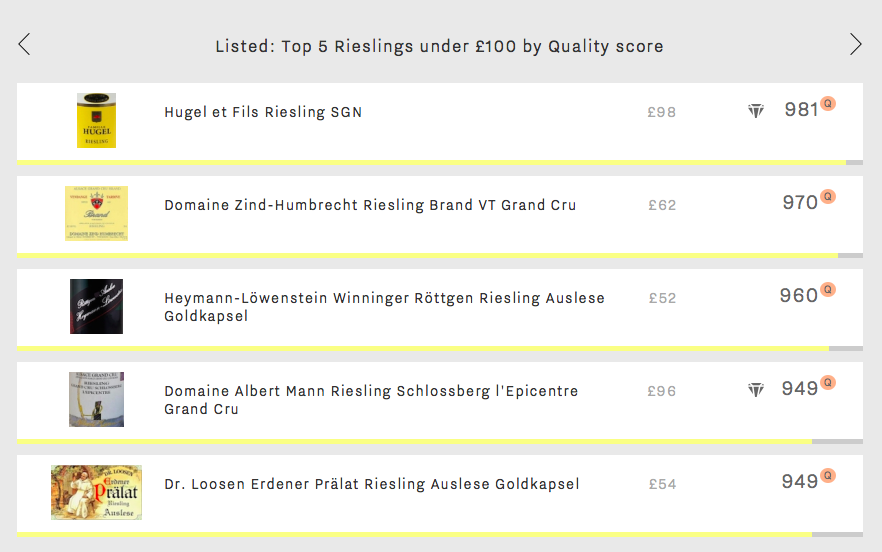 Hugel et Fils’ Riesling SGN takes the top spot this week with a Quality score of 981. This phenomenal Quality score is in part the result of an average wine life of 24 years (compared to 13 years for the rest of this week’s top five). The Riesling SGN from Hugel is therefore perhaps justifiably this week’s most expensive choice, at an average price of £98 per bottle in-bond. Sadly, it might take a Christmas miracle to source this in time for next week’s festivities. An average of just 600 bottles are produced of this Wine Lister Hidden Gem each year.

Next is Domaine Zind-Humbrecht’s Riesling Brand VT with a Quality score of 970. Though in second place for Quality, it achieves this week’s best Economics score of 633 (and also this week’s best overall Wine Lister score) – despite only 18 bottles of it having been traded at auction in the last year. It is the short-term price performance that really boosts the Economics score – the price having increased by 17% in the last six months.

In third place is this week’s first German wine – Heymann-Löwenstein’s Winninger Röttgen Riesling Auslese Goldkapsel. It achieves a Quality score of 960, and at only £52 per bottle in-bond it is this week’s most affordable option.

The two remaining spots of this week’s top five share the same Quality score (949). Domaine Albert Mann Schlossberg l’Epicentre Grand Cru is this week’s second Hidden Gem. Its Hidden Gem status is confirmed by a modest Brand score of 255 – the lowest of the group, due to presence in just 1% of the world’s top restaurants, and being only the 3,797 most-searched-for of Wine Lister’s wines on Wine-Searcher.

Rounding off the group is the second Riesling from Germany, Dr. Loosen Erdener Prälat Auslese Goldkapsel. If you are looking for Quality look no further than its 2006 vintage, which achieves a Quality score of 975 at an average price of £44 per bottle in-bond (compared to the wine’s overall average price of £54 in-bond). Its excellent quality-to-price ratio earns it a spot as one of Wine Lister’s Value Picks – indeed, it is given high praise from Wine Lister partner critic, Antonio Galloni, claiming it to be a “…massive and yet somehow delicate auslese of stunning quality”.

Riesling is amongst the greatest grapes at communicating time and place. Top Riesling is not only one of the most ageworthy of all wines, it is also one of the most versatile grapes, delivering crisp lime-scented examples in South Australia, and heady, honied, petrol aromas in the Mosel. The top five Riesling brands are a good example of this. Despite all hailing from Alsace and the Mosel, they showcase at least some of the variety that can, at times, cause confusion (but don’t extend to the tonguetwisting trockenbeerenauslese or flummoxing fuder numbers). 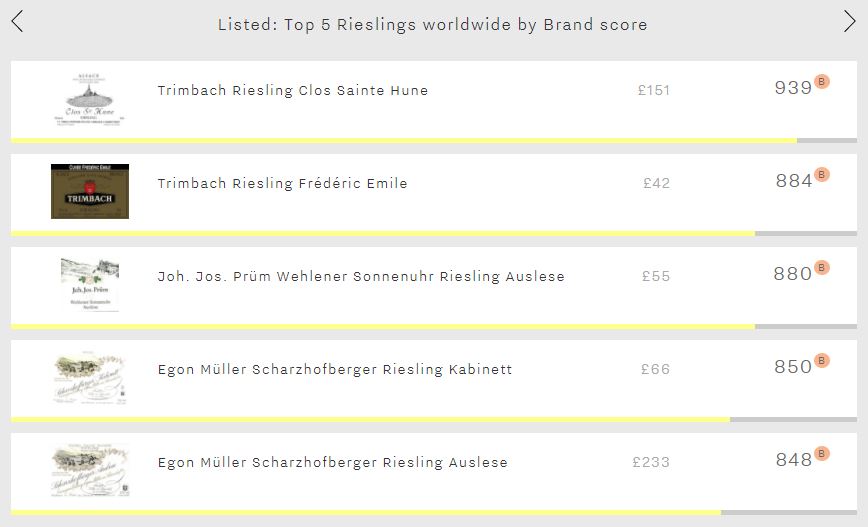 Alsatian heavyweight Trimbach fills the top two spots with its flagship Clos Sainte Hune (939) and Frédéric Emile (884). Clos Sainte Hune is the only Riesling to crack the 900-point mark in the Brand category, thus ranking amongst the most elite Brands on Wine Lister’s database. Its lead is thanks to its popularity – it is searched for twice as frequently as the group’s second-most popular wine (Prüm’s Wehlener Sonnenuhr Auslese). It is in fact Trimbach’s Frédéric Emile that achieves the greatest level of restaurant presence of the group, appearing in 37% of the world’s top establishments, it just pips Clos Sainte Hune to the post (34%). Confirming Trimbach as darling of the trade, the next best wine in the criterion (Prüm’s Wehlener Sonnenuhr Auslese) appears in 22% of top restaurants.

Egon Müller fills the last two spots with wines from the famous Scharzhofberger vineyard – its Kabinett (850) and Auslese (848). It is interesting that it is the Kabinett that comes out on top in the Brand category, despite trailing its sweeter sibling by significant margins in the Quality category (820 vs 974) and Economics category (523 vs 806). It manages to do so thanks to a greater breadth of restaurant presence (21% vs 16%), despite the Auslese achieving greater depth with 3.6 vintages / formats offered on average (the best of the group).

It is worth comparing the performance of Riesling’s top brands to the grape’s top Quality scores. Whilst these five brands achieve an average of 880 in the Brand category, the top five Rieslings by Quality score manage a remarkable average of 990 in the qualitative category. It seems that it is in terms of consumer popularity that Riesling struggles. Trimbach’s Clos Sainte Hune – the most popular Riesling in the world – is only the 241st most popular wine on Wine Lister’s database.

Riesling seems doomed to be perennially underappreciated, perhaps due to its range of sugar levels, or maybe the complexity of the German classification system. Certainly its remarkable quality does not command the brand recognition it deserves. If we compare the average of the top five Brand and Quality scores of 100% Riesling, Chardonnay, and Sauvignon Blanc wines, it is clear to see that Riesling’s outstanding quality does not currently result in a corresponding level of brand strength.