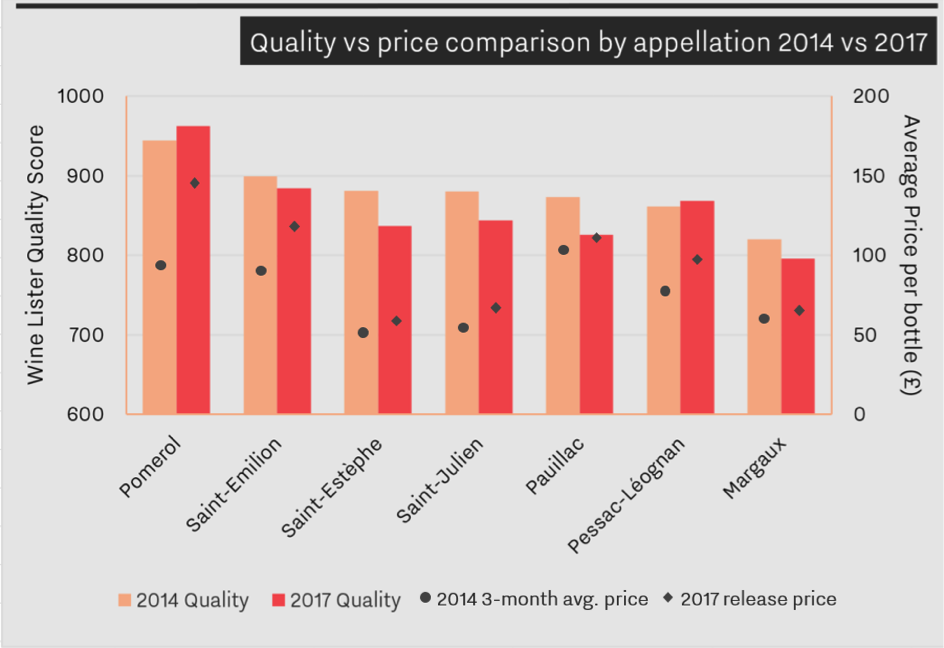 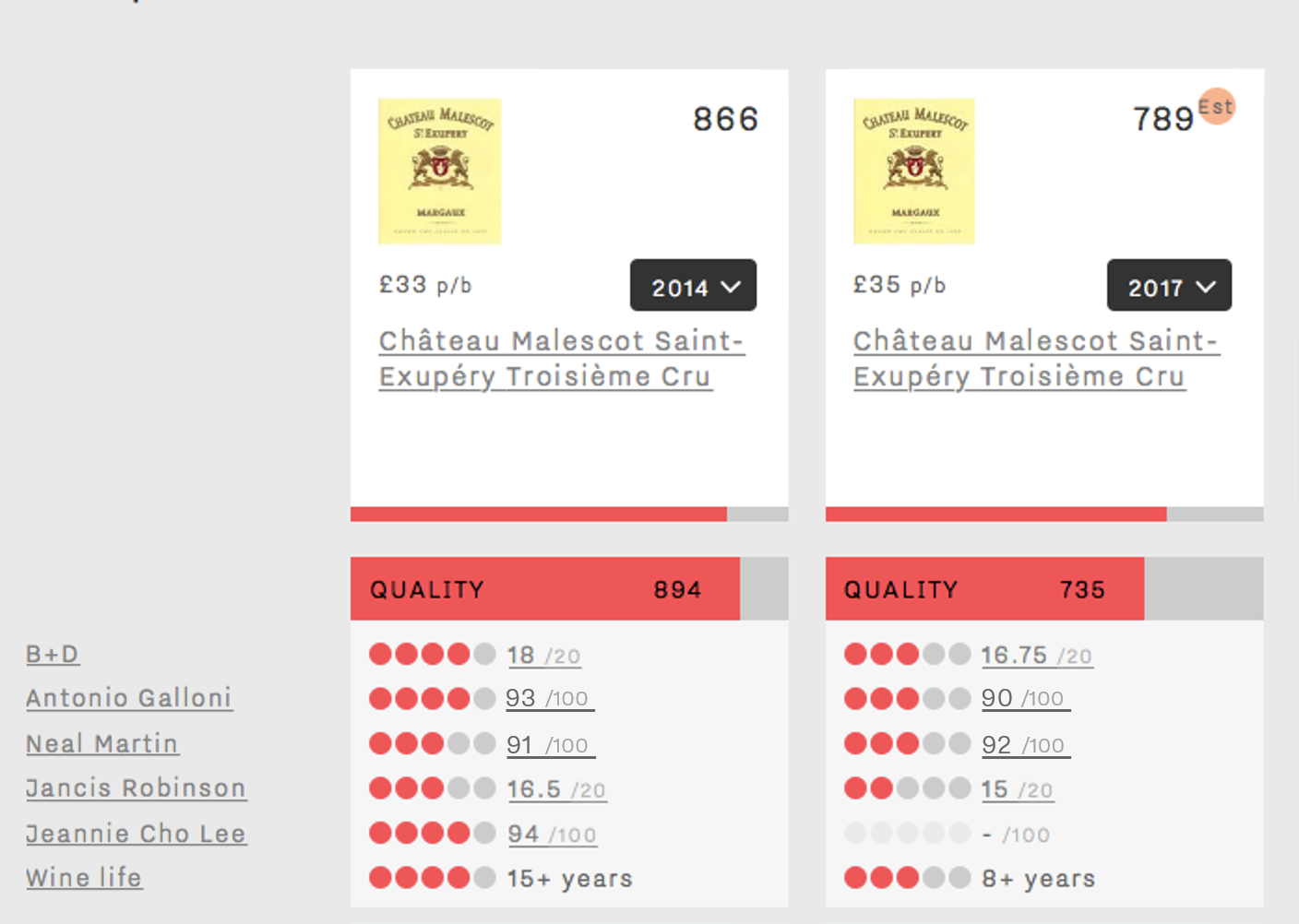 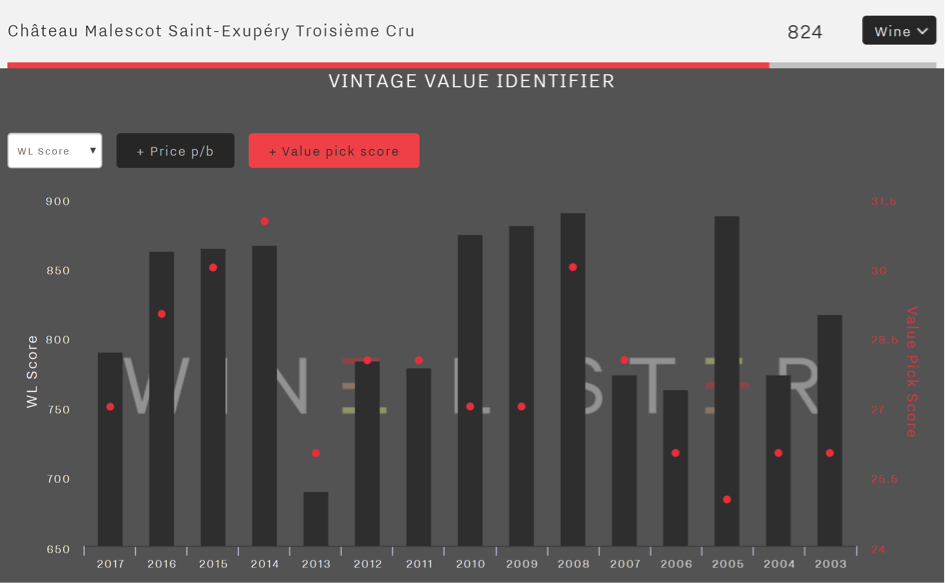 As a sort of postscript to the difficult 2017 en primeur campaign (read our CEO Ella’s thoughts here), over the past week or so Pomerol powerhouses Petrus and Le Pin were released at £1,480 and £1,750 per bottle respectively. With Pomerol wines achieving the top three Quality scores of all reds for 2017 – and five of the top 10 – it was the top-performing red appellation of the vintage. 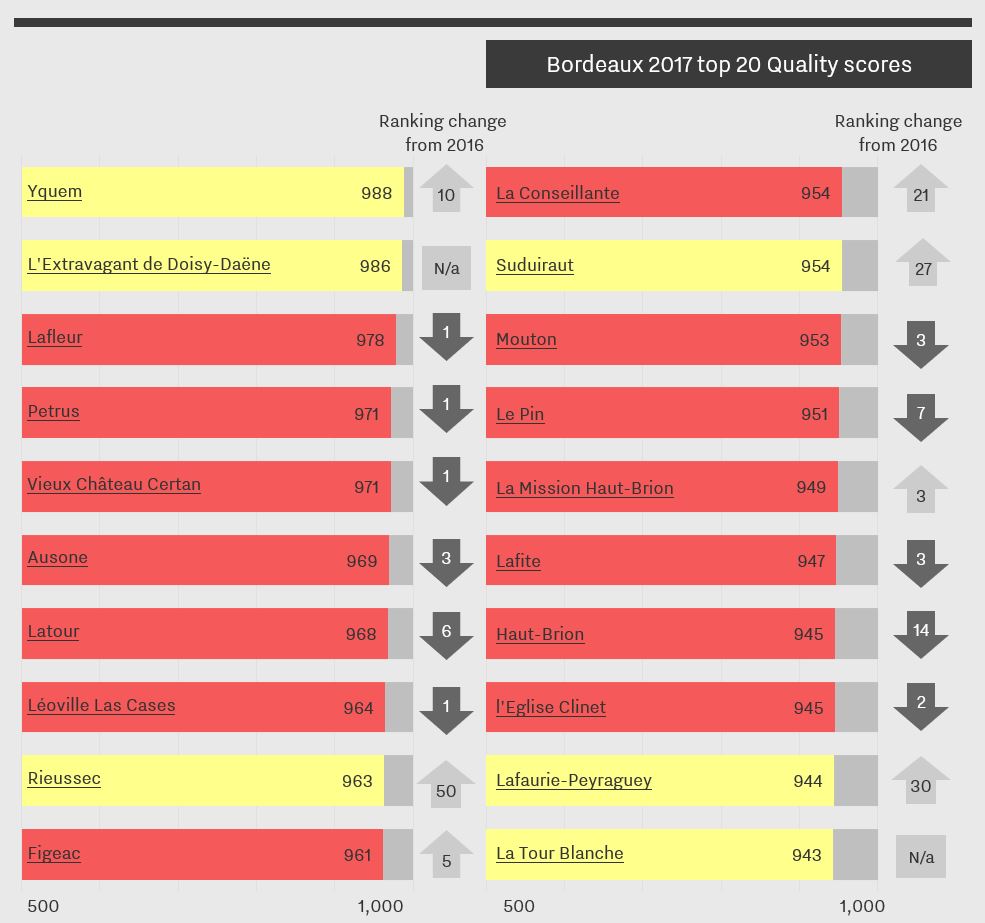 Now that we have release prices for all of Pomerol’s top wines, we can see which came out on top in terms of overall Wine Lister score*. 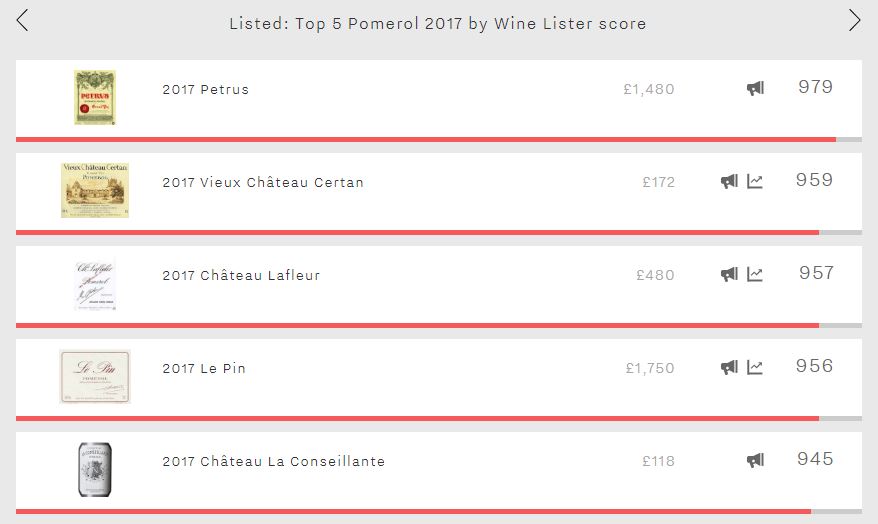 With a score of 979, Petrus was not just Pomerol’s leading wine of 2017, but the number one wine in Bordeaux. This is perhaps unsurprising given that it received the joint-second best Quality score of the vintage of all reds (971) – alongside Vieux Château Certan – and also has a Brand score of 998 (beaten only by Lafite, Latour, Mouton, Yquem, and Dom Pérignon Vintage Brut) along with a wine-level Economics score of 978 (third-best in Bordeaux). With Wine Lister’s Founding Members voting it the second-most prestigious wine in the world in a recent survey, behind DRC La Romanée-Conti, Petrus is currently unbeatable in Bordeaux.

Number two on the 2017 Pomerol leaderboard is Vieux Château Certan (959). While the confidence rating attributed by Wine Lister’s Founding Members slipped a point over the past year from 9/10 to 8/10, it nevertheless achieves Pomerol’s second-best Brand score (972). Thus, despite its relatively modest Economics score (909) – still putting it amongst the very best on Wine Lister’s 1,000 point scale – the 2017, thanks to its excellent Quality score, manages to edge just ahead of Lafleur in terms of overall Wine Lister score (957).

Lafleur 2017, the best red wine of the vintage for Quality (978), was released in early May at £430 per bottle, a 7% decrease on the 2016 release price. This was Neal Martin’s favourite of the five, Wine Lister’s newest partner critic awarding it a score of 95-97 /100 and commenting: “This is an awesome 2017 from Baptiste Guinaudeau, one of the few that will oblige several years in the cellar”.

Le Pin 2017 was released in the UK at £1,750 per bottle, its 25% decrease on the 2016 release price the largest year-on-year reduction of the five. It experiences the lowest Quality score of the five for the vintage (951), and also has the group’s lowest Brand score (944). The fact that the 2017 betters Lafleur and La Conseillante in terms of overall Wine Lister score is thus the result of its formidable Economics score (980), which it achieves not just because of its high average price but also strong growth rates, which are the best of the group over both the long and short-term.

Rounding out the group is La Conseillante (945). Whilst it is by far the most affordable of the group, it is the only one of the five whose 2017 climbed the Bordeaux Quality score table compared to 2016, surging 21 spots to be the eighth best red and 11th best overall.

Remember that you can catch up on all of the campaign’s releases on our dedicated en primeur page.

* Please note that overall Wine Lister scores for en primeur wines use estimated Economics scores based on the performance of back vintages. 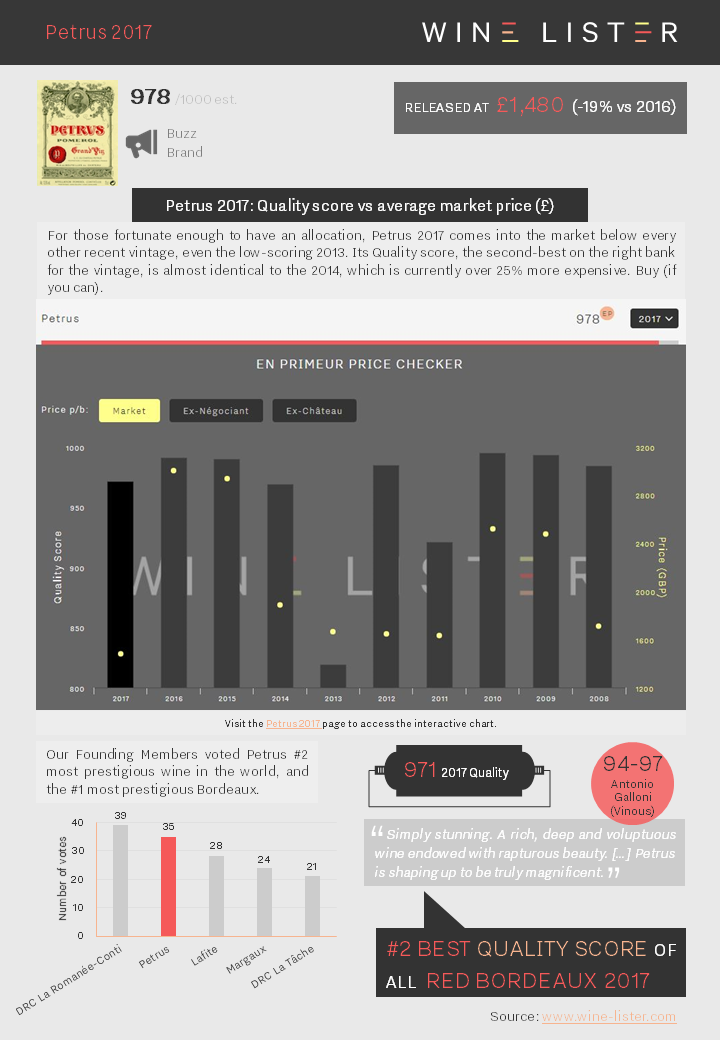 You can download the slide here: Wine Lister Factsheet Petrus 2017 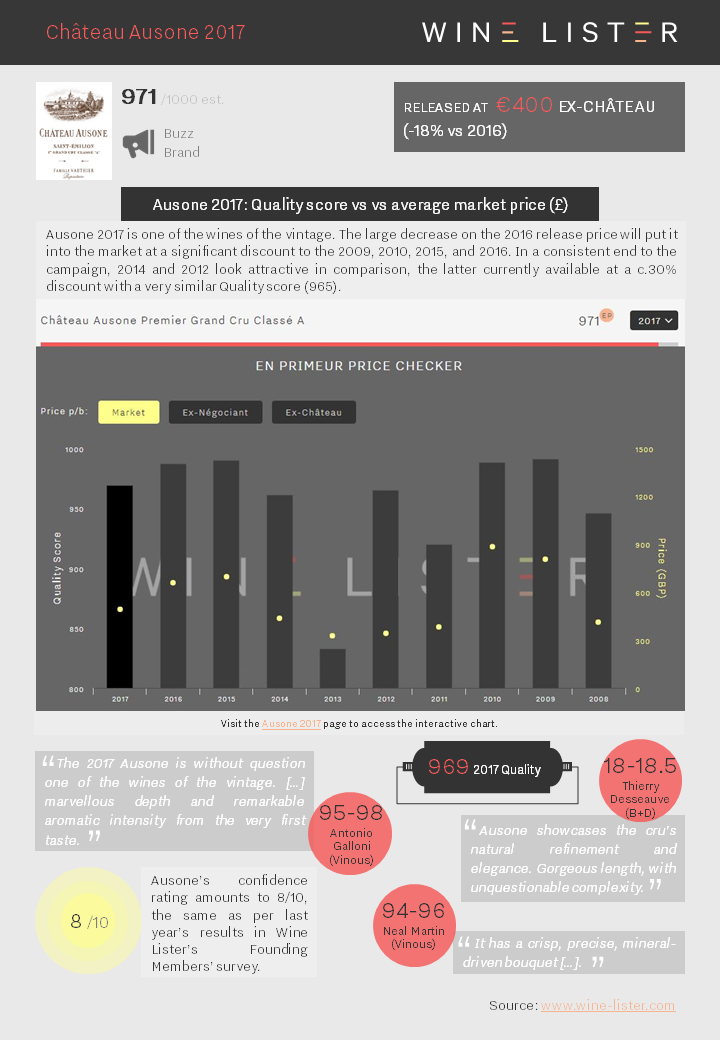 You can download the slide here: Wine Lister Factsheet Ausone 2017 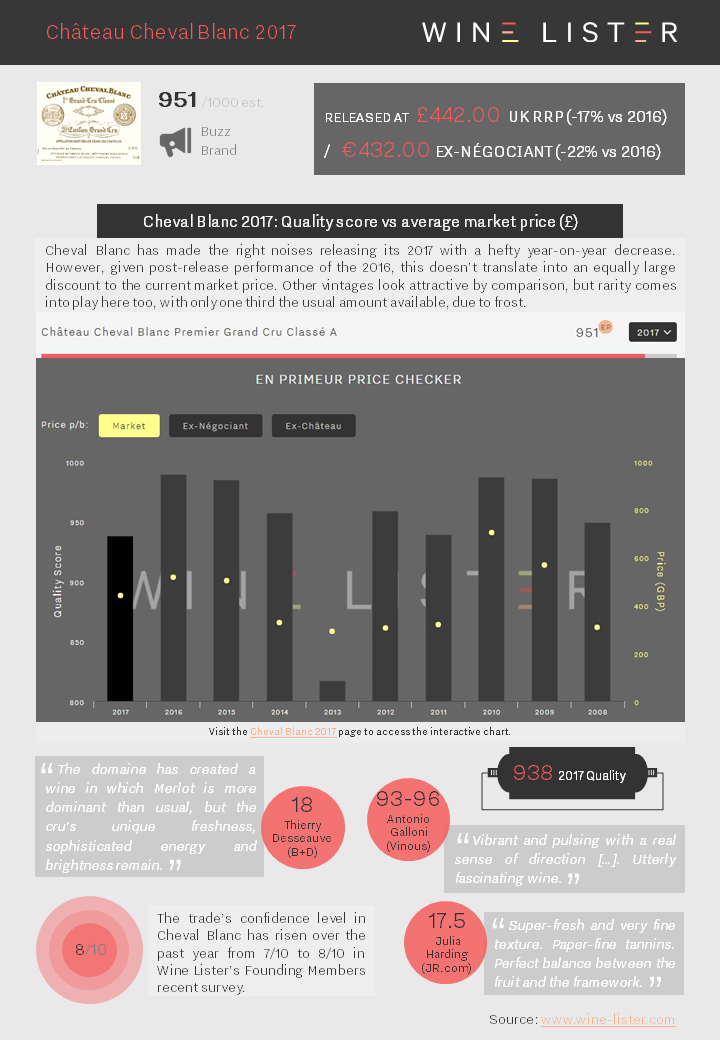 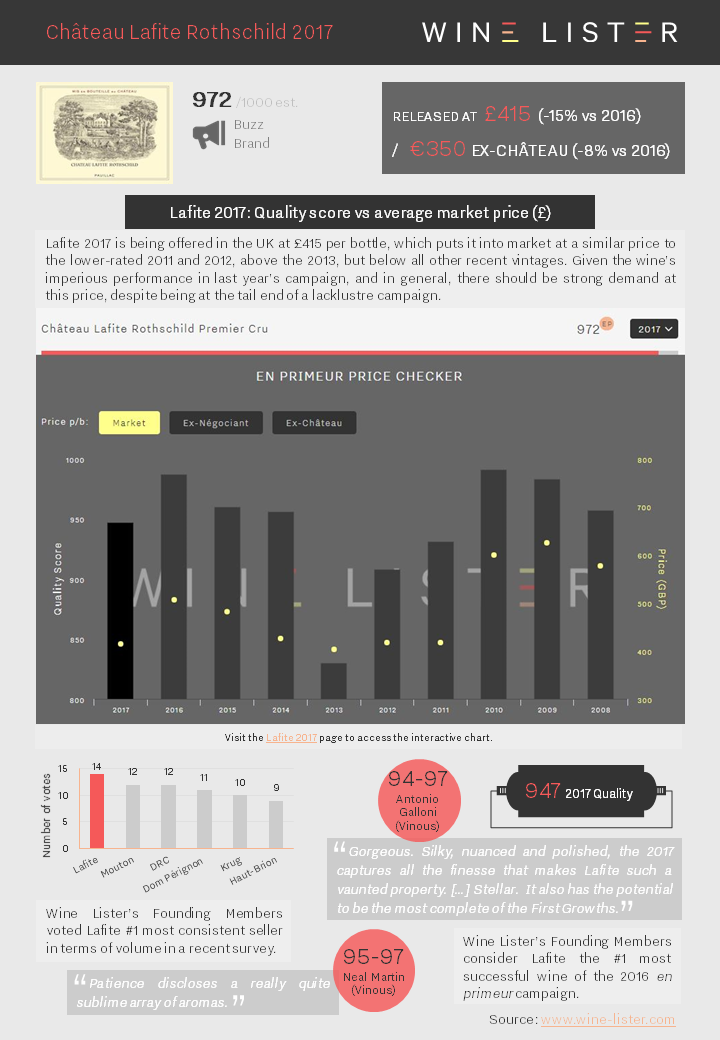 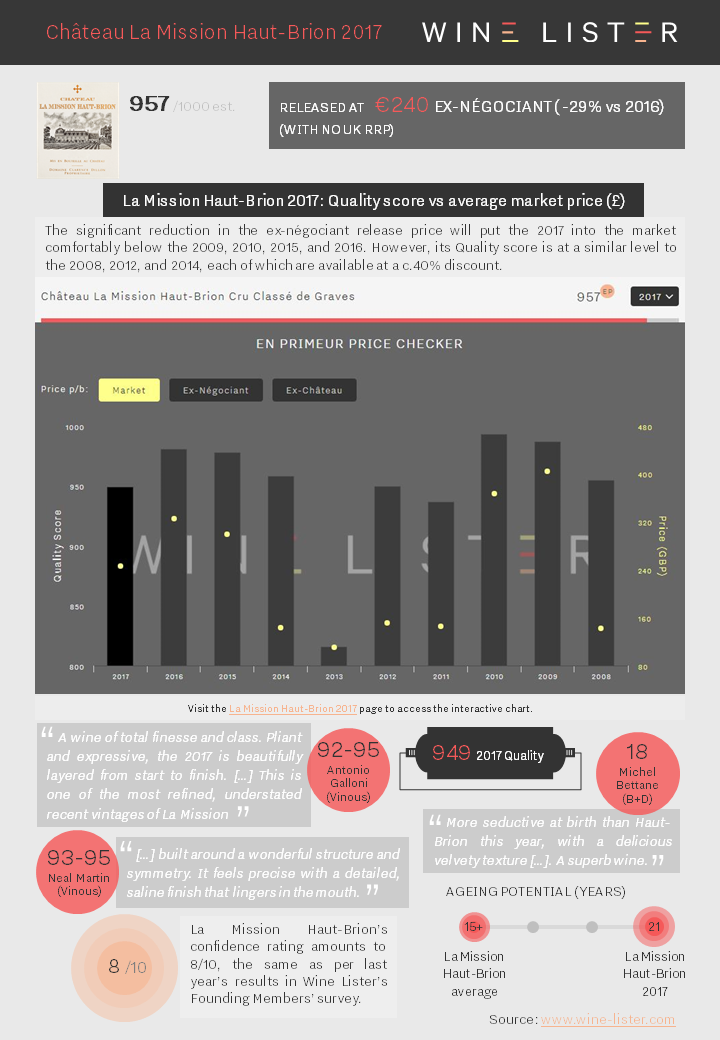 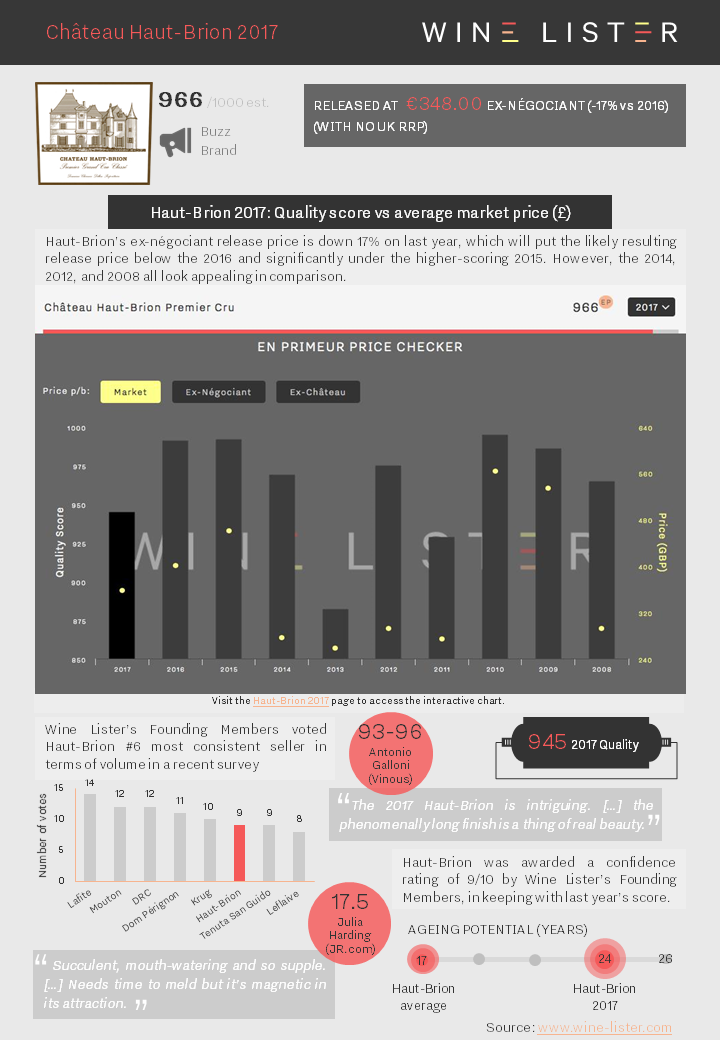 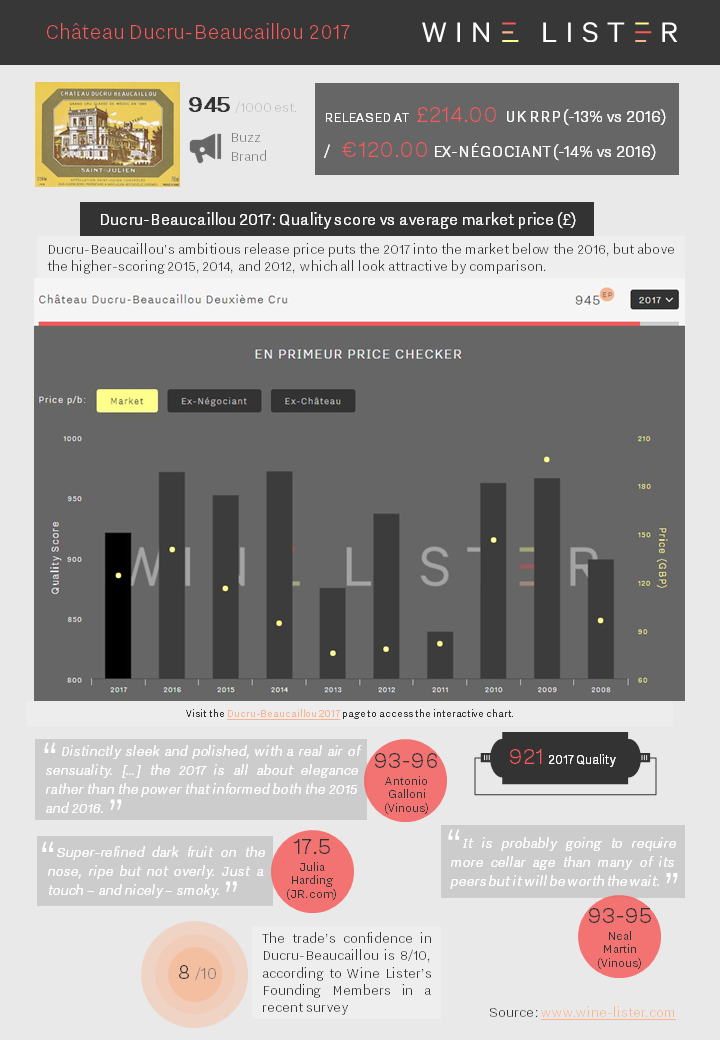