The latest search frequency data is in from Wine-Searcher, and with it we can see which wines enjoyed the greatest popularity gains during July. After the en primeur campaign fuelled the big surges of May and June, July’s top five gainers witnessed more modest gains. There is also more variety this month, with two Champagnes and a Napa joining two Bordeaux right bank heavyweights. 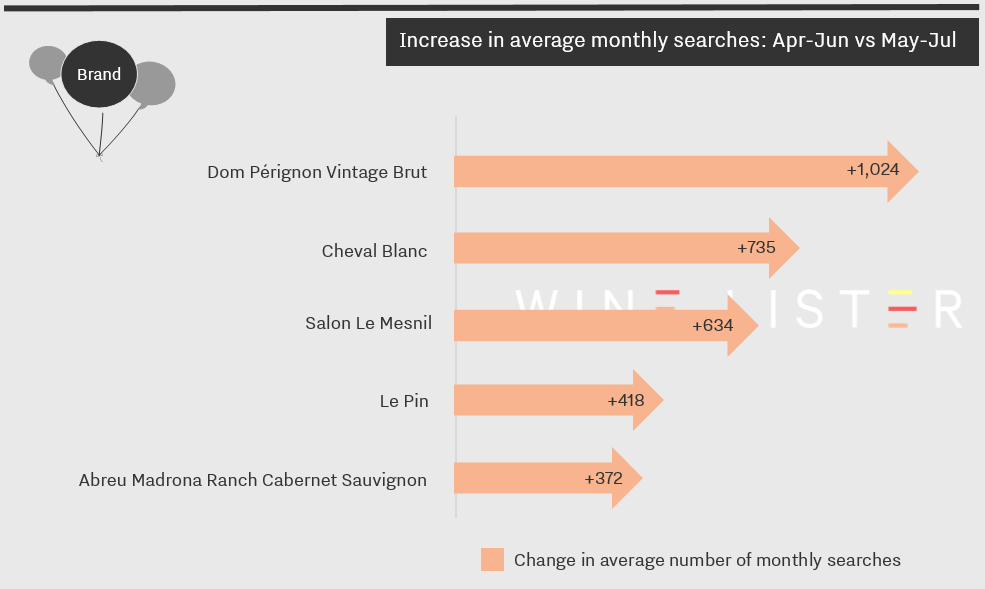 Experiencing the greatest increase in popularity during July was Dom Pérignon Vintage Brut – particularly impressive considering it started from an already extraordinarily strong average of over 54,000 searches each month.

Next came Cheval Blanc, whose 2016 vintage was released in early June, before July saw the release of Salon Le Mesnil 2006. Described by Wine Lister partner critic Antonio Galloni as an “utterly compelling Champagne to follow over the next several decades”, its rise in online popularity suggests that consumers have already started to track its progress.

The last two wines are both produced on very small scales. Le Pin, notoriously rare, released its 2016 vintage in late June, which likely contributed to its increase in online popularity, at least among those lucky few with both an allocation and requisite funds. About 6,000 bottles of Napa Valley’s Abreu Madrona Ranch Cabernet Sauvignon are produced each year. As we saw in our recent post on California’s most expensive wines, production levels play a big role in the region’s prices. Perhaps the rarity of Abreu Madrona, the region’s eighth most expensive wine, is helping to boost its caché.

The best wines for quality, year after year

A wine’s reputation for quality cannot be determined by one vintage alone – the very best must be consistent, year-in, year-out. Today, we’ve analysed our data to determine which wines have the most consistent Quality scores (one of the three categories, alongside Brand and Economics that feed into Wine Lister’s holistic wine ratings).

Assessing all the wines in our database for which there are Quality scores for more than 30 vintages, we analysed the standard deviation of these scores from vintage to vintage. The top 10 wines below are the most consistent when it comes to quality: 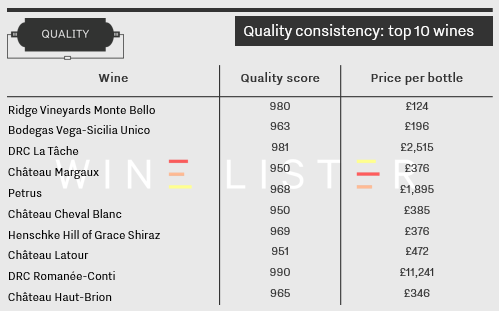 Unsurprisingly, these are all big names that have been able to invest in the newest technologies to see them through the more challenging years. Their reliability is testament to their status as great wines. Seven of the world’s top 10 most consistently qualitative wines are French, although of the five Bordeaux left bank first growths, only Margaux, Latour and Haut-Brion make the cut, joined by Petrus and Cheval Blanc from the right bank.  Domaine de la Romanée-Conti is the only producer to boast two wines in the table: La Tâche and Romanée-Conti, also the two most expensive.

Perhaps unexpectedly, the most consistent wine is also the most affordable. At an average price per bottle of £124, Californian Ridge Vineyards Monte Bello sees limited fluctuation in Quality scores between the years, with the vast majority of vintages scoring between 960 and 990. It is followed by Spain’s Bodegas Vega-Sicilia Unico – whose Quality scores on Wine Lister stretch right back to its 1920 vintage, proving almost a century of consistent winemaking. 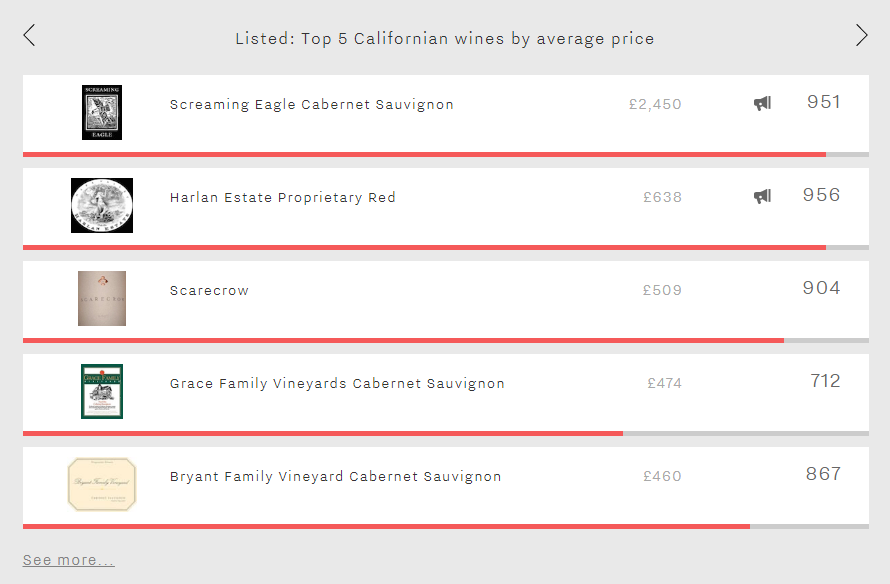 Leading the way is Screaming Eagle, averaging c.7,800 bottles per year. At £2,450 per bottle, it is the 12th most expensive wine in Wine Lister’s database, just £27 below DRC La Tâche.

Harlan, the third highest-rated Californian wine overall, has an average annual production of c.21,600 bottles, and is the region’s second most expensive wine. At £638, it is available at nearly a quarter of the price of Screaming Eagle.

The next three wines all have lower production volumes than Harlan. At £509, Scarecrow has a similar price point to the likes of Lafite (£522) and Masseto (£524). Fourth-placed Grace Family Vineyards Cabernet Sauvignon achieves a Wine Lister score of 712, considerably lower than the others, but again low production volumes (c.6,000 bottles a year) help it to achieve its hefty price tag of £474. Bryant Family Vineyard Cabernet Sauvignon fills the fifth spot at £460 per bottle.

Produced on far greater scales than these five, Dominus and Ridge Monte Bello, Wine Lister’s two overall top-scoring Californian wines, do not make the top five most expensive. The trendline on the chart below confirms the negative correlation between price and production: 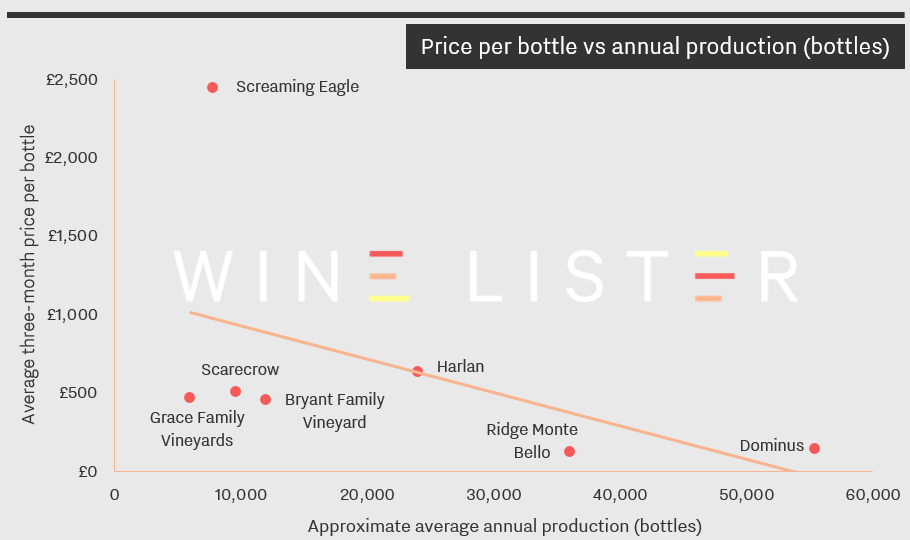 Remember that even if you don’t currently have a Wine Lister subscription you can access all the underlying data behind these five wines as well as those featured in other Top 5s, giving you an insight into the wealth of tools at our subscribers’ disposal.

Price vs brand: getting brand for your buck

Following on from our recent blog on the relationship between price and quality for seven leading wine regions, today we turn our attention to the role that brand strength plays on price for those same regions. The chart below compares the regions’ average three-month market price to their average Brand scores, using the same 50 overall top scoring wines in each region as in the previous post. 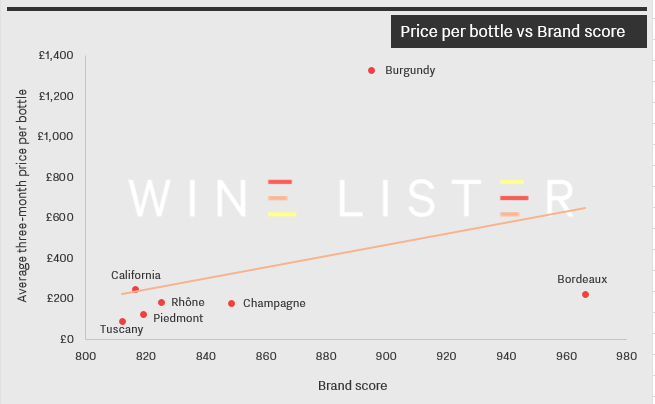 Bordeaux’s crus classés enjoy unassailable brand strength, a product of the success of the region’s classification system and the fact that its châteaux have enjoyed global renown for centuries. If you want brand for your buck, look no further.

Conversely, Burgundy’s extraordinary prices far exceed the level of brand clout commanded by its top crus. Its top wines trail the average Brand score of Bordeaux’s by 7%, but sell for nearly six times as much. This suggests that quality, and perhaps small production levels, play more of a part in the region’s prices.

Price vs quality: getting more for your money

In today’s blog, we’ve taken a look at the relationship between price and quality for seven leading wine regions. The chart below compares the regions’ average three-month market prices to their Quality scores, with the data calculated from each region’s 50 best-scoring wines (in terms of overall Wine Lister score). 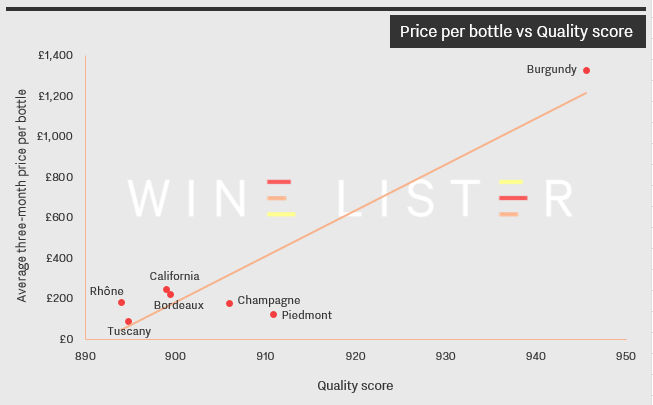 While six regions are clustered relatively close to each other, Burgundy finds itself at the extreme top end of the scale: its wines outperform on quality and have the prices to match. The top 50-scoring wines in Burgundy average a whopping £1,330 per bottle, driven by the likes of DRC La Romanée-Conti at £10,776 and Domaine Leroy Musigny at £7,805.

The Rhône’s wines have the lowest average Quality score but not the lowest prices: at £188 per bottle on average, they are the fourth most expensive of the group. California and Bordeaux display a very similar profile, appearing just above the trendline, indicating that these wines command high prices not simply on account of quality – brand also plays a part.

Champagne and Piedmont, meanwhile, fall below the line, suggesting that as regions they tend to offer value for money. Piedmont’s ranking is particularly impressive: second only to Burgundy in terms of average Quality score, its wines are available for a tenth of the price on average.

Wine Lister has produced its second in-depth regional study, this time on Tuscany – a many-faceted fine wine region that is fast-building its position on the global fine wine stage. We will be revealing some of the findings on the blog in the next few weeks, but the full 35-page report is available for subscribers on the Analysis page.

The study focuses on 50 top Tuscan wines, which we have compared below with 50 wines from Piedmont, Bordeaux, Burgundy, and California. Using the three categories that comprise an overall Wine Lister score – Quality, Brand, and Economics – we can put the region’s global positioning in context. 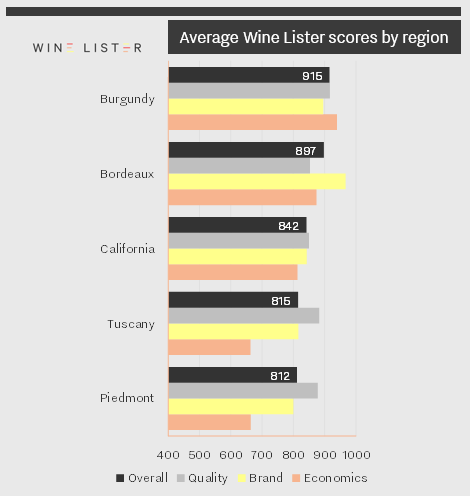 Although Tuscany comes fourth overall – just ahead of Piedmont – its Quality score is bettered only by Burgundy, scoring 883 points to Burgundy’s 917. Quality scores are derived from Wine Lister’s partner critics’ scores and a wine’s ageing potential, and Tuscany’s excellence in this category may be one explanation for its rising appeal.

Tuscany’s Brand score is the fourth best of the group, suggesting that after a handful of top brands such as the Super Tuscans, the rest of the top 50 do not confer the same level of prestige as wines in Bordeaux, Burgundy, or even California. Meanwhile, the region’s commercial clout is the weakest of the group, scoring one point less than Piedmont in the Economics category.

In upcoming posts, we will delve into the trade’s view on Tuscany’s foremost appellations and which are the wines to watch.