Bettane+Desseauve – Wine Lister’s French partner critics – have released their en primeur scores for the 2017 Bordeaux vintage. Here is a glimpse of their top-scoring wines: 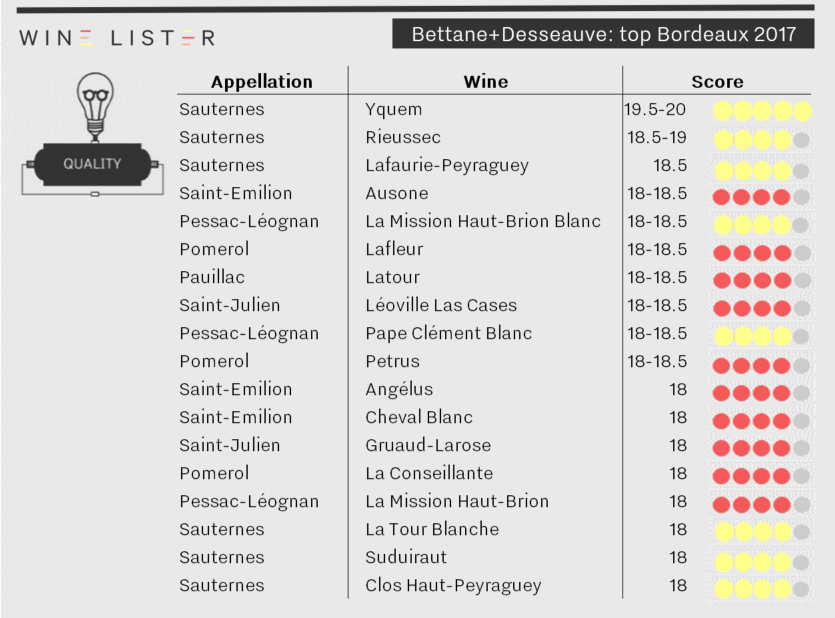 Château d’Yquem is the only potentially perfect wine of the vintage for the French duo. “Another legend ending in 7, worthy of the 1967, but more pure, and the sublime 1937 and 1947 too,” muses the encyclopaedic Michel Bettane.

Yquem was the only white wine to make an appearance in Bettane+Desseauve’s top 2016 Bordeaux, but this year has been joined by a host of other Sauternes (Rieussec, Lafaurie-Peyraguey, La Tour Blanche, Suduiraut, and Clos Haut-Peyraguey), in a vintage which Bettane has marked out as “favourable for the entire Haut-Sauternes sector”.

As for reds, taking more of a backseat than usual, the right bank dominates, with three out of the four Saint-Emilion Grands Crus Classés A scoring 18 (Angélus and Cheval Blanc) or above (Ausone). By contrast only one Médoc first growth – Latour – reaches the 18-point mark.

Joining Ausone and Latour with 18-18.5 are Lafleur, Léoville Las Cases, and Petrus. Our CEO, Ella, tasted Petrus twice – first for a sneak preview with Thierry Desseauve and her father, and then with the Wine Lister team three days later. She is not surprised to see it come out among the top five reds of the vintage, and it must run in the family, because Petrus was also Pa Lister’s favourite.

Bettane+Desseauve’s top table sees standout scores of 18 apiece granted to La Conseillante and Gruaud-Larose. And that in a year where fewer high scores were given in general; 16 2016s scored a straight 19 or above last year, compared to just one in 2017.

Château Latour has released a first parcel of Les Forts de Latour 2012 this morning at €145 per bottle ex-negociant. It is being offered in the UK at c.£153 per bottle. The factsheet below summarises its key points. 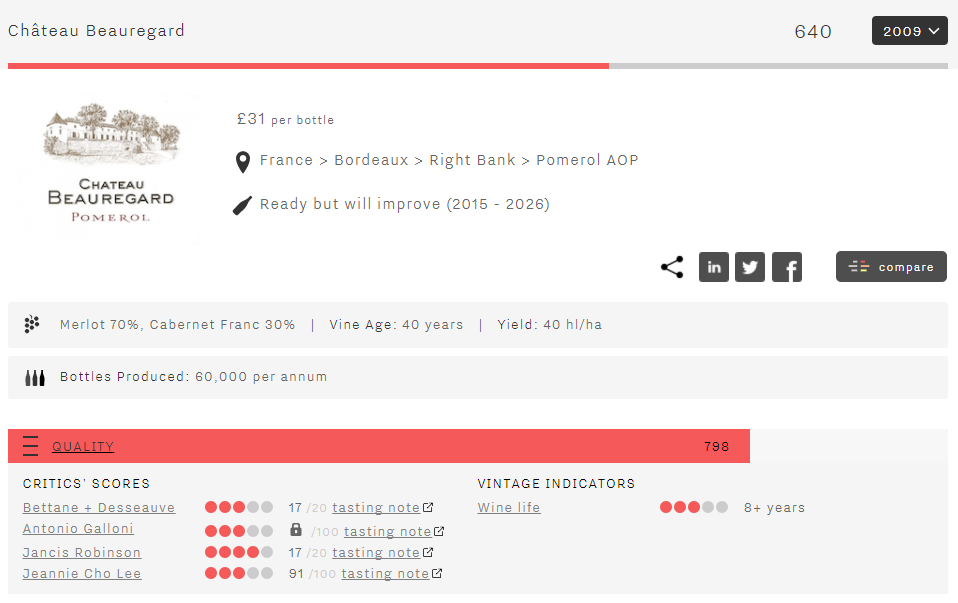 We are thrilled to announce the addition of Jeannie Cho Lee MW as Wine Lister’s fourth partner critic, representing the Asian market.

Wine Lister gathers data from multiple sources to assess thousands of wines on a truly holistic basis. Scores are made up of three main categories: Quality, Brand, and Economics. Critic ratings form a vital part of the Quality category, providing reliable scores and drinking window information.

Jeannie Cho Lee is an independent wine critic, a university professor, and an award-winning author who in 2008 was the first Asian to become a Master of Wine. Based in Hong Kong, she writes about wine on her website, www.jeanniecholee.com, and has also published several books, including Asian Palate.

Adding to our unique collaborations with three of the most reputable wine critics in the world’s major fine wine markets – Jancis Robinson (UK), Antonio Galloni (Vinous) (USA), and Bettane+Desseauve (France) – we are delighted to welcome Jeannie Cho Lee to represent the key Asian fine wine market. This careful addition will help us in our goal of providing ever more reliable and accurate ratings and analysis, while crucially maintaining the high standards of this elite pool of critics. Jeannie Cho Lee’s scores have been added to those of our existing partner critics, and fed into Wine Lister’s bespoke algorithm to produce a Quality score out of 1,000 points. Wine Lister takes each critic’s minimum and maximum wine ratings and spreads these back out over the entire scale. As each wine critic scores differently (not just on a different scale), we also account for the frequency of ratings and normalise scores for fair comparison. Each critic is weighted equally. 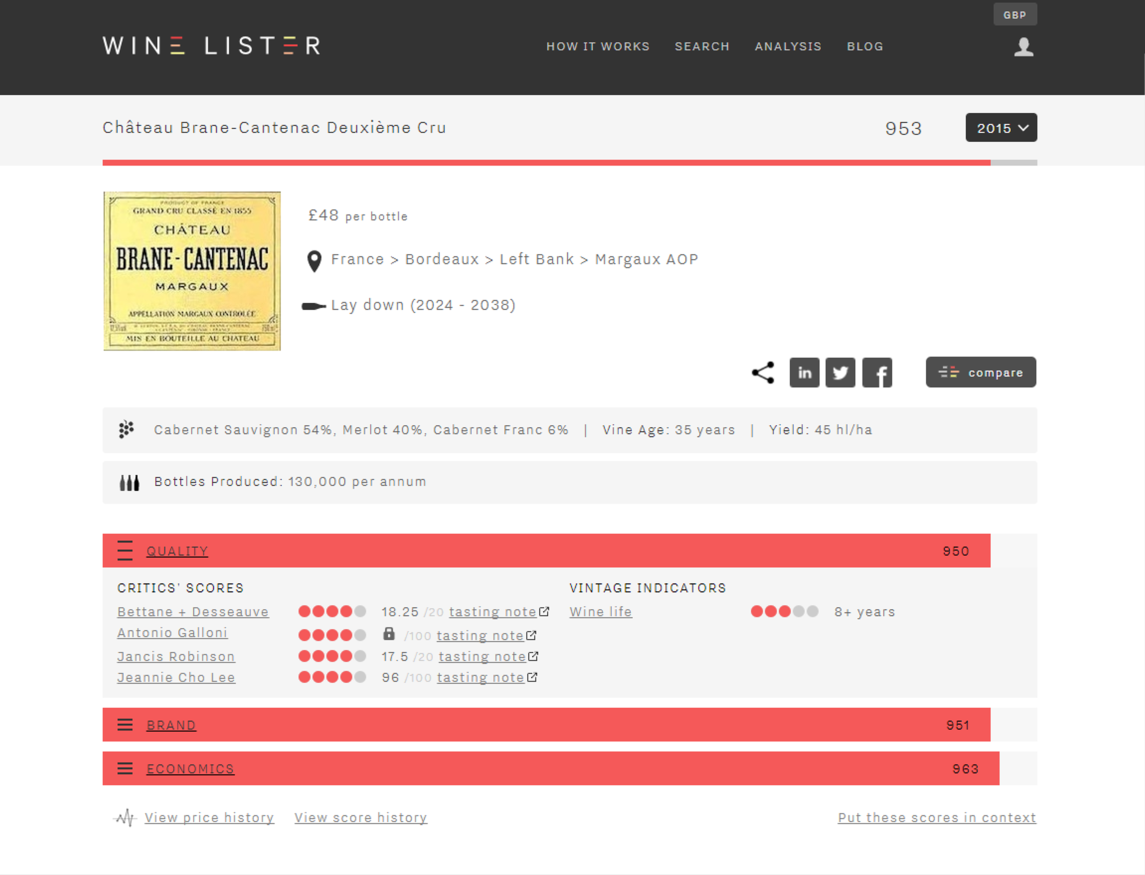 You may notice that some scores have changed for wines that have not been rated by Jeannie. In order to meet our goal of having the most comprehensive and up-to-date information, and the most rigorous rating algorithm, we have increased the sample set of scores upon which we carry out the normalisation between critics. This now includes the 18 months’ worth of new critic scores since our launch.