Widely considered the most romantic (if most expensive) day of the year, Valentine’s day often brings with it pressure to spend more to prove one’s admiration. To help you avoid compromise on your Valentine’s day drinking, Wine Lister has put together a list of red Value pick MUST BUYs with WL scores above 95.

Click here to view all red Value pick MUST BUYs, or read more below. 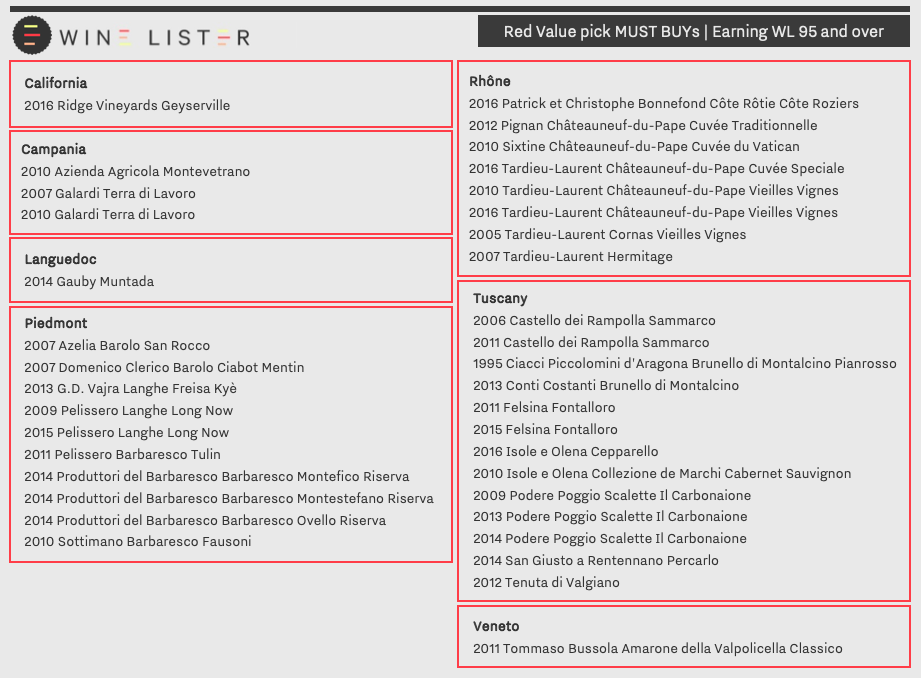 Of the 37 red Value Pick MUST BUYs earning WL 95 and over, a substantial 27 wines hail from Italy, suggesting the impressive quality-to-price ratios offered by many of the country’s producers.

A passion for Piedmont

Famed Piedmont cooperative, Produttori del Barbaresco appears three times on the list, with the 2014 vintages of its Montefico Riserva, Montestafano Riserva, and Ovello Riserva. Despite hailstorms damaging several Barbaresco vineyards in 2014, Produttori’s premium sites are subject to rigorous grape selection, meaning its single-vineyard wines retained quality in the vintage. Achieving the highest score of the three labels from Wine Lister partner critic, Antonio Galloni (96) who calls it a “potent, structured Barbaresco”, the Montefico Riserva can be purchased from Hatton & Edwards for £42 per bottle (in-bond).

Moving further south, Podere Poggio Scalette’s Il Carbonaione is represented by its 2009, 2013, and 2014 vintages, which all achieve WL scores of 95. With over 10 years of age, the 2009 is described by Wine Lister partner critic, Jancis Robinson, as offering a “very voluptuous, exotic nose”, with notes of “both herbs and spices – and some meatiness […] very exciting and bursting with health”. It can be bought from Atlas Fine Wines for £33 per bottle (in-bond).

A romance with the Rhône

Representing the New World, Ridge Vineyards’ Geyserville appears in the line-up with its 2016 vintage. A single-site blend of 73% Zinfandel, 17% Carignan, 7% Petite Syrah, and 3% Alicante Bouschet, it achieves a WL score of 95, and is described by Antonio Galloni as offering “black cherry, graphite, lavender, and spice”, with “a purity […] that is absolutely striking”. Also noted by Jancis Robinson as having “snug, focused aromatics with hints of floral lift” and “a palate bursting with flavour”, the 2016 Geyserville can be acquired by the bottle from Lay & Wheeler for £33 (in-bond). 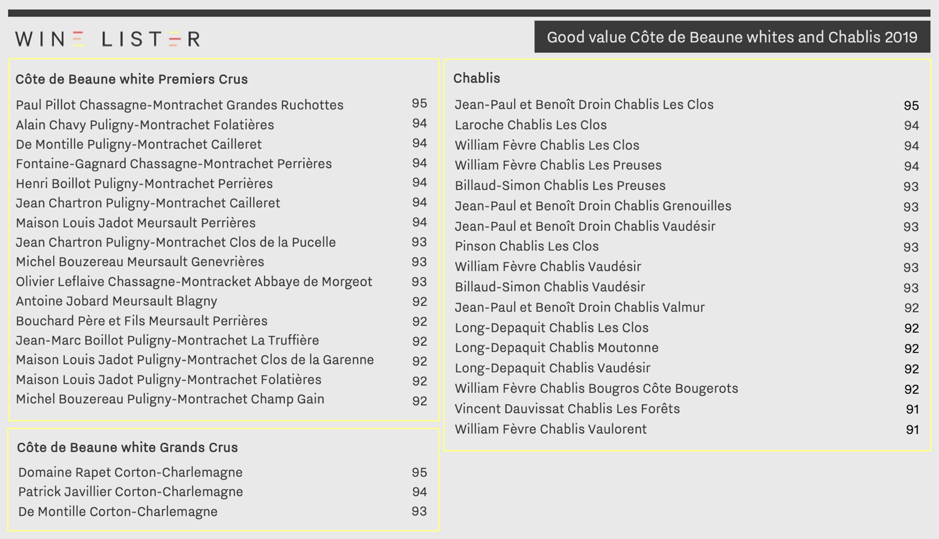 Rounding up the second week of Place de Bordeaux releases

Sampled by the Wine Lister team at last week’s CVBG Beyond Bordeaux tasting, the latest Place de Bordeaux releases cover a range of regions and price points. Below we examine some of the highlights:

Released at c.£225 per bottle (in-bond), Beaucastel Hommage à Jacques Perrin 2018 enters the market below the current prices of the two previous vintages (see graph below). Hommage was a Wine Lister favourite this year. We detected bright, candied strawberries, orange skin, and clove, while its mouthfeel offered a momentary grip of tannins, followed by a silky-smooth finish. 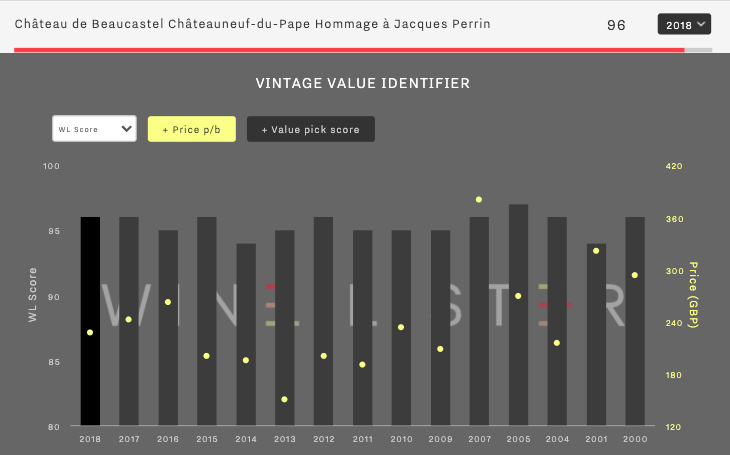 With a 15% reduction in volume released this year, alongside the château’s unwavering reputation for producing benchmark quality in Châteauneuf-du-Pape, the new vintage is worth considering for future drinking. In the meantime, back vintages 2015, 2012, and 2009 also look good in terms of price and quality. Writing for JancisRobinson.com, Tom Parker MW awards the 2018 17+ points, noting “meaty, earthy fruit on the nose, very complex already”, and “damson and morello cherry” on the palette.

Inglenook Rubicon 2017 also entered the market on Wednesday at £120 per bottle (in-bond). Produced by the estate since 1978, the flagship wine has maintained a score of 95 or above from Wine Lister partner critic, Antonio Galloni, over the past five vintages, and the latest release is no exception. Awarding it 95 points, he describes notes of “red fruit, cedar, sweet pipe tobacco, menthol and licorice” that “all develop in the glass”. Our team detected complex spice and oak, softened by a gentle hint of vanilla.

Released yesterday at £54 per bottle (in-bond), Cheval des Andes 2017 receives 17.5+ points from Tom Parker MW for JancisRobinson.com. He describes “intense and expansive black fruit and spices on the nose, with a hint of black olive and violet”, and “blueberry, violet and dried herbs” on the palette. He concludes, “I expect this to become even more impressive after 5 years in bottle, though you could drink it sooner”. Having tasted a flight of recent back vintages at the time of last year’s release with Technical Director, Gérald Gabillet, the Wine Lister team can attest to Cheval des Andes‘ continued upward quality trajectory. We noted a definite complexity within the latest vintage, which offers a nose of Parma violets, white pepper, and bright berries. Cheval des Andes 2017 enters the market under current prices of the last three vintages, and is worth snapping up if there remains any availability.

Solaia 2017 completes the quartet of releases from the past couple of days. Matching last year’s release price of £175 per bottle (in-bond), the latest vintage comes onto the market comfortably under current prices of the previous two (which have increased their respective values by c.20% since release – see chart below). Wine Lister partner critic, Antonio Galloni, awards Solaia 2017 95+ points, and describes “terrific aromatic expansiveness and tons of persistence”. There is anticipation for this score to improve: “I can’t wait to taste it with a bit more time in bottle”, he adds. We tasted the 2017 last week, and were indeed impressed with its development, finding an elegant nose of violet drops and cocoa powder. Given its impressive quality in such a challenging year, and the wine’s history of good price performance post-release, this is well worth securing now. 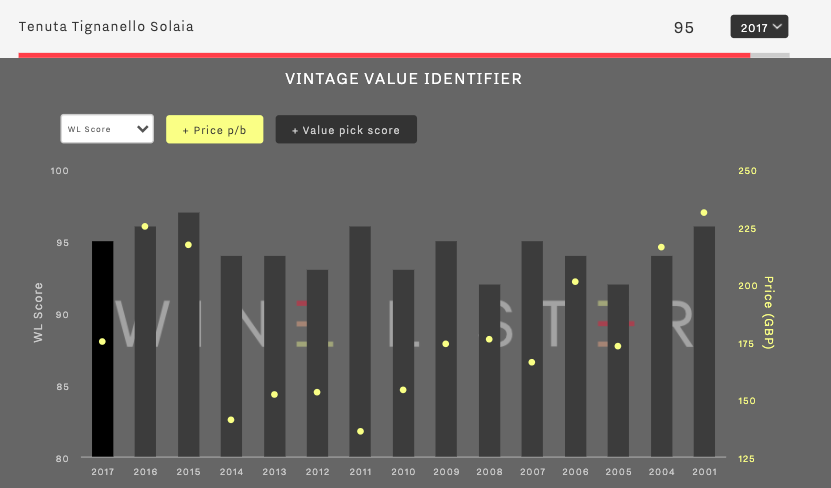 Featured on each wine page, the dynamic Vintage Value Identifier gives a clear visual of quality-to-price ratios across the vintages of a given wine, and applies a Value Pick Score to measure the relative value.

By performing the price analysis for you, this tool pinpoints exact vintages of your favourite wines that are the best options to buy or sell, based on the impressive quality for their price.

See the example of Montrose below, or by exploring its wine page here. 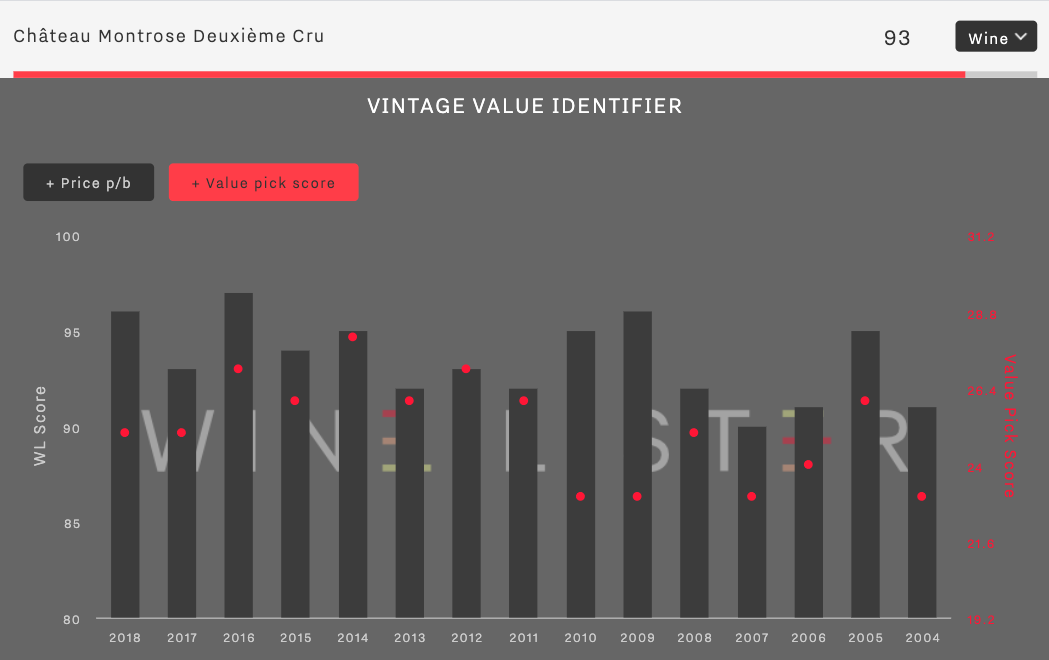 As indicated by the red dots, and values on the right-hand axis, Montrose’s Value Pick Score fluctuates between vintages. The 2004, 2007, 2009 and 2010 vintages share the lowest Value Pick Score (23), while the 2014 Montrose achieves the highest score of 28.

The 2014 vintage tends to represent excellent value across the board in Bordeaux. This is due to its good (if not excellent) quality overall, and its release after the lesser-quality 2013 (which kept release prices down). Montrose’s 2014 was awarded 96 points by Wine Lister partner critic, Neal Martin, who notes, “a bouquet that exudes class and sophistication: pure and mineral-driven black fruit, cedar and pencil lead, hints of blueberry developing with aeration although it never impedes upon the sense of terroir”.

While the true benefit of the Vintage Value Identifier lies in the Value Pick Score, it is still possible to view the pure price vs. quality analysis, as illustrated below: 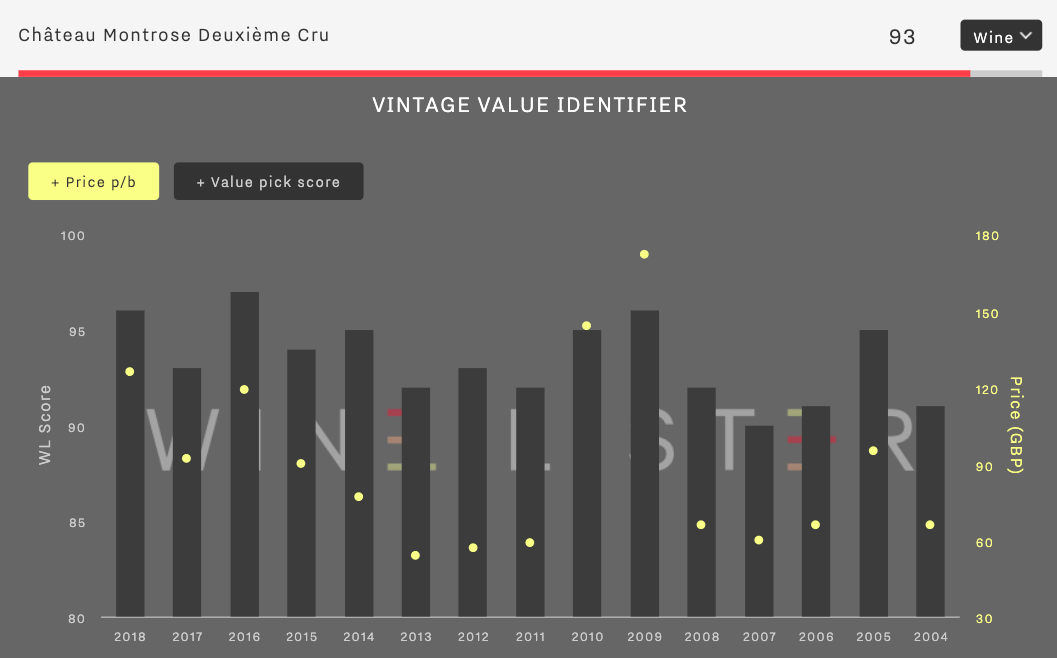 While Montrose 2009 achieves the second-highest WL Score of the featured vintages, it also commands the highest price (£172 per bottle in-bond, when buying by the case). Achieving MUST BUY status, the 2014 vintage is conversely priced at £77 per bottle in-bond for a similar level of quality (hence the higher Value Pick Score). The 2014 Montrose is available to purchase from Corney & Barrow, Cult Wines, Justerini & Brooks, and BI Fine Wines (the latter in magnums only).

Guiding your future purchases, you can identify good value in back vintages of any wines by using the Vintage Value Identifier on each wine’s page. Click here to start your own analysis.

Wine Lister is currently offering a range of portfolio analysis services to private clients. If you are interested in having your wine collection analysed by our team of fine wine data experts, please don’t hesitate to contact us.