A selection of MUST BUYs you must try in 2021

Wine Lister has put together a selection of MUST BUYs that have reached the perfect point of maturity in 2021. With a minimum score of 93, these picks take into account wines entering their apogee on the basis of Wine Lister partner critics’ drinking windows, and our own assessment of the optimum point with them, depending on region, grape variety, and style.

Read more below to discover some top wines that are at the peak of their drinking windows, or see more Wine Lister MUST BUYs here. 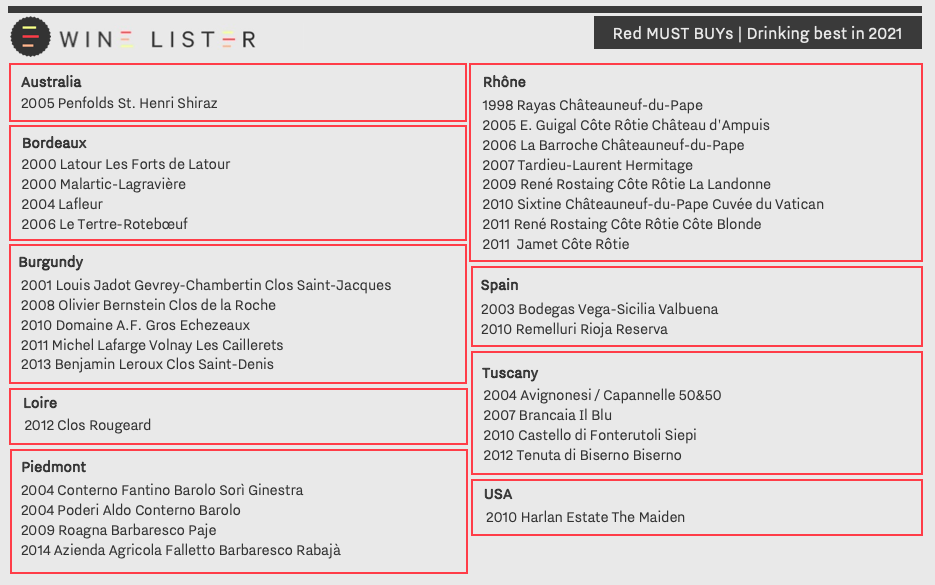 One of two Bordeaux 2000s that feature in our selection, Latour’s second wine, Les Forts de Latour aptly illustrates the success of a vintage that is widely considered one Bordeaux’s recent bests. With over 20 years of ageing under its belt, the 2000 Les Forts de Latour has a WL score of 94, and is described by Wine Lister partner critic, Jancis Robinson, as possessing a “minerality and lusciousness-yet-dryness on the finish”. With 10 more years to enjoy it, it is available to purchase from Lay & Wheeler Wine Merchants for £198 per bottle (in-bond).

In Burgundy, Michel Lafarge’s 2011 Volnay Les Caillerets is currently at the peak of its drinking window, and is noted by Jancis Robinson as offering “rich, round and charming red fruits” that “firm up on the end of the palate”. With a WL score of 94, it has four more years of optimum drinking (Jancis notes there is “lots of fun to be had”), and can be purchased from Goedhuis & Co for £95 per bottle (in-bond).

At just £28 per bottle (in-bond), the Rhône’s Château Sixtine achieves a WL score of 95 with its 2010 Cuvée du Vatican. Writing for Vinous.com (another Wine Lister partner critic outfit), Josh Raynolds describes its “explosive perfumed bouquet [that]evokes dark berry preserves, incense, licorice and candied flowers”. Currently drinking at its best, this Value Pick is worth snapping up (by the case of 12, from Bordeaux Index).

Crossing into Italy, Roagna’s 2009 Barbaresco Paje is one of four selected MUST BUYs from Piedmont that can be enjoyed at their best in 2021. “The 2009 is gorgeous. Sweet tobacco, brown spices, dried cherries, menthol and leather are some of the notes that take shape in the glass” writes our partner critic, Antonio Galloni (Vinous). The Buzz Brand is available from Bordeaux Index for £75 per bottle (in-bond).

Wine Lister’s selection of white MUST BUYs drinking best in 2021 includes five Burgundian picks from a range of vintages. Vincent Dauvissat’s 2012 Chablis Vaillons is a new MUST BUY, and achieves a WL score of 93. A great year for the appellation, Chablis has an average WL score of 95 across its top wines in 2012 (explore Wine Lister’s Vintage Chart here). Antonio Galloni notes that Dauvissat’s Chablis Vaillons “opens with the most exquisite, expressive aromatics imaginable. Weightless and totally gracious in the glass, […] a wine of sublime understatement”. It can be purchased from Latimer Vintners for £80 per bottle (in-bond).

View all Wine Lister MUST BUYs here, or explore our Vintage Chart to access the top wines per year.

As we stayed hunkered down for much of 2020, Wine Lister was working on a new interactive tool for its website users: the Vintage Chart. Adding further breadth to our rating and information hub, this new feature allows side-by-side comparisons of top vintages from various countries, regions, and appellations.

See the example of Côte de Nuits reds below for some of the best of Burgundy’s back vintages, or explore the Vintage Chart for yourself here. 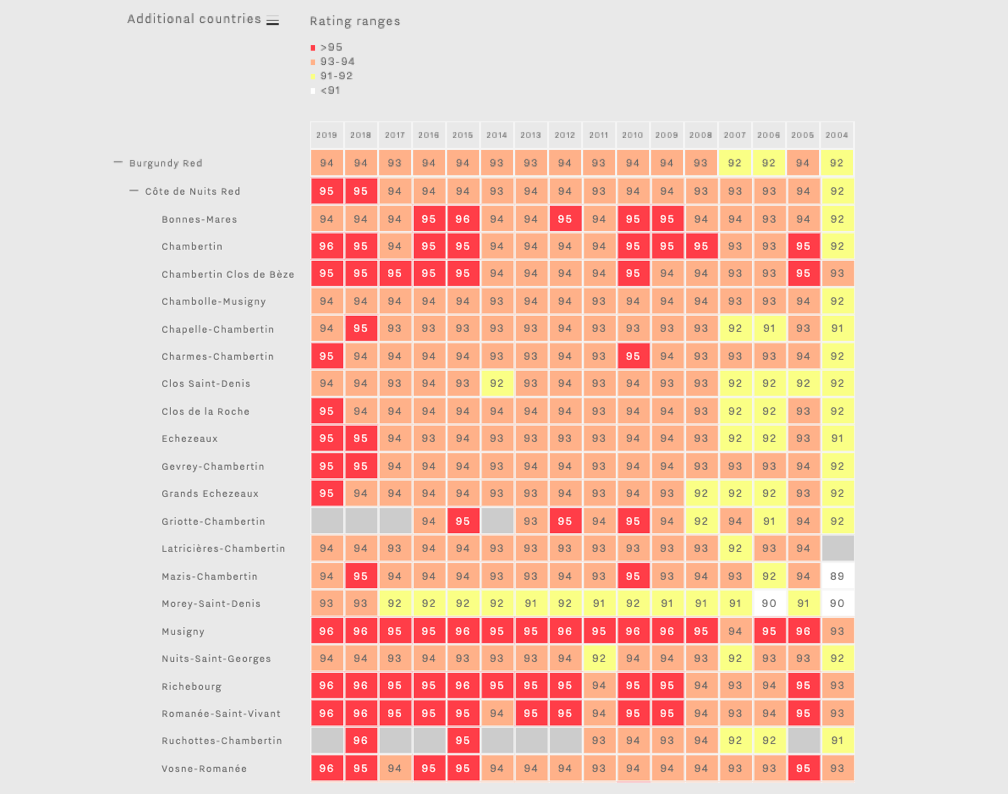 The Vintage Chart above compares the past 16 vintages of Côte de Nuits reds by WL score, based on the average WL scores of the top-performing wines in each “line”.

Informed by the latest available scores from two of Wine Lister’s partner critics, Jancis Robinson, Jasper Morris, and Neal Martin (Vinous) a look at the 2019 column reveals the success of Musigny, Richebourg, Romanée-Saint-Vivant, and Vosne-Romanée in the most recent vintage currently being released en primeur. The top-performing wines across the four appellations achieve an average WL score of 96, followed closely behind by Chambertin, Chambertin Clos de Bèze, Charmes-Chambertin, Clos de la Roche, Echezeaux, Gevrey-Chambertin, and Grands Echezeaux all gaining an average WL score of 95 in 2019.

Using the horizontal scroll to explore back vintages, one can see that Musigny is the most consistently high-scoring Côte de Nuits red appellation, with its top wines achieving an average WL score of 95 and above in the 15 vintages since 2004.

Click here to explore the Vintage Chart for yourself, or watch our video demonstration to find out how to get the most out of this new interactive tool here.

Wine Lister Pro members have access to a more extensive Vintage Chart, which integrates our holistic 360° rating system to visualise the average scores in the Economics and Quality categories, as well as by overall WL Pro score (which also takes into account a wine’s Brand clout). Log in to your account to view the Pro Vintage Chart here, or find out more about the Pro subscription here.