The best of both Banks: Lafon-Rochet 2020

With Bordeaux 2020 en primeur fast approaching, Wine Lister reports on one of the latest updates to emerge from the Médoc, informing your investment decisions over the coming months. In collaboration with Château Lafon-Rochet, we speak to Basile Tesseron to find out more about the inaugural partnership of two of the most revered consultants in Bordeaux to work on the estate’s 2020 blend: Jean-Claude Berrouet and Eric Boissenot. 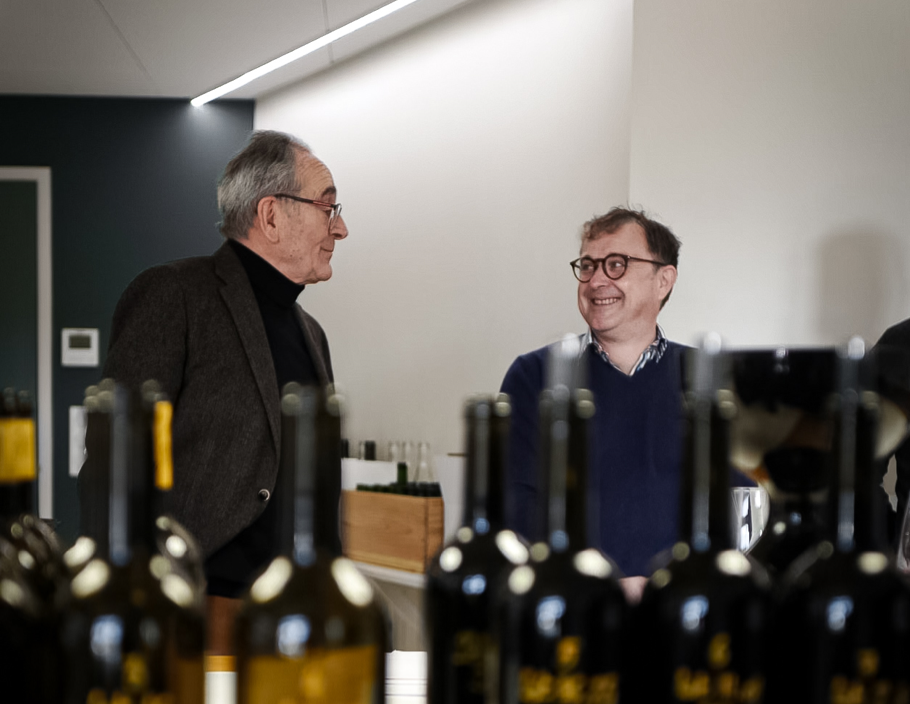 Renowned for his expertise in Merlot production at Pomerol’s Château Petrus, Lafon-Rochet’s existing consultant, Jean-Claude Berrouet has been working at the estate alongside his son, Jeff, since 2012. Basile tells us that his team “admire the quality of the tannins present in the wines that Jean-Claude consults on, as well as his expertise with grapes coming from clay soils”.

With almost half of the estate based on clay, and the other half on dry, deep, gravely soils, he explains that “it was logical to combine Jean-Claude’s work with that of Eric Boissenot”, whose father, Jacques, has also been working with Lafon-Rochet for several years. With a reputation as oenologist to some of the Médoc’s top châteaux, Eric Boissenot is known for his dedication to the accentuation of terroir.

This meeting of minds from the Right and Left Banks for the first time illustrates another step in the evolution of Lafon-Rochet under Basile’s guidance. Since taking over the running of the estate in 2007, he has overseen the construction of two new cellars, extensive replanting, and a dedicated biodiversity programme. Having spent several years conducting agroforestry trials, last year Lafon-Rochet embarked on an agroforestry scheme that aims to make the estate wild once again through assisted natural regeneration. As well as installing bat nesting boxes and beehives, the property aims to plant 13,000 trees on its land by 2022.

Click here to sign up to Wine Lister’s free newsletter to keep track of everything en primeur over the coming months, including our recommendations on which releases to buy.

WL PR offers a dedicated communications service to help fine wine producers tell their story within the UK market. Head to our services page here to find out more.

Wine Lister attended an online tasting of this new release, as well as Guidalberto and Le Difese 2019, hosted by Armit Wines and Sassicaia’s third-generation director, Priscilla Incisa della Rocchetta. Armit’s Managing Director, Brett Fleming noted the uptake on all three wines has been excellent: “it has been an extremely successful launch from Tenuta San Guido over the past two weeks. Update and demand have been far in excess of anything we’ve been able to manage”.

Though all three wines are made in the large majority from international grape varieties, Priscilla’s observation that “Cabernet [has] found its sense of place in Bolgheri” shines through the wines. Each has its own distinct character, but with a fundamentally Tuscan undertone.

Sassicaia began as the passion project of Marchese Mario Incisa della Rocchetta. While studying agriculture at the university of Pisa, he developed a penchant for wine from Cabernet vines, and subsequently invested in his own, so as to have wine for his family and friends that appealed to his tastes.

During the Zoom tasting, Priscilla told us that in the 1960s, Marchese Mario’s third son, (and Priscilla’s father) Marchese Nicoló, managed to convince him to begin distributing the wine, “transforming his hobby into something resembling a business”. Over the last half-century, the agricultural focus of Sassicaia’s 2,500-hectare estate has shifted increasingly towards top-quality winemaking. Still continued today nonetheless is the breeding of race-horses on the estate, as well as the preservation of a 500-hectare wildlife reserve. 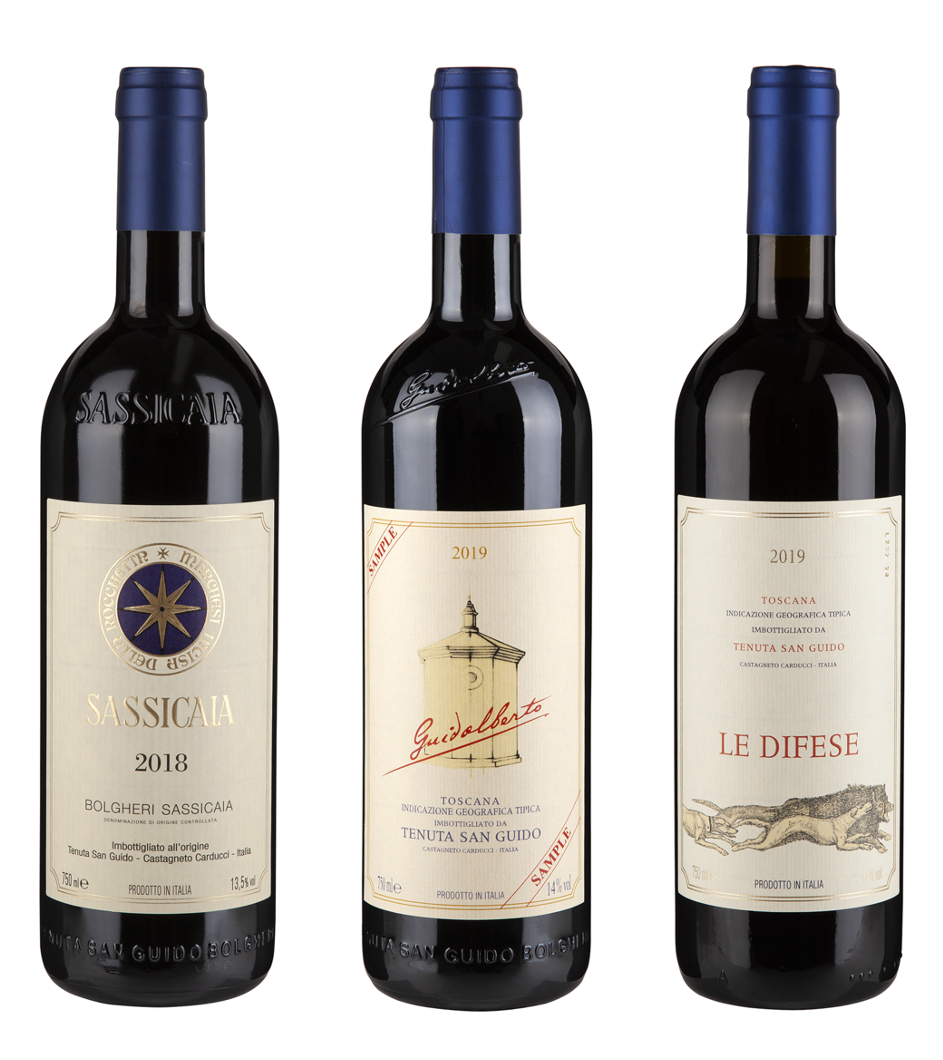 This is the 50th vintage of Sassicaia to be released onto the global wine market. Priscilla notes that “8” is usually a lucky number, and this was the case once again for the growing season resulting in this year’s anniversary release.

The wine leaps from the glass, with an energetic nose featuring suave red fruit, and a floral note of cherry blossom. The palate shows great depth – red cherries and plums as well as an earthier undertone, matched with a fine, elegant texture, particularly lifted by the wine’s vibrant acidity.

The only wine of the three tasted from a cask sample, the latest release from Guidalberto shows a sultry wine with impressive structure, yet seamless integration of its elements. The fruit profile is darker than its big cousin, but the same lift and freshness resounds on the palate, giving the wine a round and long finish.

Priscilla explains that the 2019 vintage was “warmer than other preceding vintages, not as much as 2017 or 2012, but comparable with 2009”. She continues, “we had a dry and mild winter, cool and rainy spring, but a regular summer, apart from rain during the middle of August which brought fresh air that allowed grapes to stay longer on the vines”. This small interruption to the ripening gave the Merlot a little extra time to soften.

She shares with us during the tasting the big news for Guidalberto – after postponing building plans for a brand new cellar of its own due to Covid restrictions, the works are finally underway, and the wine is set to have its own home, completely separate from Sassicaia, by 2023.

After nearly 20 years in production (its first vintage was 2002), Le Difese proves itself a vibrant and well-balanced drinking wine. The 2019 shows an intense and immediate nose of sour cherry, and pure, juicy red berries on the palate.

Priscilla comments on its design; “[It] should be a wine that’s easy to drink, enjoyable young, aromatic but with some good structure because of the Cabernet Sauvignon”. The winemaking team has chosen to increase the amount of Sangiovese in the blend of the 2019 (from 30% up to 45%), so as to better service market demand for an easy-drinking wine that is approachable younger.

Over two years ago, Wine Lister published a blog on Tuscany’s 2018 vintage (recap here), which has since become the second most-read article on our site. With several 2018s entering the market over the past six months, and more scheduled for release this year, news of the vintage remains relevant.

To complete the picture first painted in our report on the 2018 harvest, we examine how some of the wines discussed have performed so far, and whether predictions on the vintage have come to fruition. 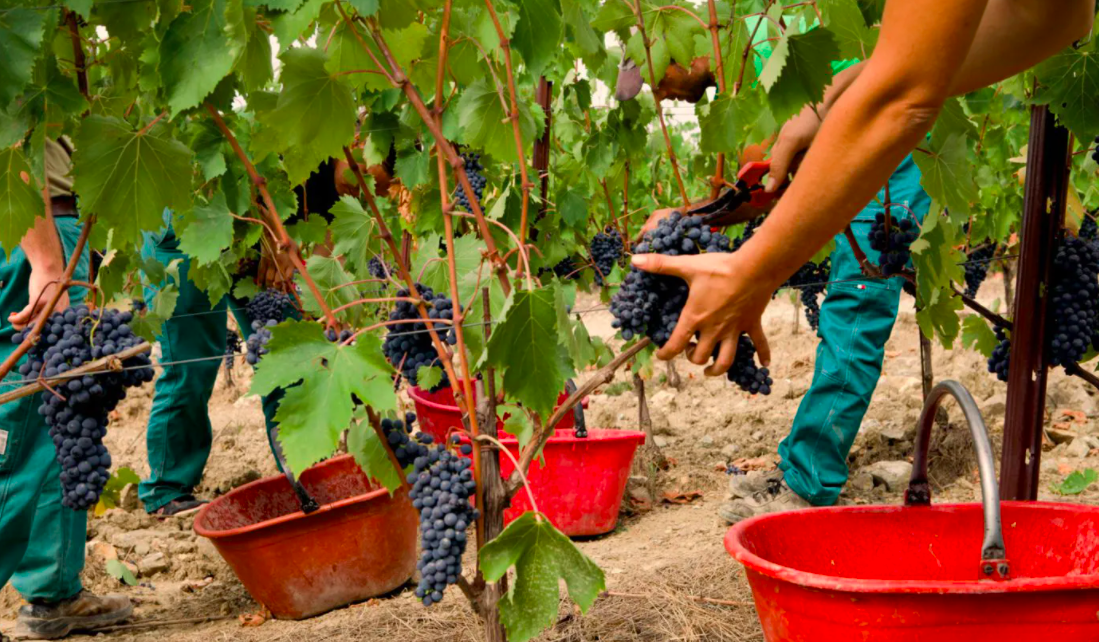 A prized picking – the 2018 harvest at Castello di Fonterutoli

Predicting in 2018 that “the vintage might fall between the opulent 2015s and the structured 2016s in terms of quality and style”, Castello di Fonterutoli’s Giovanni Mazzei underestimated the year. The estate’s 50% Sangiovese and 50% Merlot blend, Siepi, achieves its highest score from Wine Lister’s partner critic, Antonio Galloni in 2018 (97) – five and two points above the 2015 and 2016, respectively. Antonio notes it is “rich, pliant and creamy”, offering “all of the seductiveness of Merlot with the bright acids and grip of Sangiovese”. The 2018 Siepi can be bought from Petersham Cellars for £70 per bottle (in-bond).

Estate Director at Ornellaia and Masseto, Axel Heinz told Wine Lister in 2018 that his “fermenting wines are silky and fragrant”, and that he predicts “a more delicate vintage”. Indeed, Antonio Galloni recently wrote on the 2018 Ornellaia that “readers should expect a silky, aromatic Ornellaia in line with vintages such as 2004 that are more about finesse than raw power”. Having been previewed by members of the fine wine trade and press in a virtual seminar last week (recap our recent blog here), it was awarded a score of 97 by Antonio. The 2018 Ornellaia will be released onto the market at the beginning of April.

Due for release through the Place de Bordeaux in September, Masseto’s 2018 vintage was the first to be made in its own winery, having previously been vinified at Ornellaia. Awarding it 98 points, Antonio notes that it is “silky, mid-weight and supremely gracious”, with notes of “inky red/purplish fruit, cedar, lavender, espresso, sage and mint”. Wine Lister sampled the second release of Masseto’s second wine, 2018 Massetino, in September 2020, and was certainly impressed by its complexity, with expressive notes of dark fruit, cocoa, and spice. While it has limited remaining market availability, it can be purchased from Cru World Wine for £307 per bottle (in-bond).

Describing 2018 as “a good year”, Fattoria Le Pupille’s owner, Elisabetta Geppetti, told Wine Lister that the Bordeaux varietals of her flagship wine, Saffredi, fared particularly well. Antonio Galloni gives it 96+ points, and writes that “the 2018 Saffredi is a regal, elegant, supremely polished wine”, which “may very well be the most refined Saffredi I have ever tasted”. Recalling notes of “sweet red cherry, plum, mocha, licorice and cinnamon”, he concludes; “don’t miss it”. It can be bought from Berry Bros & Rudd for £60 per bottle (in-bond).

Keep track of new Tuscany 2018 scores from Wine Lister partner critics here, and watch this space for future analysis on the vintage.

Last week, Wine Lister joined members of the fine wine trade and press, gathered behind their screens, for the unveiling of Ornellaia’s annual Vendemmia d’Artista collaboration. With each new vintage release, the Ornellaia team chooses a word to characterise the latest growing season and its resulting wine, and selects an artist to bring the word to life on limited-edition labels of the Ornellaia bottle.

Marking the winery’s 13th edition of Vendemmia d’Artista, the 2018 vintage has been coined “La Grazia” – Grace. Estate Director, Axel Heinz, explains that the choice of name is due to 2018 being “a wine that has no hard edges”, and one “all about symmetry, proportion…a graceful expression of Ornellaia”.

Indeed, the higher proportion of Merlot than Cabernet Sauvignon in the latest vintage blend – an exception for the estate – has produced what we found to be a soft and silky wine with a lively perfume and elegant, precise fruit. Ornellaia’s CEO, Giovanni Geddes da Filicaja, notes that the wine really came together “at the time of blending”. He adds, “all the pieces were good, but once we put them all together, it became a really gracious wine”.

That the wine should be so-named came as somewhat of a surprise to Heinz. He reveals that “it was really after the year of ageing and when we sat down in the blending room, that the wine revealed itself to us”. He describes the vintage as “one not without challenges”, expanding thus: “usually [we have] a relatively dry Mediterranean climate. In 2018 we had Mediterranean sun but at the same time enough rainfall to slow the ripening down, and create a wine that is all about balance”.

Belgian artist, Jan Fabre, was chosen to bring La Grazia to life, and limited-edition bottles in various formats will feature his work, as shown in the image below. 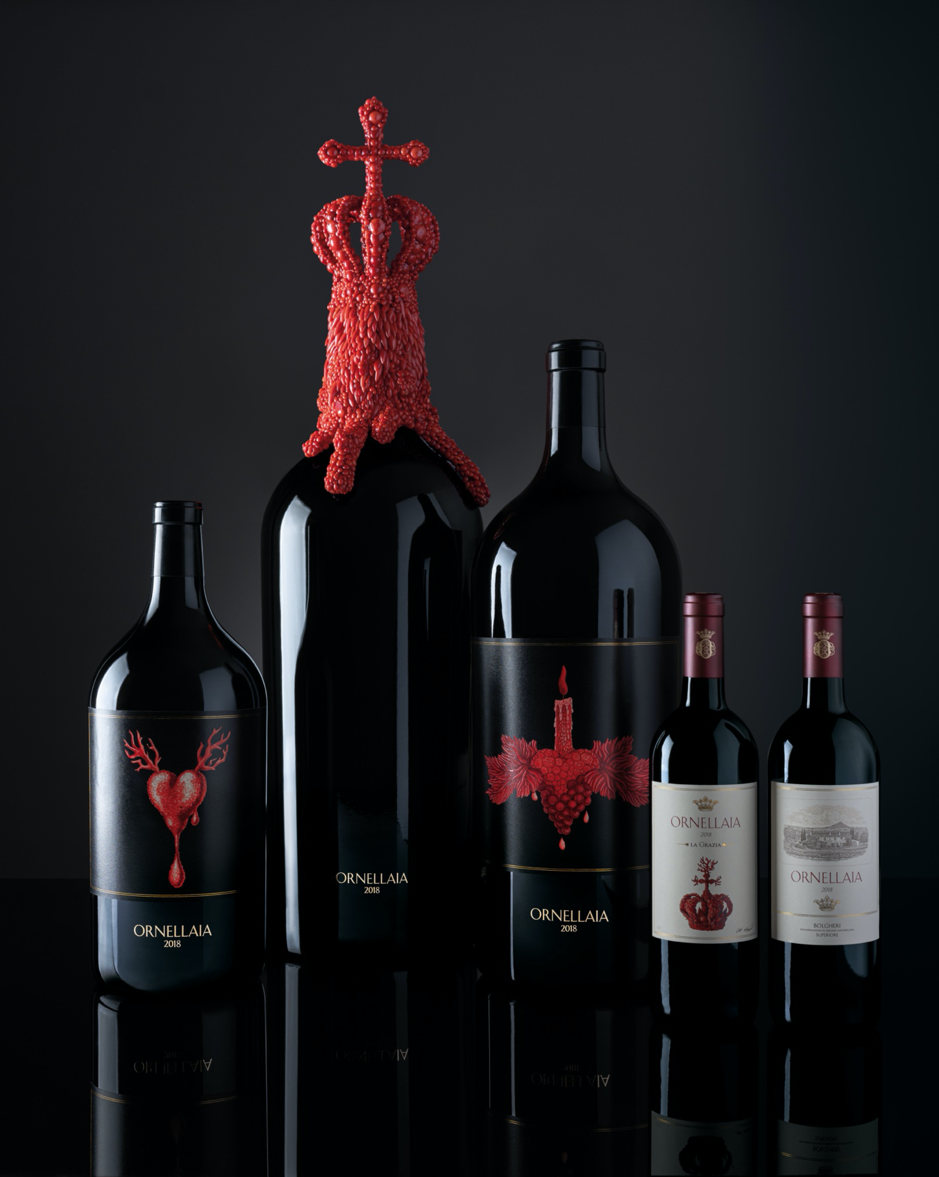 Ornellaia’s art curator, Bartolomeo Pietromarchi, explains the artistic concept as “a way to express balance between beauty and taste”, as well as to “explore the relationship between the senses”. Fabre has sculpted three works from precious red coral, which adorn Salmanazars due for auction in September; “A Candle of Mercy”, “The Crown of Kindness” and “The Heart of Virtue”.

Further bottles feature drawings that bring out the texture of these sculptures – indeed a limited number of 12-bottle cases of Ornellaia 2018 will each contain one bottle with Fabre’s crown label design.

The 111 limited-edition, large-format bottles will be auctioned through Sotheby’s in September 2021, and all proceeds will go towards Ornellaia’s ongoing support of the Mind’s Eye project at the Guggenheim museum.