Popularity at a price: Bordeaux in 2020

Part I of Wine Lister’s annual in-depth Bordeaux report: For better, for worse, examines the state of the market for Bordeaux wines, in the context of 2019 en primeur.

As well as providing insight into the wine trade’s latest position on key wines of the region, the study examines Bordeaux’s disconnect between consumer popularity and its market performance at the start of 2020 (exacerbated by recent macro-economic hits to the UK, Hong Kong, and the US).

As illustrated below, Bordeaux has achieved the slowest price growth on the secondary market since May 2014, while Piedmont has seen the most impressive growth – likely due to increasing attention given to the region, and the rarity factor of many of its top wines, from which Burgundy also benefits. 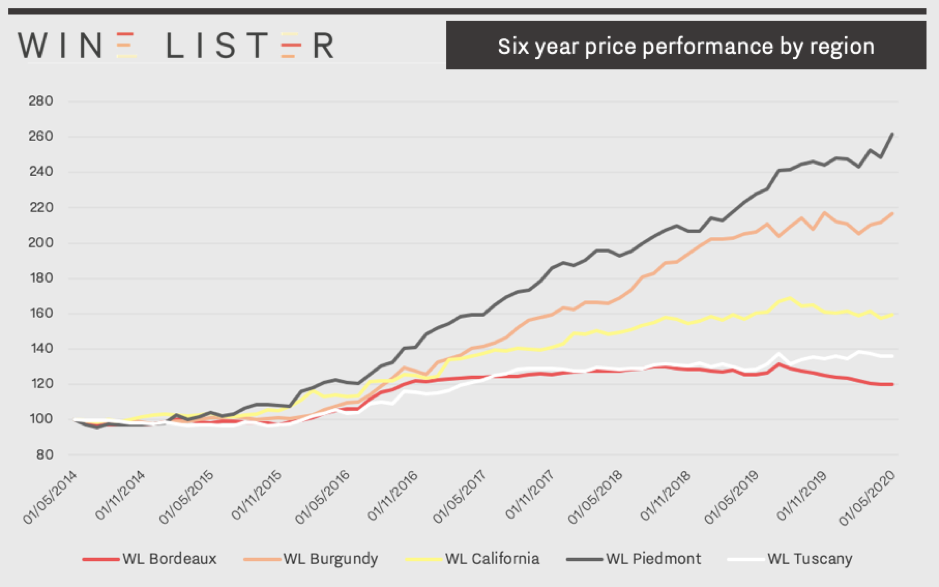 A glance at its price performance since May 2019 tells a similar, if more unnerving story – Bordeaux has floundered over the past year, down nearly 5%.

Despite its price performance difficulties, Bordeaux nonetheless continues its legacy as the most popular wine region by a large margin, based on monthly searches made on Wine-Searcher. 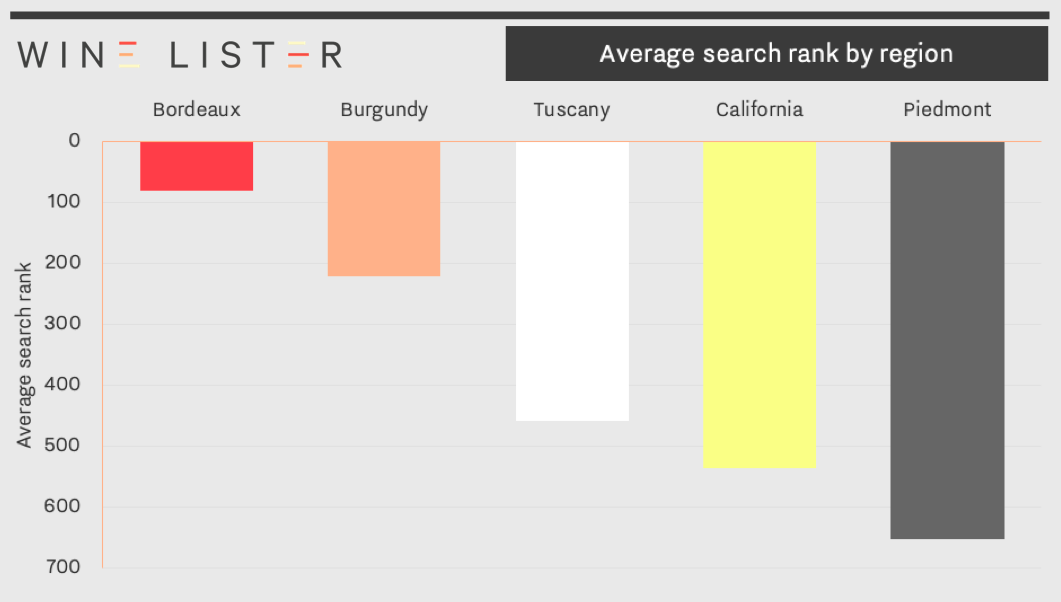 The average search rank of Bordeaux compared to four other key fine wine regions: Burgundy, California, Piedmont, and Tuscany. Results are based on the average searches on Wine-Searcher for the 50 top-scoring wines per region over the last year.

Irrespective of its price performance struggles, Bordeaux remains a focus of fine wine buyers – within the trade and beyond – all over the world.  The en primeur campaign is a wheel that just keeps on turning, even in spite of a global pandemic. Trade and consumers alike can’t help but back Bordeaux, for richer and poorer.

More insight into the success of the 2019 en primeur campaign will be included in Part II of this study. In the meantime, visit the Analysis page to purchase Part I, or download using your Pro subscription (available in both English and French).

Following our recent investigation into white Burgundy at five different price points, we now turn to red Burgundy – which represents a considerable 23% of Wine Lister’s MUST BUY hoard (376 wines).

These wines cover an even greater range of prices than their white counterparts, from £51 (per bottle in-bond) up to £15,352. Read on below for our picks of red Burgundy MUST BUYs at five different price points.

Marquis d’Angerville is widely considered one of the top producers in the Côte de Beaune, and the reference producer in Volnay. Indeed, the domain’s vineyards represent over 10% of all Premier Cru Volnay plantings. D’Angerville’s Volnay Champans is less than half of the cost of its flagship Volnay wine, Clos des Ducs. While both vineyards have south-easterly exposure, Clos des Ducs has calcareous, stony, white marl soil, while the soil in Champans is more clay-driven. The Champans is thus richer and fuller, while the Clos des Ducs (which also enjoys the highest elevation in Volnay) has more complexity and definition. The 2012 Marquis d’Angerville Volnay Champans performs particularly well, achieving a WL Score of 94 – this wine can be purchased from BI Wines & Spirits for £66.67 (per bottle in bond).

Having taken over from his father Jean in 1990, Étienne Grivot (alongside his wife Marielle) has since adjusted his family’s viticultural and vinification methods. While completing his studies in general agriculture, viticulture, and oenology, Étienne noted that the over-fertilised Burgundian soil had become gradually less capable of producing vins de terroir. As well as reducing his overall yields, he now uses organic farming methods and natural yeasts to preserve the expression of where the grapes come from. The 2014 Clos de Vougeot has a WL Score of 94, and was described by Jancis Robinson as having “massively nuanced fruit” – this vintage can be purchased by the bottle from Wilkinson Vintners for £124 (in bond).

Bruno Clair’s Clos Saint-Jacques Premier Cru plantings are situated within a 6.7ha vineyard (shared with Sylvie Esmonin, Louis Jadot, Fourrier, and Armand Rousseau) encircled by a two-metre wall. Providing protection from prevailing winds, this fortification creates a micro-climate, which, alongside its steep south-easterly facing slope, enables consistent ripening. The 2015 vintage achieves a WL Score of 95. Wine Lister partner critic, Neal Martin describes it thus: “a hint of dark chocolate emanates from the oak infusing the red and black fruit toward the finish, and touches of marmalade and blood orange linger on the aftertaste”. This vintage is available to purchase from Cru World Wine, where the price of a bottle starts at £355 (in bond).

Having been elevated to Grand Cru status in 1992, La Grande Rue provides the setting for François Lamarche’s most prized domain – from which only c.5,500 bottles are produced per year. As of the 2007 vintage, François’ daughter, Nicole, has had total control of the winemaking, and has implemented organic viticulture (certified in 2010), which she believes makes vines more resilient to biotic stress. Described by Jancis Robinson as exhibiting “lovely freshness yet concentration and subtlety too”, the 2010 vintage achieves Lamarche La Grande Rue’s highest WL Score since its 1964 vintage (96), and is available to purchase from Corney & Barrow, where prices start at £540 per bottle (in bond).

Jacques-Frédéric Mugnier maintains his aim of preserving the purest expression of nature within his wine, with minimal interference from technological practices in the vineyard or the cellar. His Musigny is widely considered to be one of the greatest Burgundy reds, and has been described by Wine Lister’s Burgundy specialist critic, Jasper Morris as “brilliantly fragrant in bouquet and notably persistent on the finish”. With a WL Score of 96, the 2008 Jacques-Frédéric Mugnier Musigny is more difficult to source than the preceding wines, however, it is worth informing your merchant of your interest in purchasing it.

As shown in a recent post on using Wine Lister to build your portfolio, Burgundy is the best-represented region of Wine Lister’s MUST BUY hoard (33%, or 533 wines). 10% of these (161 wines) are white Burgundies, that show high quality and good value within their respective vintages and appellations. These wines cover a vast range of prices, from £15 (per bottle in-bond) up to £1,354.

This week’s blog post examines white Burgundy MUST BUYs at five different price points, to help the hunt of those buying fine wine at every level. 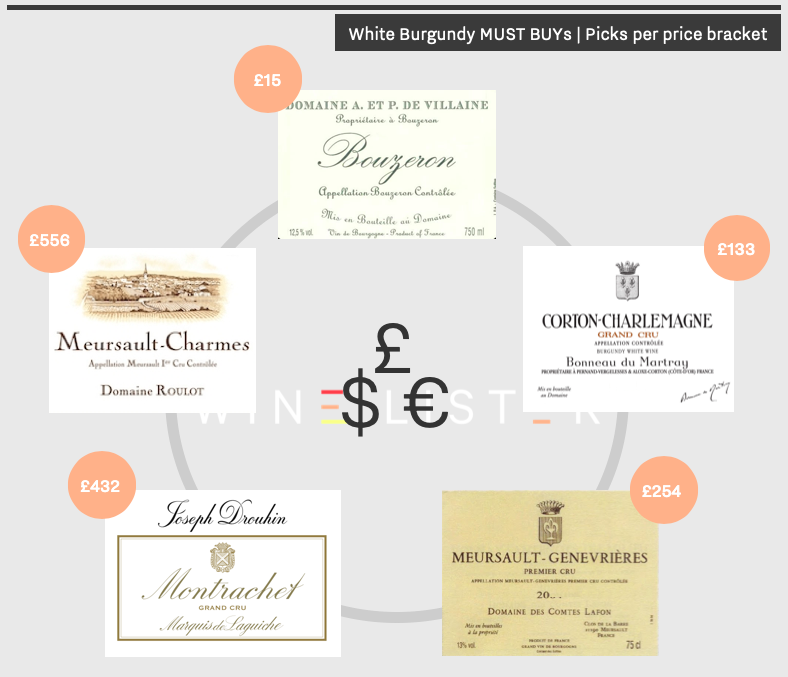 Bouzeron’s location in the north of the Côte Chalonnaise provides the setting for Aubert de Villaine’s personal project – one with a humbler reputation than that of his magnum opus, Domaine de la Romanée-Conti. Dispelling the region’s once-unfavourable reputation, de Villaine’s restricted yields and hand-harvesting produces top quality Aligoté Doré. The 2016 vintage achieves a WL Score of 90, and was described by Neal Martin as having “a touch of salinity towards the finish with judicious hints of stem ginger and a hint of rhubarb”. This wine is available to purchase from Justerini & Brooks, where a case of six starts at £90 (in-bond).

Bonneau du Martray is the largest single owner of vines in Corton-Charlemagne – an appellation that is often said to rival Montrachet. The 2015 vintage was discussed in Wine Lister’s blog on the top 2015 white Burgundies by WL score, in which it was the second highest overall scorer. As of 2018, around 25% of Bonneau du Martray’s Corton-Charlemagne vineyards has been leased to Romanée-Conti – a factor that could drive its price up in the future. For now, this Corton-Charlemagne remains of exceedingly good value in the context of Grand Cru white Burgundy. The 2015 vintage can be purchased from UK merchants such as Goedhuis, where a case of six costs £916 (in-bond).

Despite lacking the Grand Cru status held by Corton-Charlemagne, the higher cost of Domaine des Comtes Lafon’s Meursault Genevrières (Premier Cru) could in part be reflective of the increasing popularity of Meursault. Dominique Lafon is often considered one of the leading producers in Meursault, as reflected in his meticulous vinification process. Spending two winters in wood, and sleeping in some of the deepest and coldest cellars in the region, his wines are bottled nearly two years after harvest – one of the latest bottlings in Burgundy. Achieving a WL score of 94 and ‘Investment Staple’ status, the 2012 vintage is available to purchase from Four Walls Wine Co., where a bottle costs £225 (in-bond).

The second Grand Cru white Burgundy examined here is more expensive than Bonneau du Martray’s Corton-Charlemagne, but nonetheless also good value – this time in the context of Montrachet specifically. Hailing from négociant house Joseph Drouhin, its Montrachet Marquis de Laguiche is priced around £432, while the average price of all Montrachet 2017s on Wine Lister is £1,249. Sourcing grapes from vineyards owned by the Laguiche family, the quality here is just as impressive as several Montrachet wines produced by Burgundy domains. Achieving a WL score of 95, the 2017 vintage was described by Jancis Robinson as “Creamy, deep, powerful and endlessly long”. This wine is available to purchase from Berry Bros. & Rudd, where a case of six bottles starts at £2,750 (in-bond).

The “blowout” wine of this week’s selection is Domaine Roulot’s Meursault Charmes. Having assumed direction of the estate in 1989, Jean-Marc Roulot has been successful in fine-tuning the distinct style of wine developed by his father, Guy Roulot. While many other wines of this village exhibit richness and concentration, the 2015 Meursault Charmes reflects Jean-Marc’s commitment to achieving a brighter style of Meursault – one which expresses its terroir vividly. Speaking on his aversion to excessive lees-stirring, he says, “I prefer to lose a little volume and power on the palate in order to obtain the ‘ligne droite’ [straight line] and the purity. This haunting purity and directness is evident in every wine Roulot produces.” The wine is available from several UK merchants, including Morgan Classic Wines, and Fine+Rare, from which prices start from £425 (per bottle in-bond).