The best bottle for your budget

Considering the best of white Burgundy MUST BUYs across five different price points, these potential picks gain high WL scores and are all approaching or within their drinking window parameters. Wine Lister’s MUST BUY algorithm produces initial recommendations through considering a wine’s quality and value within its vintage and appellation. 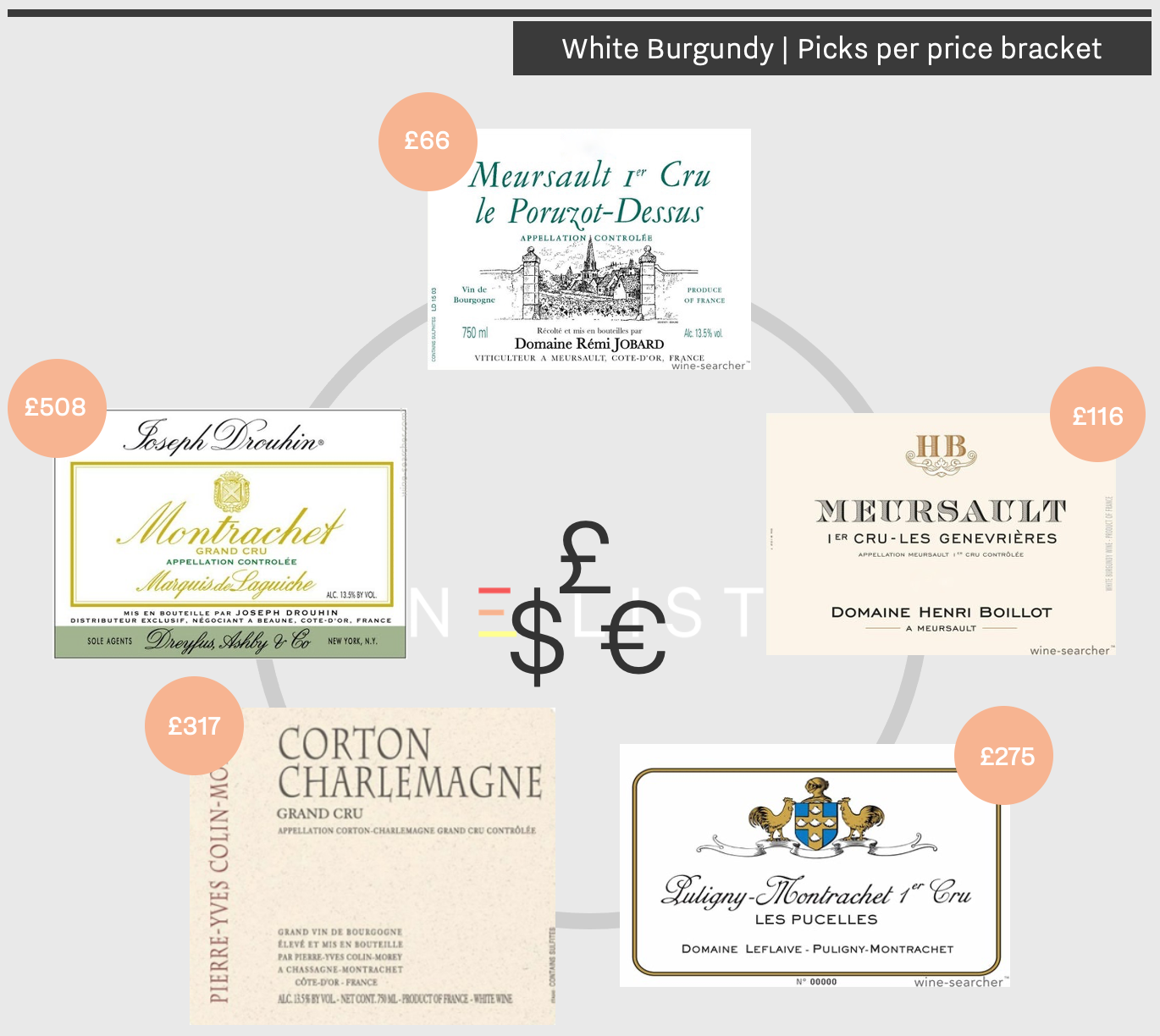 Which are the best white Burgundy wines for my budget?

Notorious for housing wines of high quality with equally high demand, Burgundy has seen some extreme price rises over the last few years. Below we explore top white Burgundies with availability across a range of prices.

For more price bracket picks, read our blog: The best for your buck: Bordeaux 2020 at five different price points

With a history of winemaking in his family dating back to the 15th century, Rémi Jobard took over his namesake estate from his father in 1996, and has since overseen many developments. As well as converting to an organic practice in 2008 (and gaining certification in 2011), Rémi introduced cover crop growth across his seven vineyards to encourage the 60+ year old vines to grow deeper to find nutrients. Harbouring a naturally limited yield through cordon-pruning, Rémi Jobard produced just 2,700 bottles of Meursault Le Ponuzot-Dessus in 2015. Despite this, there is still some available of the vintage for under £100, which can be purchased from Lea & Sandeman at around £66 a bottle.

Since taking over the helm of his family property in 2005, fifth-generation wine maker, Henri Boillot has implemented several changes at Domaine Boillot. As well as a focus on sustainable farming methods, including the avoidance of chemicals, and manual harvesting, the team conducts heavy pruning to limit yields, and harvests fruit as late as possible to ensure maximum phenolic maturity. White grapes are crushed gently to avoid bitterness, and fermented in larger barrels than the typical Burgundy “pièce” (350l, vs. 228) to ensure that purity and freshness is unencumbered. Achieving a WL score of 94, the 2016 vintage can be enjoyed at its best for another 10 years, and is available to buy from Fine+Rare at £116 a bottle.

The Leflaive family legacy has been propelled into a modern era, under the founder’s great-grandson and fourth generation leader, Brice de La Morandière since 2015. As part of increased investment into refining its practice, Leflaive introduced a new type of cork in 2016, from natural cork to DIAM (made from broken down natural cork, cleaned with carbon dioxide), which increases the longevity of its bottles. MUST BUY Puligny-Montrachet Les Pucelles 2014 achieves a WL score of 94, and can be found at Corney & Barrow from £275 a bottle.

The son of Burgundy’s infamous Marc Colin (whose domain expands across 30 different appellations in the region), Pierre-Yves established his own project in 2005 from vineyards he inherited from his father. He deviates from traditional Burgundian vinification methods, utilising larger demi-muid barrels (600l) to moderate the influence of oak on the wine and preserve the purity of fruit. Gaining Buzz Brand and Investment Staple status, Pierre-Yves Colin-Morey Corton-Charlemagne 2018 has WL score of 95, and provides a solid bet for top-quality white Burgundy to lay down for the future. It can be sourced from Berry Bros. & Rudd at £317 a bottle.

Produced by négociant house Joseph Drouhin with grapes sourced from vineyards owned by the Laguiche family of the Montrachet Marquis de Laguiche estate, Joseph Drouhin’s Montrachet Marquis de Laguiche 2013 is a MUST BUY at the premium end of white Burgundy offerings. Founded in 1880 by 22-year-old Joseph Drouhin himself, the legacy of its founder’s production has been carried through generations, with the property now under the helm of his four grandchildren, Fréderique, Véronique, Philippe, and Laurent. Receiving a WL score of 96 at around £508 a bottle, the 2013 has 10 more years left of enjoyment. To get your hands on this vintage, you can place a bid for it on the Berry Bros & Rudd online marketplace, BBX.

To find out more about Burgundy’s latest release, we recommend reading: Burgundy 2019s so far – finding value at the top, and The final word on Burgundy 2019 – Jasper Morris’ top scores

N.B. All prices are quoted per bottle, in-bond and are correct at the time of publication (19th August 2021).

To keep up to date with our fine wine insights, be sure to subscribe to our free newsletter: https://www.wine-lister.com/subscribe/info

What top wines do sommeliers recommend?

Whether offering the perfect food pairing or serving an unforgettable glass, sommeliers are often responsible for creating moments of vinous magic shared by wine lovers far and wide. Our latest blog flips the script, with some of the world’s leading sommeliers sharing with us their most memorable pours, providing the ultimate guide on how to drink like a pro.

Lupo Theones shares the same sentiment as many of his peers: “it is challenging to choose a single wine when you taste so many great wines as a sommelier”. He nonetheless mentions Egon Müller’s Scharzhofberger Riesling Kabinett 2011 as a wine that “deeply impressed” him, having tasted it soon after moving to London to join The Connaught. Describing a “perfectly balanced” palate that “shows a great acidity and minerality”, Lupo notes that it is a wine you can drink on its own, or paired with the likes of sushi and shellfish, as well as Foie Gras.

Having discovered the vintage just last year, Victor Petiot cites Toro Albalá Don PX 1931 as his favourite wine, due to its “uniqueness” after sleeping in barrel for over 90 years. He explains that it provides “the perfect balance between powerful and well-balanced” with a “sweet and creamy texture yet high acidity”. On the topic of pairing, Victor tells us that the wine prompted the creation of a new dish to be served with it, comprising “a pigeon cooked in a coffee dough with salsify, hazelnut, pan-fried foie gras and pigeon sauce with coffee and a bit of Toro Albalá 1931”.

Gareth Ferreira recalls being “immediately hooked” on his first real trip to visit the great producers of Burgundy during his early career. He tells us of the first time he tried Jean-Marie Fourrier’s Gevrey-Chambertin Clos Saint-Jacques, which made him question, “how can wine taste this good?”. It has since remained a wine he “looks forward to opening, no matter what the vintage is”, though the first he tasted – 2009 and 2010 – “will always have a special place in [his] heart” and 2002 is one of his favourites in Burgundy.

“The reason that I became a sommelier is the Nebbiolo grape” exclaims Beatrice Bessi, who fell in love with Barolo in particular over 10 years ago. It is her “never-ending love”, as the region takes a lifetime to know in its entirety (“similar to Burgundy in that respect”, she notes). While citing Bruno Giacosa and Bartolo Mascarello as “traditionalist” producers that she would turn to on special occasions, Beatrice recently “fell in love with the wines of a super modern producer”, Domenico Clerico. In regards to pairing, she tells us that there is “nothing more satisfying” than an amazing glass of Barolo with pizza –  there “doesn’t need to be an occasion to have a great glass”.

Unable to choose a favourite, Paul Lo instead recalls an exclusive dinner he hosted in May 2014, at which the late chef Joël Robuchon’s menu was paired with 10 wines from the Lisboa cellar hailing from the 1959 vintage. Listing Dom Pérignon Oenothèque, Margaux, Palmer, Latour, Haut-Brion, Lafite, Mouton, La Mission Haut-Brion, Cheval Blanc, and a Steinberger Riesling Trockenbeerenauslese, he tells us that “uncorking the wines in a single event was unforgettable”. He gives particular praise to the Steinberger, noting “so many elements inside – nectar coupled with dried nuts, dry fruits, cigar, caramel, noble spices”, presented with “delicate and perfect acidity”.

Stefan Kobald tells us that current favourite wine is Philippe Colin Montagny 2016. Having always known of the producer, Stefan discovered this specific cuvée before the first lockdown and has been “hooked ever since”. He describes its “fresh acidity, stunning aromas of ripe apple, citrus notes of lemon peel, and grapefruit”, with a “hint of butter coming from the light oak usage”. Sharing the same philosophy for when he buys wine for the restaurant and himself, he seeks freshness and drinkability, and a wine that invites you back to take another sip – which this wine “definitely does”.

Narrating her recent encounter with Krug Clos du Mesnil Blanc de Blancs 2002, Victoria O’Bryan tells us that it made her “weak at the knees”. She explains that the wine opened up with surprising ferocity, “like a jolt of electricity giving power and lift to bright citrus tones and a stunning limestone minerality”, with an expression that was “at once creamy and piercing with layers of intensity”. When pairing a wine with “this flair of tension and drama”, Victoria would recommend pouring it alongside caviar or oysters.

“Every wine aficionado would understand the emotion I felt when I first tried this unique wine”, notes Julien Sarrasin, referring the Rhône’s renowned Reynaud family, and specifically a 2004 Rayas Châteauneuf-du-Pape. Now under the influence of the “Rayas effect”, Julien also cites a rosé called Parisy from another Reynaud property, Château des Tours – a blend of Grenache and Cinsault that provided his “most exciting experience” of rosé wine. He describes its “intense bouquet of crushed wild ripe raspberries, jammy strawberries, liquorice stick, and Mediterranean herbs”, which pairs with “intense seafood and fish dishes, as well as meat”.

Echoing Lupo Theones’s choice, Jonathan Charnay tells us that his “absolute favourite wine” is Egon Müller’s Scharzhofberger Riesling, though cites the Auslese as his top wine.  He muses on its “great complexity and depth” with “intense aromas of white flowers and honey” that he immediately fell in love with when tasting with Egon Müller during a visit to the winery in 2013. While it is sweet when young, Jonathan points out that it can “age for decades, turning into a delicate elixir” with notes of “apricots, ginger and bergamot”.

Pascaline Lepeltier informs us that if she “had to go back to a wine over and over again” it would be Benoit Courault’s Gilbourg – a Chenin Blanc from Anjou in the Loire, where she grew up. “Benoit was one of the first vignerons I met over 15 years ago” she explains, noting that her path was paved by time spent with him in his vineyards in the Coteaux du Layon. Produced with grapes from different plots on schists, Gilbourg is made organically and with minimal intervention – “a real paragon” according to Pascaline. Admiring its “tremendous” ageing potential, she notes its evolution into “the most complete, complex, powerful but ethereal Chenin”.

Explore Wine Lister’s own MUST BUYs for 2021 in our recent blog here.