Earlier this week, we explored Wine Lister’s top red Value Picks (wines with the best quality-to-price ratios of all those in the Wine Lister database), noting that Tuscany and Bordeaux are the two best regions for value overall.

Having seen a noticeable lack of red Value Picks in Burgundy, the region’s white wines perform much better for quality-to-price ratio. The chart below shows the top eight regions for white Value Picks, and their average price per region. 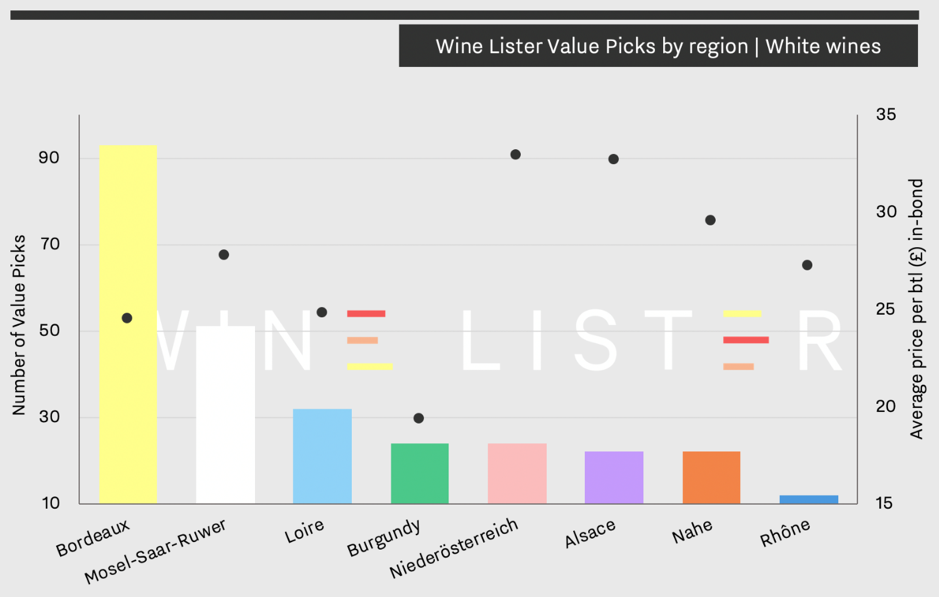 Of the 280 white Value Picks shown above, Bordeaux and the Mosel are heavily represented, in most part due to the impressive quality-to-price ratio of their sweet (or semi-dry) wines. Indeed, whites from Sauternes and Barsac make up all but one of the Bordeaux white Value Picks. While not the “most popular” these are some of the oldest Value Picks on Wine Lister, and include examples such as 1995 Clos Haut-Peyraguey, and 1996 Nairac.

The Loire provides a mix of different sweetness levels, however those achieving the highest quality are also sweet (such as 2006 Domaine Huet Clos du Bourg Moelleux).

Treading into Riesling-land, the Mosel and Nahe offer up the likes of Joh. Jos Prüm’s Wehlener Sonnenuhr Riesling Auslese Goldkapsel, and Dönnhoff’s Oberhäuser Brucke Riesling Auslese Goldkapsel. Alsace and Austria’s Niederösterreich produce some gems too (from the likes of Zind-Humbrecht and F.X. Pichler respectively), though of all white Value Picks these two regions are the most expensive on average.

With Burgundy 2018 en primeur in full swing, soaring prices for some of Burgundy’s best can add to the January blues. While Burgundy prices tend to rise more quickly after release than any other region (making the en primeur buying system therefore extremely worthwhile), other regions provide better sources of good value wines for drinking, rather than cellaring for future consumption. To wave goodbye to any remaining blues as January come to a close, Wine Lister therefore looks this week at Value Picks from across fine wine regions.

Wine Lister’s Value Pick algorithm simply flags wines with the best quality-to-price ratios of all the wines in our database. A coefficient is applied to allow exceptional quality to be recognised, even for higher-priced wines.

The chart below shows the top nine regions for red Value Picks, and their average price per region. 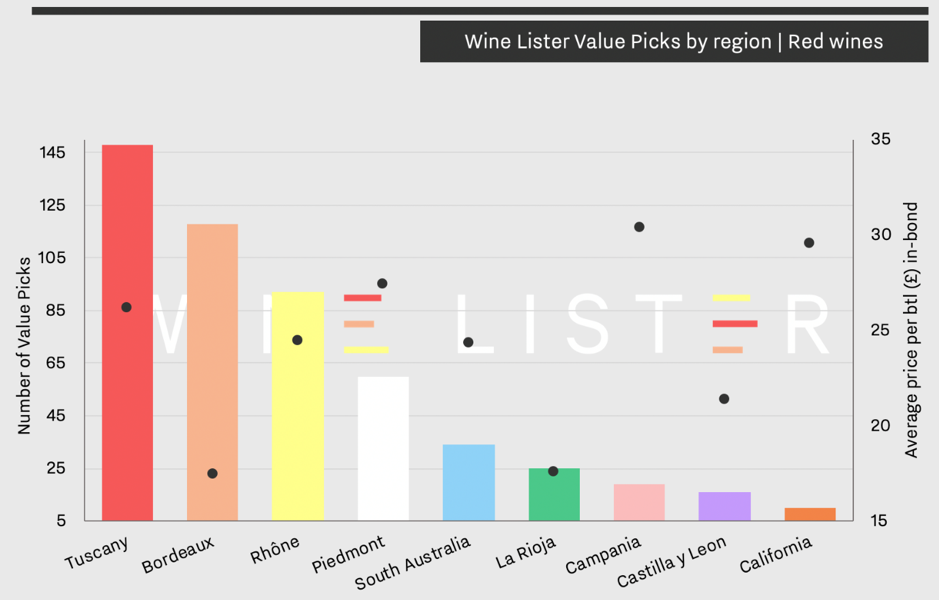 Piedmont does not go wanting for Value Picks, with a wide range of suggestions, from Domenico Clerico’s Barolo Ciabot Mentin to Vietti’s Langhe Nebbiolo Perbacco.

France also does well for Value Picks, with 210 reds entries between Bordeaux and the Rhône. The former region has the lowest average price of all Value Pick regions shown above (£17.47 per bottle in-bond – when buying a full case), and includes Crus Classés from across appellations such as Malartic-Lagravière Rouge and Grand Mayne, as well as some second wines of Grands Crus châteaux (e.g. Pichon Comtesse’s Réserve de la Comtesse, and La Dame de Montrose).

The Rhône is home to 93 Value Picks from both north and south, and provides a list particularly strong in back vintages. Entries include Ferraton’s Hermitage Les Dionnières 2004, and Clusel Roch’s Côte Rôtie 2009.

The new world is well-represented by Value Picks from Australia across the McLaren Vale and Barossa Valley. California also makes an appearance, although perhaps expectedly, its 10 Value Picks earn the highest average price of any region shown in the chart above.

After discovering some 500 wines over eight tastings during Burgundy week last week, we are excited to publish our first round of Burgundy 2018 MUST BUYs.

Not all Burgundy 2018s are yet priced in the market, so this list has the potential to grow over the coming weeks – watch this space.

A neat 18 wines have so far made it through the MUST BUY algorithm, passing the artificial and human intelligence tests. That means that according to the critic and price data, they offer high quality and good value in the context of the Burgundy 2018 vintage, and that the global fine wine trade and / or the Wine Lister team deems it worthy of note. Given Burgundy’s general trend for rising prices post-release – these Burgundy 2018s should be snapped up now.

Hailing from across the Côte d’Or, this week’s MUST BUY selection confirms that no one appellation stands out in 2018, as outlined by our founder, Ella Lister, in her short vintage report published earlier in the week. 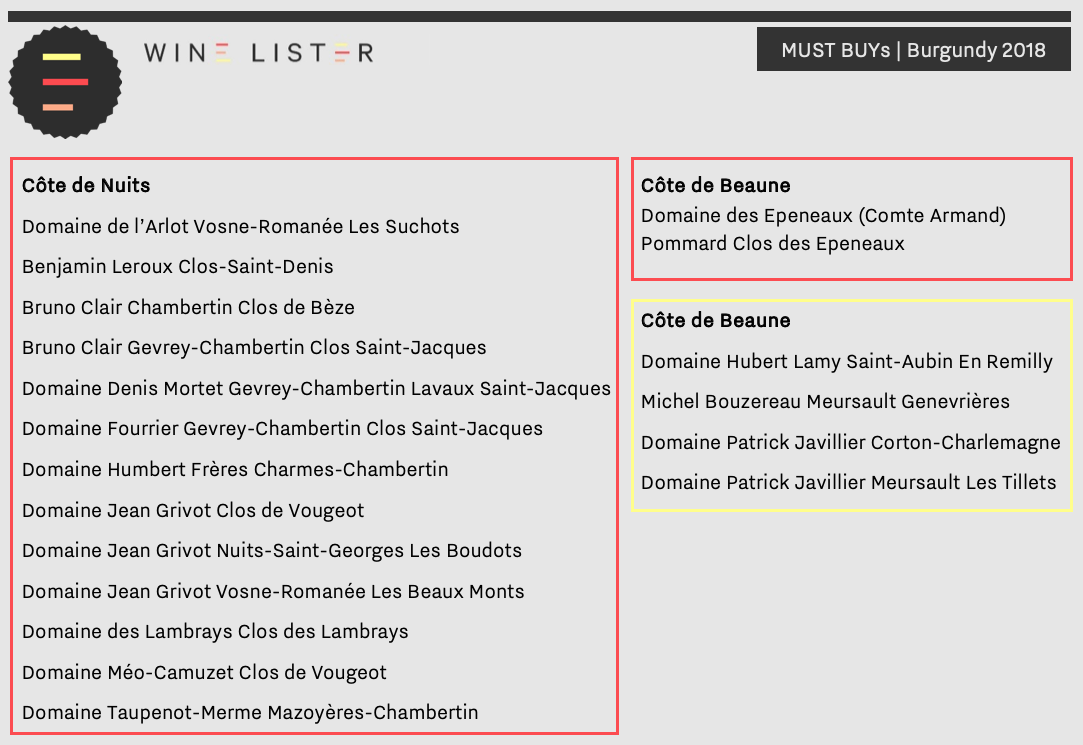 From the Côte de Beaune, Comte Armand’s Clos des Epeneaux is the only red to meet all the MUST BUY selection criteria. Of the four whites, the unfailingly consistent Saint-Aubin En Remilly from Hubert Lamy makes the cut, alongside a Meursault Genevrières from Michel Bouzereau, and two wines from Patrick Javillier – Corton-Charlemagne and  Value Pick Meursault Les Tillets.

Readers note that this week marks the first MUST BUY update including scores from our new regional partner critic, Jasper Morris.

Eager to get a full picture of the 2018 vintage, the Wine Lister team immersed itself in London’s Burgundy week last week, attending eight tastings between us. Having been spoilt by a handful of tastings in the cellars of top domaines in July and December 2019, we braced ourselves for a reality check in the light of the challenging growing season.

Burgundy was baking hot in the summer of 2018, with the highest amount of sunlight for half a century, according to Olivier Lamy of Domaine Hubert Lamy. Making great wine in this vintage was all about the producers’ choices, and great wines there are, but not across the board. Key decisions included production volumes (not too high, or too low!), picking dates (early, or at least not too late), and canopy management (or rather lack thereof, letting the leaves protect the grapes from too much sunlight).

The 2018 vintage has been touted as one of quality and quantity. White wine volumes were indeed high, and this arguably helped avoid over-ripeness (though too much volume risked dilute flavours). However, red quantities are not always more generous than average in 2018, with many producers managing yields with green harvesting. As for picking dates, August start dates were more commonplace than ever before. Picking in time was crucial – throughout our tastings, the Wine Lister team found that occasional wines showed signs of fruit left hanging a day or two too long. However, no blanket rule applies, and producers such as Grivot, who waited until mid-September, made some of the finest wines of the vintage.

It was clear early on that a hot summer was potentially in store, so arguably an easy call to leave a sufficient amount of foliage to protect the grapes from the relentless sun. More producers are following in the footsteps of Lalou Bize-Leroy and forgoing trimming altogether. For example, Charles Lachaux of Arnoux-Lachaux has been experimenting with making arches of his vines, which necessarily creates more shade. 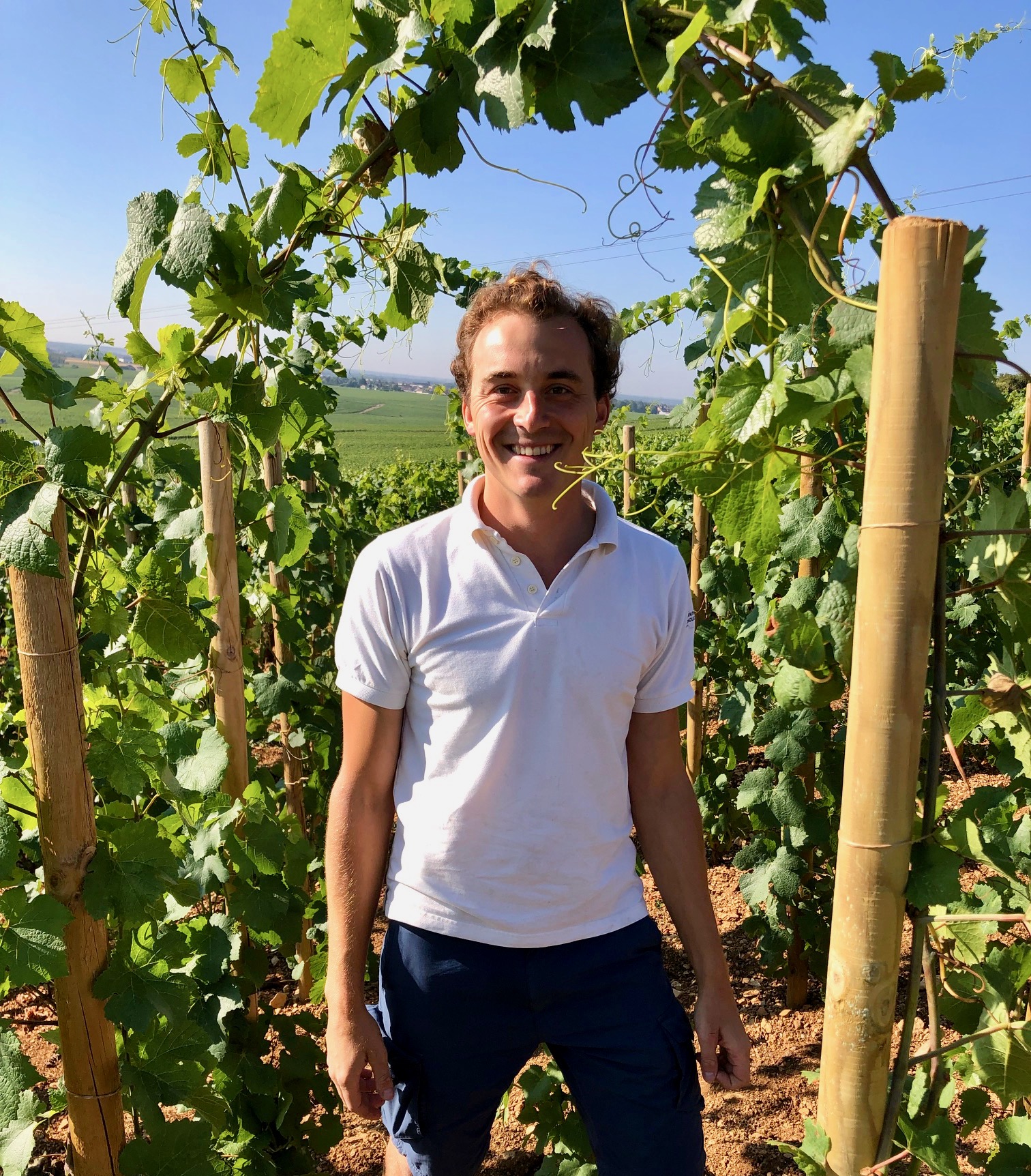 Pictured: Charles Lachaux says when building his vines into arches, “there’s only one rule: there are no rules”.

In some cases the sunshine overwhelmed, but in many more, savvy producers – used to making wine in the context of global warming by now – managed the conditions deftly. Romain Taupenot of Domaine Taupenot-Merme has observed that even the soils have learned to adapt to warmer conditions over time, regaining acidity more quickly than in hot vintages of the past, such as 2003.

The 2018 Burgundy vintage is heterogenous, but we were surprised by how few wines were negatively marked by the extreme conditions of the vintage. The majority of wines manage to harness good acidity and lightness of touch, if not the intense freshness and succulence of 2017. However, the words “limpid”, “bright”, and “lifted” appear far more often in my tasting notes than “rich”, “ripe”, or “heavy”. 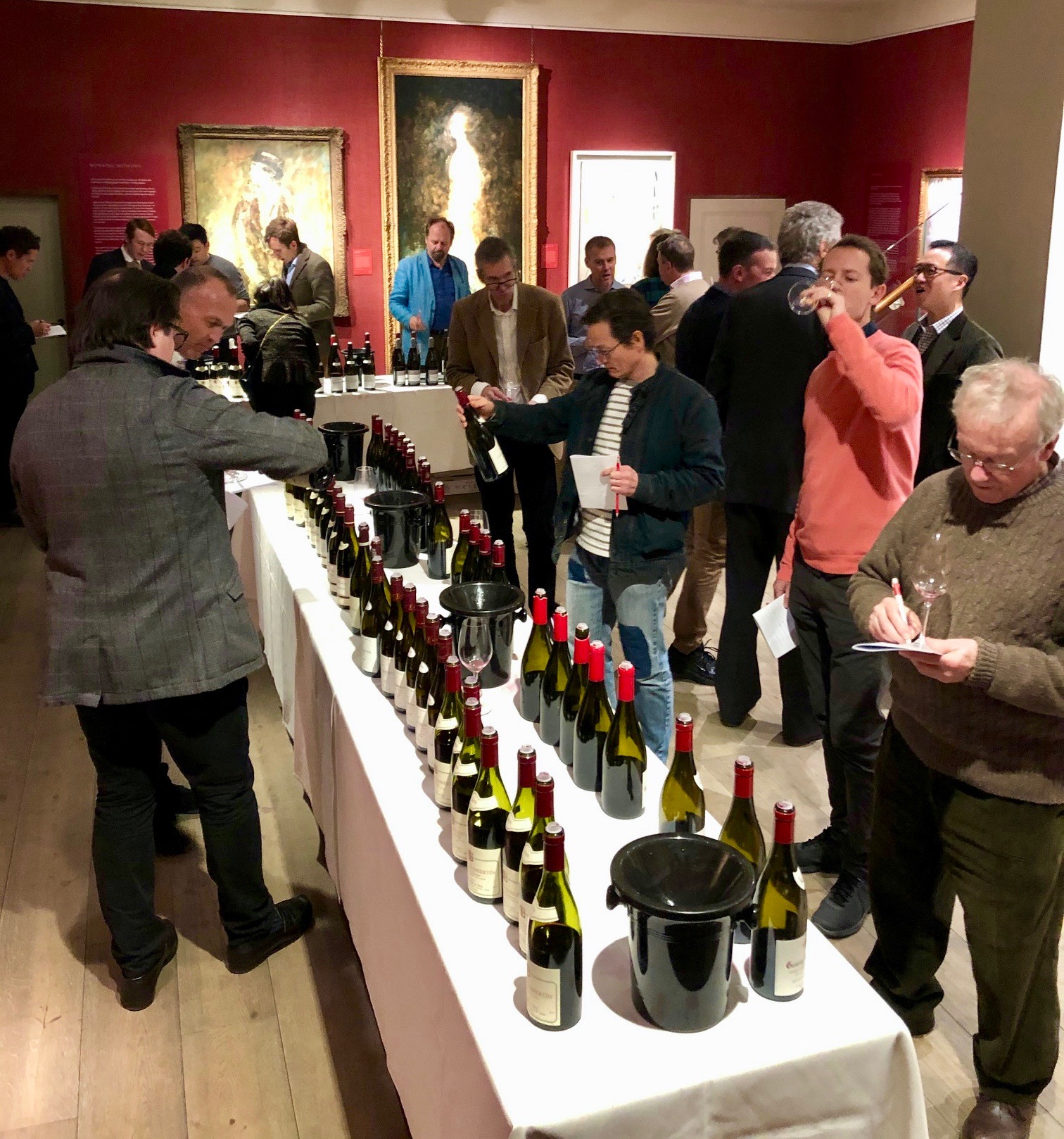 Kicking off Burgundy week tastings with Goedhuis at the Philip Mould Gallery, featuring producers such as Tortochot, Domaine de l’Arlot, Benjamin Leroux, and Jean-Marc & Thomas Bouley to name but a few.

If pushed to choose, this is a red vintage, with higher heights than for whites, which are more consistent but less often exciting, though absolutely not to be ignored. The best reds have harnessed all the energy, vibrancy and texture of the long, hot summer, without being overly sweet or jammy.

After tasting hundreds of wines last week, there are no obvious standout appellations, but rather standout producers. That does not mean that appellations did not stand out – many producers were able to translate terroir impressively given the strong imprint the vintage tried to leave. The wines of Bruno Clair for example, let the different vineyards sing, with a Chambolle “de chez Chambolle” and a very “Vosne” Vosne-Romanée Les Champs Perdrix.

Watch this space for our recommendations, coming soon.

MUST BUYs for a new decade

As we enter into this new year, 2020, it hardly seems possible that wines from the 2010 vintage are now a decade old. Having updated the Wine Lister MUST BUYs for the first time in 2020, we have examined all current recommendations from 2010. Wine Lister’s ground-breaking buy recommendations are data-driven, with an intelligence-based overlay. The algorithm takes into account a wine’s quality and value within its vintage and appellation, as well as the latest industry intelligence from key players in the global fine wine trade. The Wine Lister team then scours the results to identify must-buy wines based on our own tasting experience and market knowledge.

As is becoming a regular pattern for MUST BUYs – thanks to the region’s value proposition – Tuscany dominates the list of reds, with nine wines featured from the 2010 vintage earning 96+ WL across the Chianti and Brunello DOCG, and Tuscany IGT appellations. Super-value producer Le Macchiole achieves MUST BUY status for two of its three cuvées in the 2010 vintage (Scrio and Paleo Rosso), while at the other end of the price spectrum is Masseto 2010. 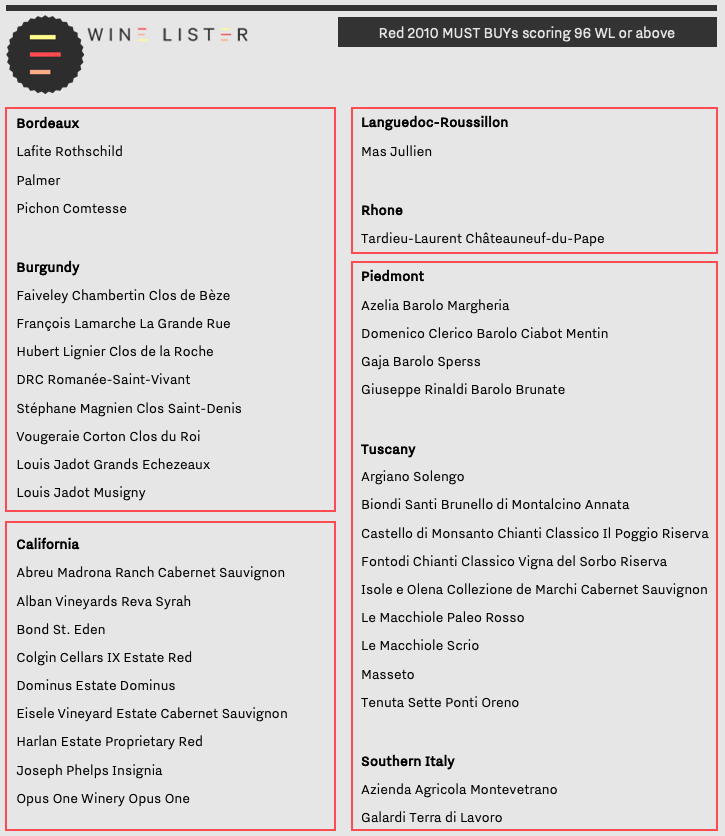 California also achieves nine MUST BUY entries for 2010, including wines from the likes of Dominus, Colgin, Harlan Estate and Opus One. Burgundy follows with one red fewer, and includes François Lamarche’s monopole La Grande Rue.

Piedmont features four Barolos, amongst which is the legendary Giuseppe Rinaldi’s Barolo Brunate (labelled Brunate-Le Coste prior to the 2010 vintage). Bordeaux falls short of its usual ratio of MUST BUYs in 2010, featuring just three wines. Being such an iconic vintage, 2010 Bordeaux in general does not offer the “good value” necessary to make the Wine Lister MUST BUY cut when up against better-value vintages such as 2008 or 2014. However, for Lafite, Palmer, and Pichon Comtesse, the 2010 vintage is of significantly higher quality than other vintages to make it worth paying the price premium – less marked than for many other 2010s. For example, the average premium of 2010 over 2011 for Lafite, Palmer, and Pichon Comtesse is 42%, whereas for Mouton, Léoville Las Cases, and Pichon Baron you have to pay 60% more to get your hands on the better vintage.

Several whites make the cut in 2010, of which the majority hail from the reigning region of Chardonnay. Burgundy’s Maison Louis Jadot sweeps three of the seven white Burgundy 2010 spots, proving once again the excellent value presented by some of Burgundy’s top quality négociants.

Riesling-based whites also prove a popular option, with entries across Alsace and Germany, however lucky owners of some of these (namely Marcel Deiss’ Altenberg de Bergheim and Zilliken’s Saarburger Raucsch Riesling Auslese), should have patience, and could perhaps even wait until the start of the next decade before opening either of these spectacular wines.