For the last three consecutive updates, Burgundy has worn the crown for highest number of new MUST BUY entries. This week it shares its prime position with Tuscany, as the two regions hold six wines each of the 27 new MUST BUYs. Whilst previous updates have been geographically diverse, this week’s countries of focus are France and Italy only.

All but one of this week’s new Tuscan MUST BUYs can be considered “Super Tuscans”. Buzz Brands Querciabella and Sassicaia make the cut for their 2015 and 2007 respectively. Producer Fattoria La Massa earns another place this week for Giorgio Primo, making its 2016 the sixth MUST BUY vintage of this same wine. 2015 Percarlo from San Giusto a Rentennano and 2016 l’Apparita from Castello di Ama complete the new “Super Tuscans”. A second offering from Castello di Ama is this week’s only new Chianti Classico entry, and brings the producer’s MUST BUY total to eight, equalling Italy’s other top MUST BUY producers, Castello dei Rampolla, and Isole e Olena, in number. 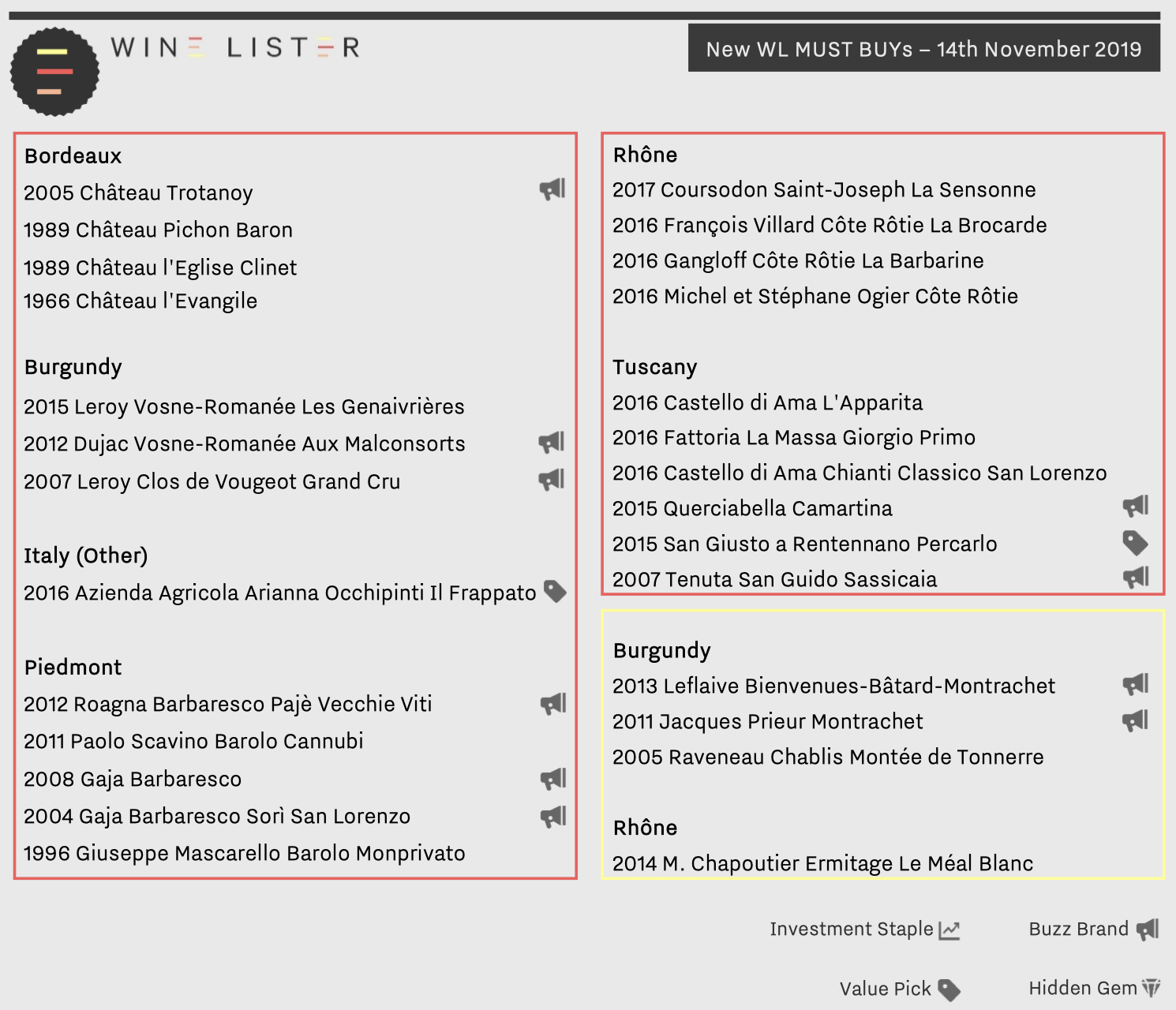 Further North in Italy, Piedmont is by no means overlooked, with Roagna and Paolo Scavino featuring on the new MUST BUY list for Barolo this week (in 2012 and 2011 vintages respectively), alongside Giuseppe Mascarello’s 1996 Barolo Monprivato. Gaja is represented twice, and completes the Piedmont five with the straight Barbaresco and the Sorì San Lorenzo.

Outside Burgundy, France is also well-represented by the Rhône, with a 2017 from Coursodon, together with 2016s from François Villard, Gangloff, and Michel et Stéphane Ogier. Chapoutier’s 2014 Ermitage Le Méal Blanc completes the latest additions of MUST BUY whites. Older vintages of Bordeaux also make the cut, including a 1966 from l’Evangile, and one 1989 from each bank – l’Eglise Clinet and Pichon Baron.

To help keep track of the weekly updates, check out our latest tool on the search page to help you browse only the newest additions to the full MUST BUY list.

This week’s MUST BUY update renders two and a half times as many results as the previous week. For the third consecutive time, Burgundy dominates, with 19 out of the 77 first MUST BUYs of November. To help you browse through all MUST BUYs (currently totalling 1,739 wines), you can now use the MUST BUY browsing blocks from our free user homepage and/or search page.

Six of the most recent Burgundian additions hail from the latest available vintage – 2017. The likes of Vincent Dauvissat, Olivier Leflaive, and Remi Jobard make the cut for whites, while red 2017s are represented by two cuvées from Domaine de l’Arlot (Vosne Romanée Suchots and Romanée-Saint-Vivant), and Nicolas Rossignol’s Pommard.

Meursault dominates white vintages with a bit more age, from Roulot, Pierre-Yves Colin Morey, and the iconic Arnaud Ente. Other red Burgundy back vintages between 1990 and 2015 range from DRC’s Romanée-Saint-Vivant, to Bruno Clair’s Gevrey-Chambertin Clos Saint-Jacques. 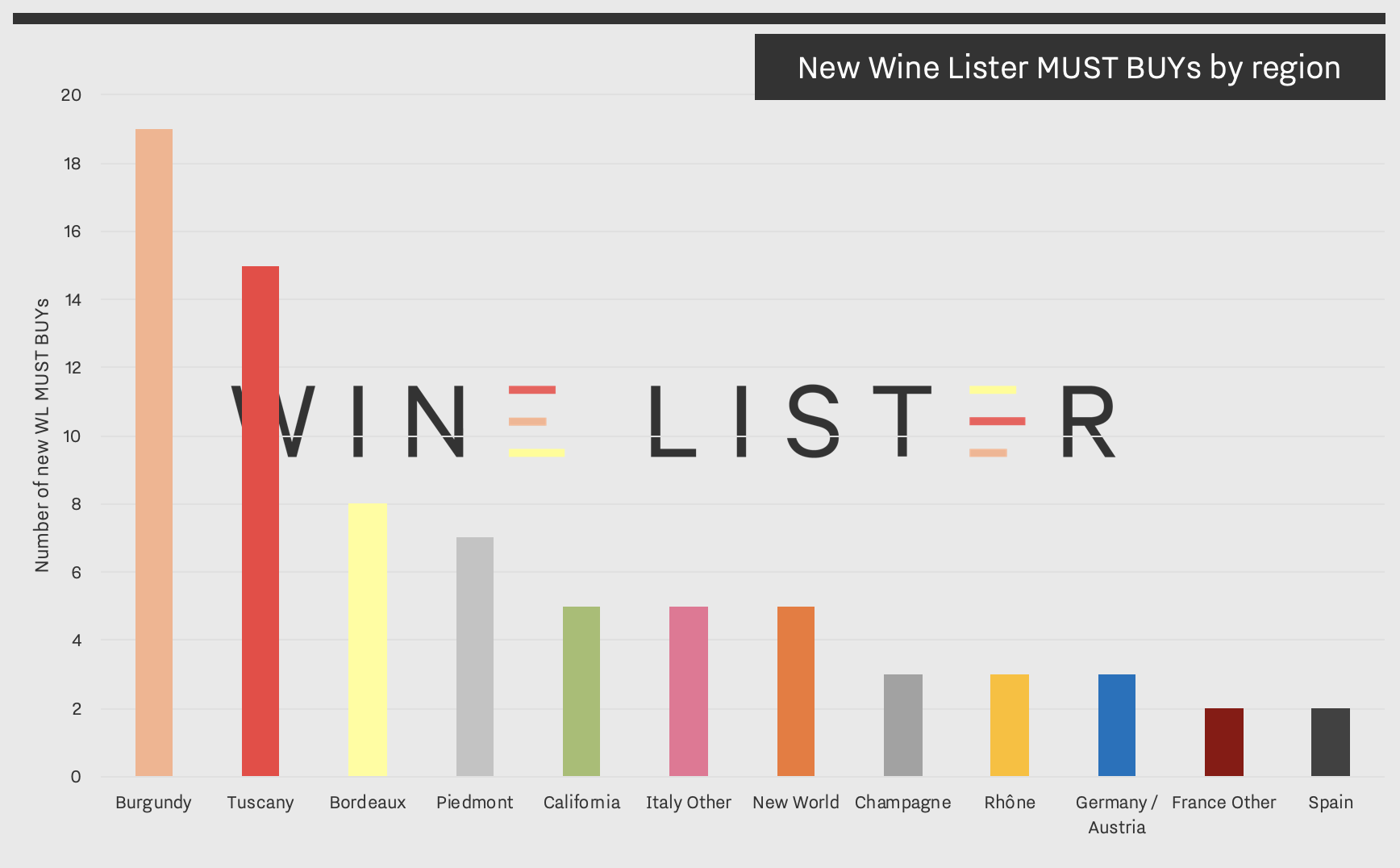 Italy too makes a strong showing this week. 11 of the new Italian MUST BUYs are “Super Tuscans”, amongst which two vintages of Tua Rita’s Syrah qualify (2016 and 2012), as well as 2011s from Masseto and Querciabella Camartina. Also appearing are two back vintage Chianti Classico crus, from Castello di Ama and Fontodi. Piedmont and regions further afield in Italy are by no means neglected, with 12 new MUST BUYs between them.

Wine Lister MUST BUYs must pass not only the algorithm itself, but also the Wine Lister team’s seal of approval. Following recent trips and tastings by different Wine Lister team members, we were especially excited to select wines from Vajra (the Barolo Bricco delle Viole 2015), as well as Gaja, Domenico Clerico, Argiolas, Galardi, and Elisabetta Foradori, as well as three Champagnes – A.R. Lenoble’s Blanc de Blancs, Agrapart’s L’Avizoise, and Béreche’s Le Cran, and finally a stunning dry riesling from A. Christmann.

Alternatively, you can search and browse through the full MUST BUY list here.