“Buzz Brands” is one of the four Wine Lister Indicators developed to help our users identify wines for different scenarios. A Buzz Brand is a wine with strong distribution in the world’s top restaurants, enjoying high levels of online search frequency or demonstrating a recent growth in popularity, and identified by the fine wine trade as trending or especially prestigious. As such, you wouldn’t expect them to come cheap, and the five most expensive dry whites definitely don’t, costing around £2,000 on average. 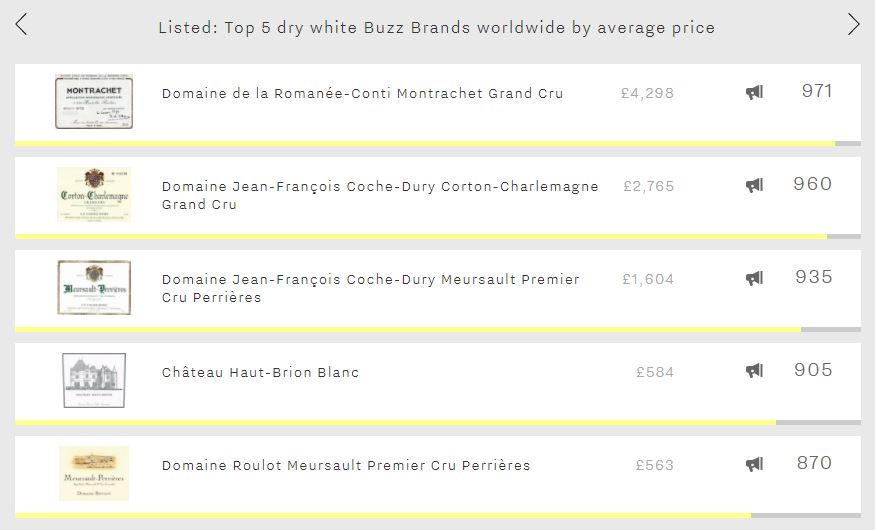 Perhaps unsurprisingly given the miniscule production of its top wines, Burgundy fills four of the five spots (and two of these are from Coche-Dury). DRC Montrachet is the world’s second-most expensive dry white – behind Leflaive’s Montrachet which fails to achieve Buzz Brand status. It achieves the best Quality score of this week’s top five (976), just pipping Coche-Dury’s Corton-Charlemagne to the post (971). It also enjoys the highest Brand score of the group – or any dry white for that matter (960) – the result of appearing in considerably more of the word’s top restaurants than Coche-Dury’s Corton-Charlemagne, which comes second in that criterion (26% vs 19%), and also being nearly 50% more popular than any of the rest of the five.

Whilst Coche-Dury’s Corton-Charlemagne has to settle for second place in the Quality and Brand categories, it not only manages the group’s top Economics score (991), but also the highest of any dry white on Wine Lister. This is thanks to formidable price growth. It has recorded a three-year compound annual growth rate (CAGR) of 25%, and has added 14% to its price over the last six months alone.

It is to be expected that wines from two of Burgundy’s most hallowed grand cru vineyards command the group’s highest prices, but it might come as more of a surprise that two Meursaults from the premier cru Perrières vineyard feature. With over £1,000 separating the considerably more expensive offering from Coche-Dury and Roulot’s expression, it becomes clear that Brand score is a significant driver of price at this rarefied end of the scale, particularly within Burgundy. 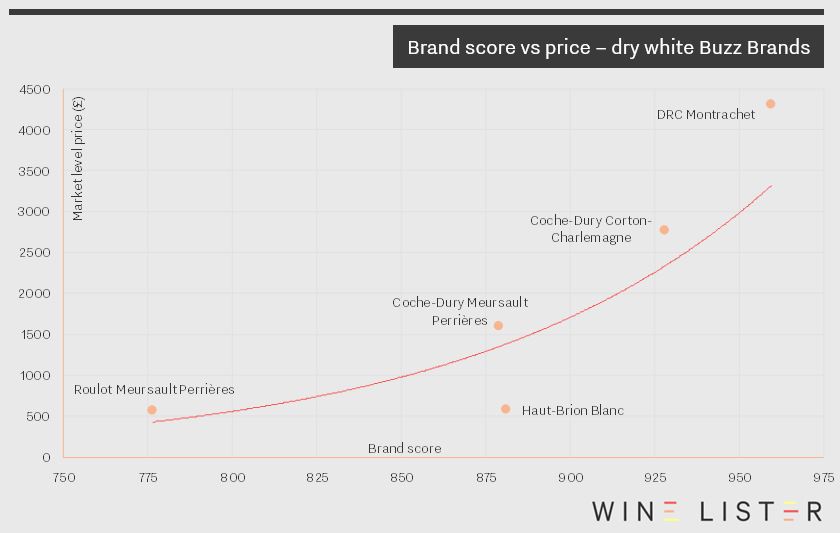 Proving that expensive Buzz Brands are not only to be found in Burgundy, Haut-Brion Blanc makes an appearance in the top five. Whilst it is the most liquid of the group – its top five traded vintages have traded 49% more bottles than any other wine in the five – it has experienced by far the lowest growth rates, with a three-year CAGR of 9% compared to the Burgundy quartet’s remarkable average of 22%.

As Bordeaux en primeur 2017 tastings come to a close, we look back at Brane-Cantenac 2005, one of many highlights in our recent Founding Members’ tasting. 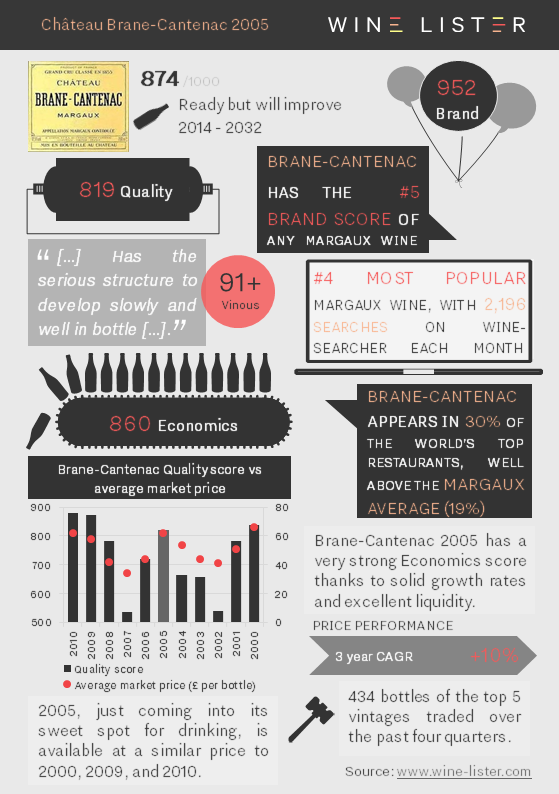 All the facts on Seña 2010, another Hidden Gem included in our Founding Member’s tasting last Tuesday.

You can download the slide here: Wine Lister Factsheet Seña 2010 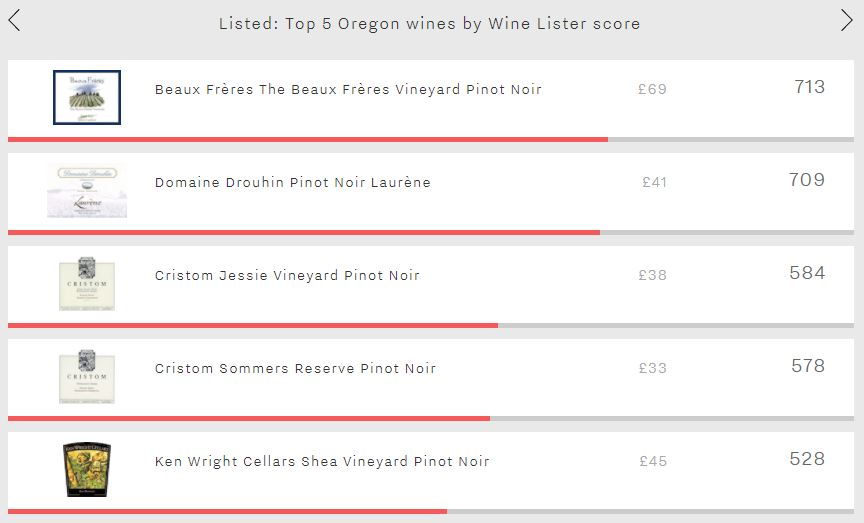 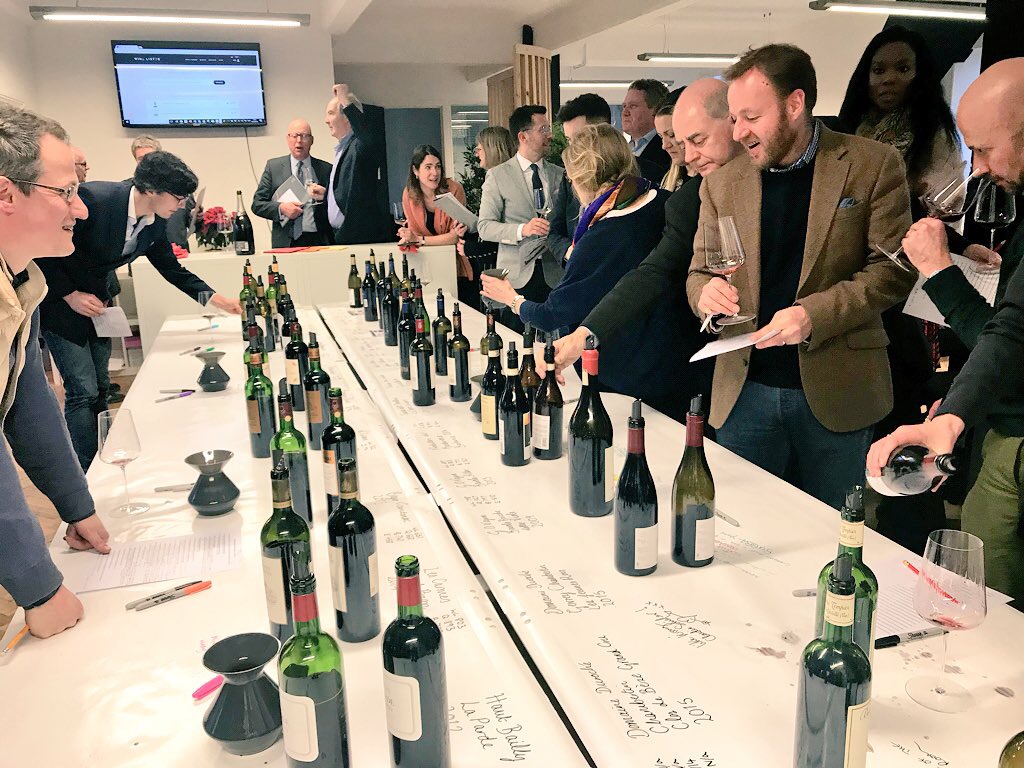 On Tuesday Wine Lister held a tasting of Hidden Gem wines, as identified by our Founding Members from the wine trade. All the wines showed beautifully, including Guigal’s Condrieu La Doriane 2016. Below we summarise all the facts. 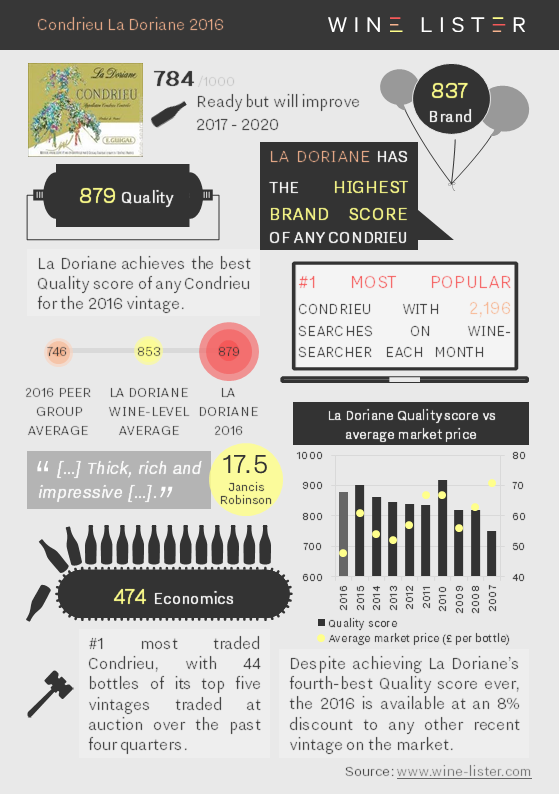 With its top ten wines by Quality score costing £225 per bottle on average, Piedmont might seem overindulgent for a low key midweek meal. However, with a little bit of help in the shape of Wine Lister’s Value Pick search tool, it is easy to find wines that will deliver maximum enjoyment at reasonable prices. Value Picks represent the very best quality-to-price ratio wines, with a higher coefficient applied to allow exceptional quality to be recognised. With a remarkable average Quality score of 976, and costing £40 on average, these five Piedmontese wines prove that outstanding quality is available at all price points. 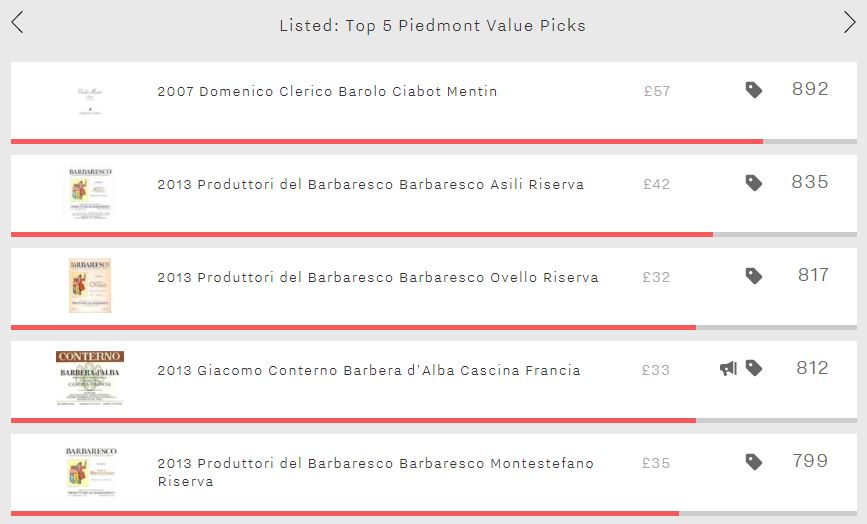 If you’re after top Nebbiolo at a fair price, then Produttori del Barbaresco’s 2013s appear a safe bet, filling three spots. However, the trade-off for top value will be patience – none of the three will enter its drinking window until 2023. However, with each of them lasting over 18 years, you will be able to make the most of your prudent purchases for years to come. And what better way to explore Barbaresco’s crus in an outstanding vintage than with these three? The Asili Riserva achieves the top Quality score of the three (987), 75 points above its wine-level average. It is also the most expensive, but £42 per bottle doesn’t seem unreasonable for such quality. The Montestefano Riserva really outperformed in the 2013 vintage with a Quality score of 972, 125 points above its average score. The market is yet to react – the 2013’s price is currently 16% below its wine-level average.

Proving that if you’re looking for value for money in Piedmont, it’s not just Barbaresco that you should look out for, Domenico Clerico Barolo Ciabot Mentin 2007 is the region’s number one Value Pick. With a Quality score of 989 – thanks to a 98 point score from Antonio Galloni – it is not hard to see why. What’s more, whereas the Produttori del Barbaresco 2013s require cellaring, the Ciabot Mentin is just entering its drinking window.

Showing that Piedmont is not all about Nebbiolo, Giacomo Conterno’s Barbera d’Alba Cascina Francia 2013 fills the remaining spot. The group’s only Buzz Brand, this would be an excellent way to sample one of Giacomo Conterno’s wines at a fraction of the cost of the domaine’s top cuvées – the hallowed Monfortino Riserva costs £608 per bottle on average.

Prices per bottle are provided by our price partner, Wine Owners, whose own proprietary algorithms process millions of rows of incoming price data from Wine-Searcher to calculate a more realistic market level price – the price at which a wine is likely to find a ready buyer – based on market supply and spread models. As lower retail prices are likely to sell first, the prices you see on Wine Lister may be below the Wine-Searcher average in some instances.