Earlier this month Wine Lister published its annual Bordeaux Market Study, and in recent weeks we’ve published a few nuggets from the 48-page long study on this blog (such as the top-scoring Bordeaux crus, and how to arrive at a 2016 release price). Today, we’re going to explore the popularity of Bordeaux’s individual appellations by looking at the online search frequency from our data partner Wine-Searcher for the six most popular wines of each. 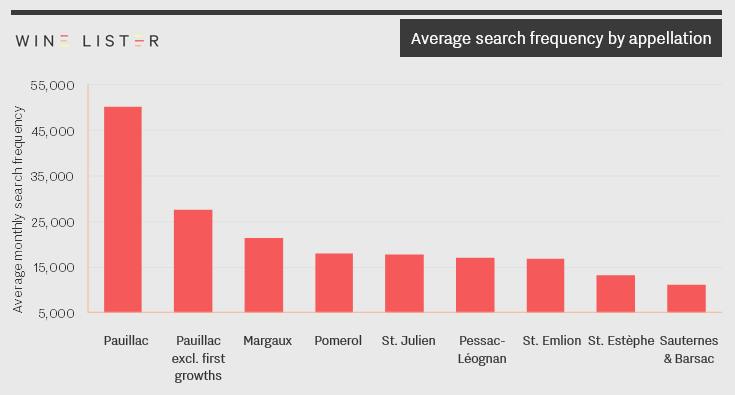 Unsurprisingly, Pauillac – home to three of the five first growths – leads the way, with well over double the number of searches as nearest rival Margaux. If we exclude Châteaux Lafite, Mouton and Latour, the Pauillac average is just under 27,500 searches per month, still 29% ahead of Margaux.

Pomerol comes third, defying low production levels to achieve more average searches for its top wines than Saint-Julien. Pessac-Léognan benefits from the inclusion of Haut-Brion to help it edge ahead of Saint-Emilion, in spite of the latter’s four premiers grands crus classés A, while Saint-Estèphe and Sauternes & Barsac bring up the rear.

This is just a taster of the 2017 Bordeaux Market Study. You can download the full 48-page report from the Wine Lister Analysis page (subscribers only).

Bordeaux en primeur analysis on Calon Ségur 2016, which has been released this morning with a UK RRP of £63.75: 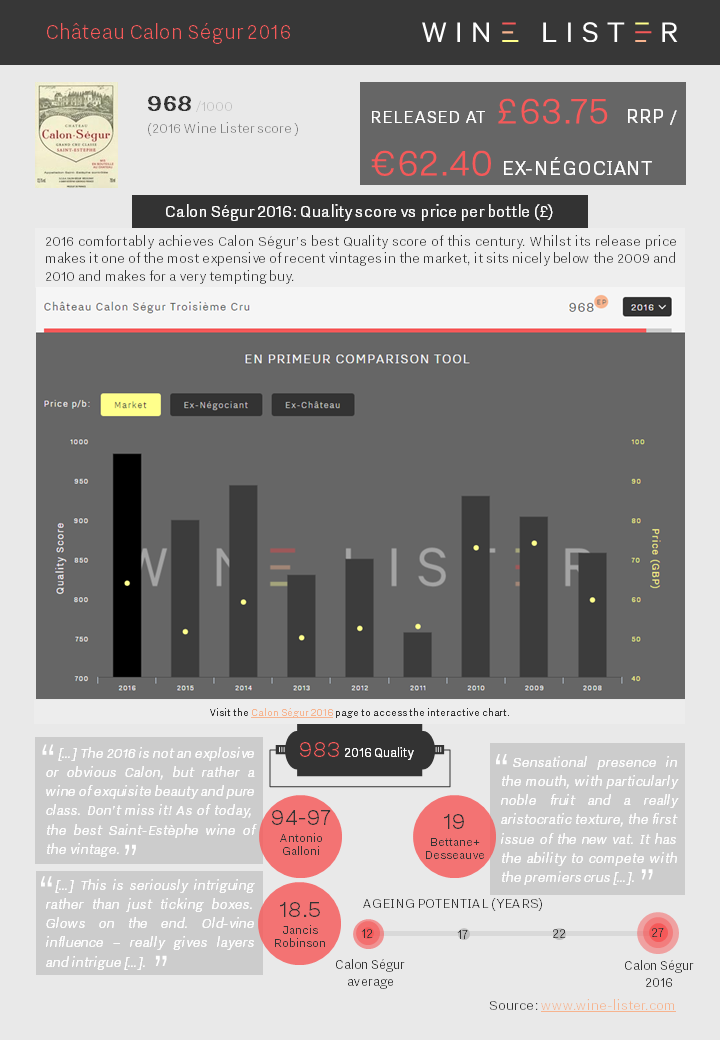 Bordeaux en primeur analysis of Haut-Brion 2016, which has been released this morning at €420 ex-négociant: 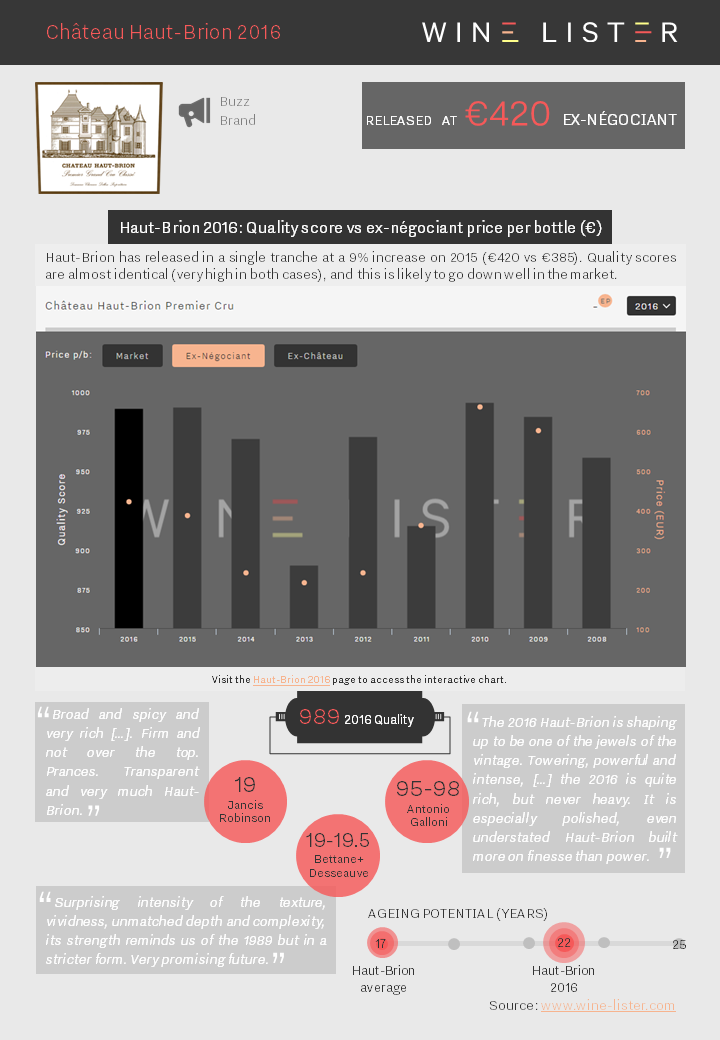 You can download the slide here: Wine Lister Factsheet Haut-Brion 2016

Wine Lister is one year old already (we launched in May 2016). To mark our first birthday, we thought we’d take a quick look back at how we’ve grown and developed in the last year.

First, our website has evolved non-stop! As well as bringing you a full, 360° view of thousands of individual wines, we’ve introduced lots of new features to make it easier for you to analyse and compare them. One of these is our wine comparison tool, enabling you to view wines side-by-side: simply search for the wine you’re interested in, and click the Compare button.

As a birthday treat, we’ve just revamped our home page, and, by popular demand, launched a how it works page, with explanations on the criteria that feed into our three main categories – Quality, Brand and Economics – to arrive at a single wine score using our full 1,000 point scale. 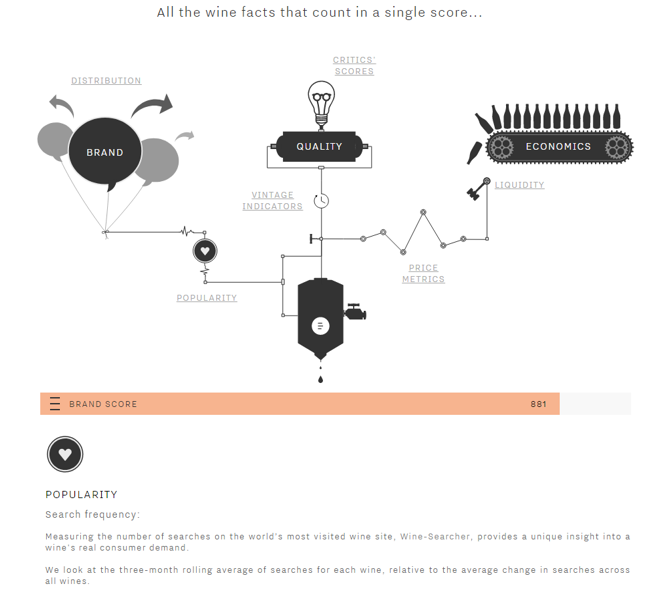 For companies wanting seamlessly to access our proprietary scores and data for publication on their own platforms, we’ve built a dedicated Wine Lister API. To express your interest in accessing our data via this feed, please enroll here.

On the analysis side, we established the Wine Lister blog to bring you proprietary research on fine wine trends, new releases, and exclusive wine trade observations. Plus, you can visit the analysis page of our website to find our popular, highly-visual wine factsheets, alongside in-depth regional reports – the latest of which is Wine Lister’s second annual study on Bordeaux.

Finally, our team has also multiplied, now counting seven members in total, including new colleagues in Bordeaux and Tuscany in addition to our core UK-based team.

Thank you to all of our subscribers and readers for your continued support, and we look forward to updating you with how we evolve in the twelve months to come! If you have any comments or suggestions, please email team@wine-lister.com.

Bordeaux en primeur analysis of Lynch-Bages 2016, which has been released this morning at €96  per bottle ex-négociant: 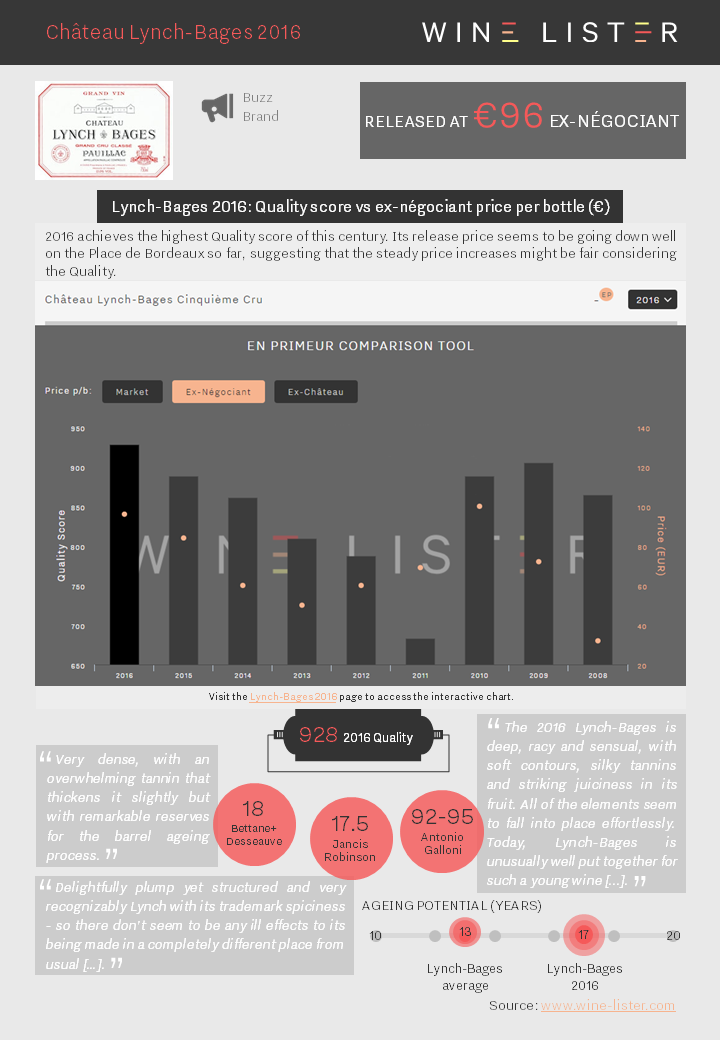 You can download the slide here: Wine Lister Factsheet Lynch-Bages 2016

Bordeaux en primeur analysis of Angélus 2016, which has been released this morning at £298: 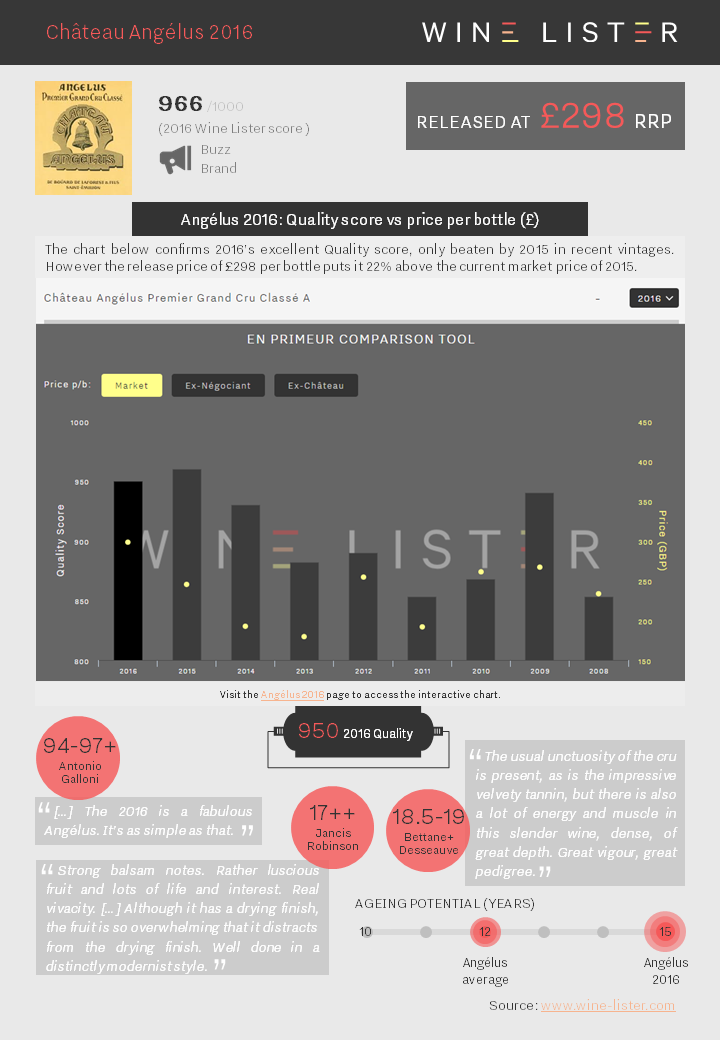 You can download the slide here: Wine Lister Factsheet Angélus 2016

Bordeaux en primeur analysis of Pavie 2016, which has been released this morning at £298: 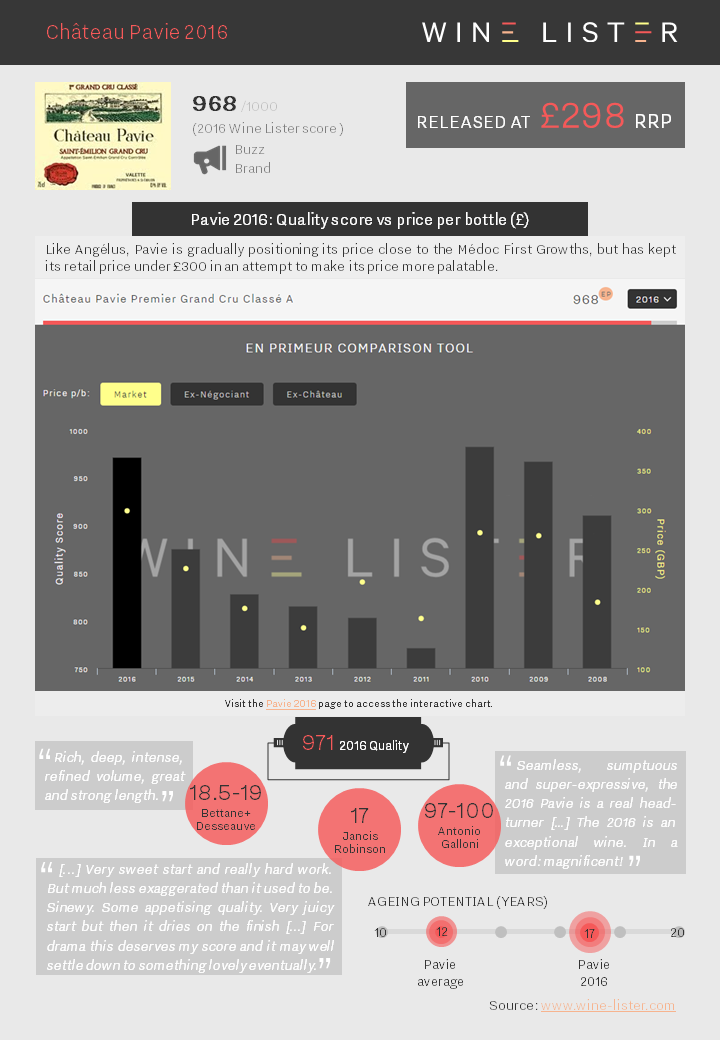 You can download the slide here: Wine Lister Factsheet Pavie 2016

Yesterday saw the release of the first tranche of Château Lafite-Rothschild en primeur. It was a surprising move, hinted at late last week, but early for a first growth to release in what is set to be a long campaign. People were momentarily excited – the campaign seemed to be taking off, with a seemingly reasonable price for a first growth that has historically gained in price after release. However, it very quickly became clear that with just half last year’s volume released, and the promise of a second tranche at a higher price, Bordeaux négociants preferred to hold fire and wait it out.

One courtier said, “to my mind it is not a real release of Château Lafite 2016 because [the price of] a part of the volume en primeur is not known.”

The tranche system for Bordeaux en primeur releases was born of two rationales. First, a way of testing the market with an initial, reasonable price on a portion of the volume produced. Second, tranches are a politically adept method for the five Bordeaux first growths to maintain the appearance of releasing at the same price – as has historically been the form – with the possibility thereafter to diverge significantly in price on subsequent tranches.

There are several négociants whose policy is to adhere to the châteaux’s multi-tranche approach, selling on the first at a corresponding price, and the second at a higher price, and so on. However, those négociants had second thoughts yesterday. If they sell the first tranche at the lower price while other négociants await the second tranche and sell at an average price across the two tranches, they will be stuck with a second batch of wine to sell at a higher price than the rest of the market.

That is why the vast majority of négociants yesterday decided not to sell on their Lafite 2016. One négociant explained that the “volume makes it difficult to offer out,” adding “we’re just waiting for the second tranche to offer in one bunch, at an average price.”

So as the entire Place de Bordeaux waits for the second tranche, after which it will sell on the stock at a pro rata price taking into account the price of both tranches, this begs the question: what was the point of separate tranches at all? Had today’s release been on a larger volume, it could have been the touch paper for a sizzling 2016 en primeur campaign. At 50%, unfortunately, it has proved the opposite.

Reports from the Place are that after the Lafite release early yesterday afternoon, not only were there no further releases, but sales on all other wines slowed right down as the local market let Lafite’s move sink in. Not surprising when you consider the importance for a négociant of a first growth’s release in the scheme of an en primeur campaign: it represents a huge sum compared to selling the lesser crus. If yesterday’s events put other châteaux off releasing today, then with the Thursday bank holiday in France, and many bridging to a long weekend, “a whole week of the campaign could be lost,” lamented another négociant (although this is unlikely with another major wine set to release this morning).

Meanwhile, many importers are frustrated by their inability to actually acquire any of the wine and offer it to their customers. One UK merchant concurred, “it’s not a real release,” clarifying, “until the Bordeaux négociants know what their total volumes are – and what their average cost will be – they can’t really offer the wine to the trade so customers are unable to buy it.”

And so we all await the second tranche. One courtier has been led to believe this will be next week, while Château Lafite itself declines to advise on timing.

Bordeaux en primeur analysis of Lafite Rothschild 2016, which was the first premier cru of this year’s campaign to release: 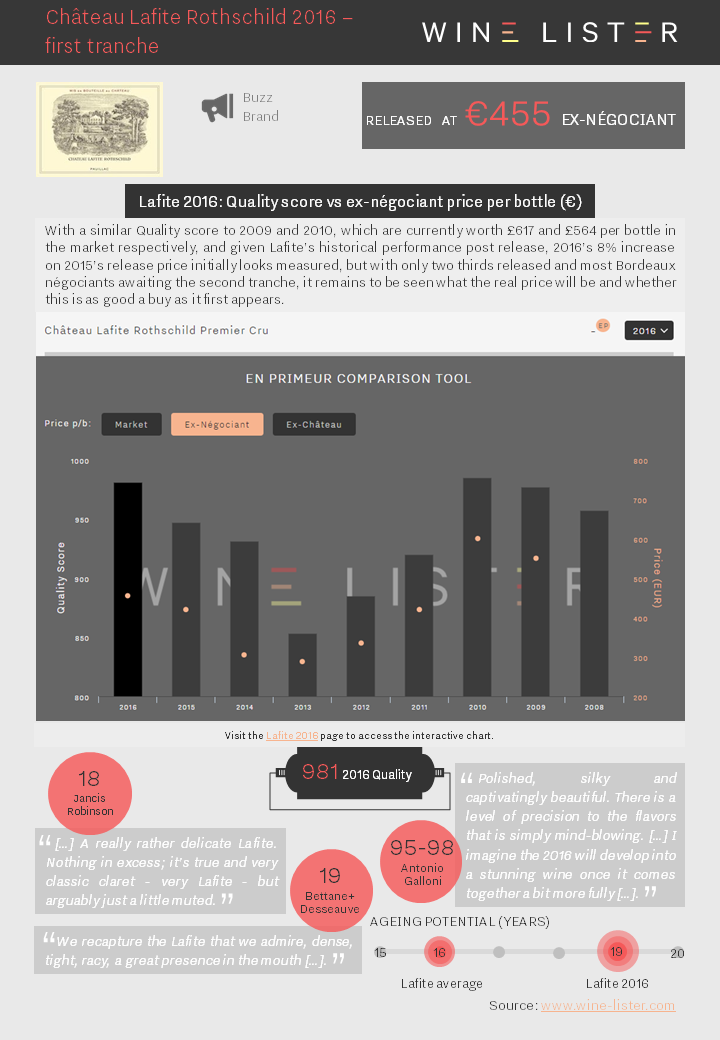 Bordeaux en primeur analysis of Beychevelle 2016, which has been released this morning at £56.50: 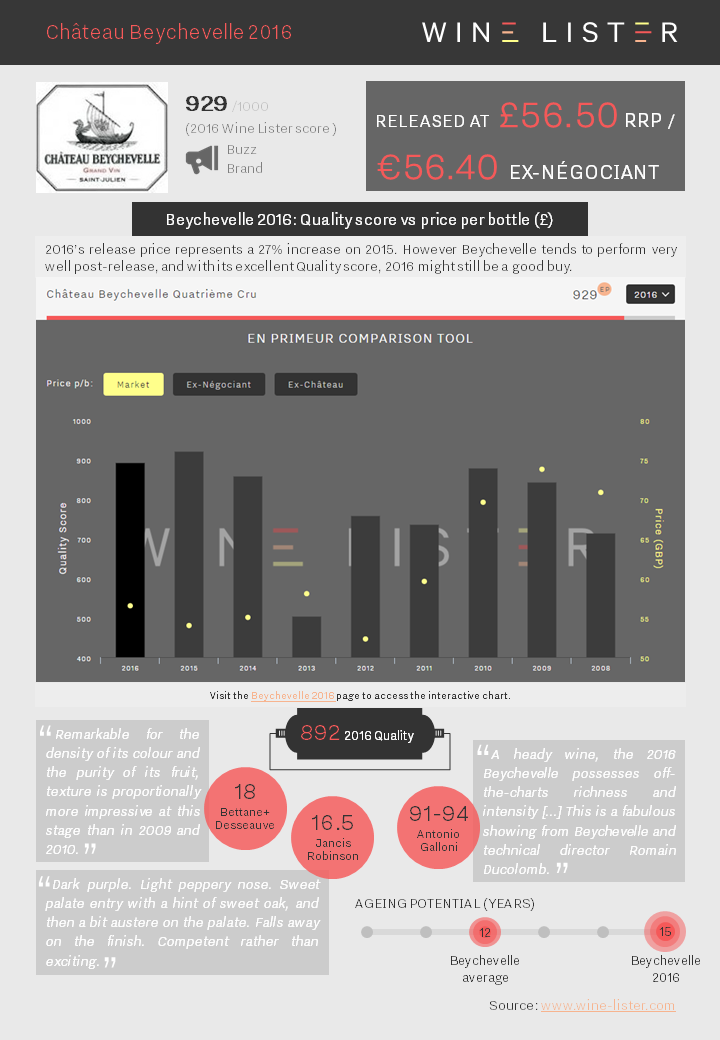 You can download the slide here: Wine Lister Factsheet Beychevelle 2016