In a new climate of Brexit-induced uncertainty, with volatile fund performance and some economists forecasting recession, can fine wine offer some shelter? Research has consistently shown that wine has weak correlation with traditional financial assets, and can therefore be a useful diversification tool. Moreover, returns have been attractive historically, and less risky. 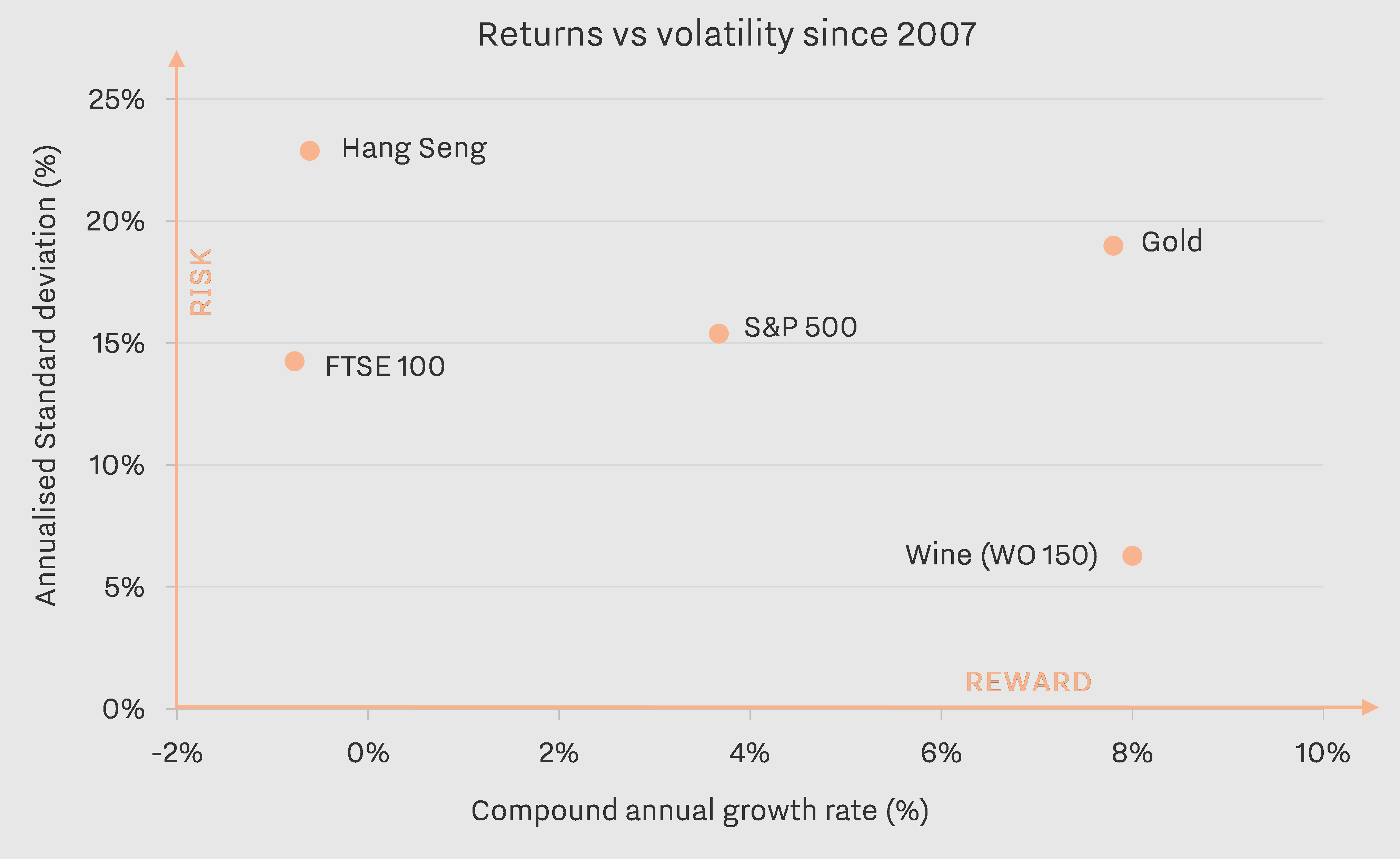 The graph above shows returns since June 2007 for fine wine, gold, and three major stock indices. In spite of the fine wine bubble bursting in the summer of 2011, wine has produced the best annual returns over this period, at 8%.

Note that for this analysis we have used our price data partner’s Wine Owners 150 index, which contains a range of wines from different regions and at different price points. This further underlines the wisdom of diversification at every step – a wine portfolio made up solely of Bordeaux first growths would not yet have regained losses suffered in 2011. It should also be noted that the performance of the WO 150 index does not take into account frictional costs associated with fine wine collecting, namely storage, insurance, transportation, and sales commissions.

What about the risk profile of fine wine? Despite surpassing the S&P 500, the FTSE 100, and the Hang Seng in terms of return, fine wine displays less volatility. It is also less volatile than gold, while providing similar returns over the nine-year period.

Finally, we ran our own analysis to confirm fine wine’s low correlation with stock markets over the same period – in mathematical terms, the index demonstrates correlation of 0.41, 0.03, and 0.15 with the S&P 500, Hang Seng and FTSE 100 respectively (where 1 is complete correlation, and -1 denotes mirror opposites). Fine wine behaves similarly to gold, often viewed as a refuge value in times of financial turmoil – the two show correlation of 0.8.

To take the plunge?

Fine wine seems to possess at least three characteristics making it a viable – and even attractive – alternative asset; a safe haven in tumultuous times. Independently of Brexit-fuelled uncertainty, now might be an opportune time to buy into wine, as it has shown steady – but not bubble-inducing growth since the beginning of 2016.

As a non-mainstream and (ironically) illiquid asset class, fine wine should only ever make up a small proportion of any investment portfolio. And, of course, it is a multi-faceted, non-fungible asset, ultimately made for drinking and enjoying, so we recommend that any notion of investing in wine always be secondary to its primary appeal, and undertaken with expert advice!

For more information on a specific wine – relating to quality, brand, and economics – click on any wine and open out the category bars.

Disclaimer: the opinions expressed in this post or elsewhere on the Wine Lister website do not constitute investment advice.

Which producers will see the largest gain in brand recognition in the next two years? That is one of the many questions we asked in a unique survey of our 42 Founding Members – the majority of the world’s largest merchants, top international wine auctioneers, and several high-end retailers, together representing well over one third of global fine wine revenues. 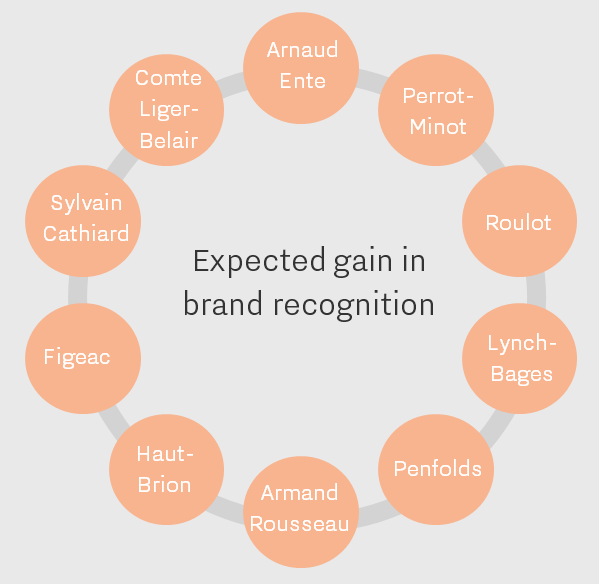 The chart above shows the top 10 brands expected by Founding Members to see their brand recognition increase in the next two years. Unsurprisingly, Burgundy takes the lead, making up six of the ten places. The trade’s picks included rising stars such as Arnaud Ente and Jean-Marc Roulot. Wine Lister’s Founding Members also believe that superstars such as Armand Rousseau will grow even further in brand recognition.

Penfolds also already possesses a brand so strong it is hard to comprehend how it will grow much further, as the trade predict it will. The appearance of three Bordeaux wines also comes as a surpise, given the preeminent position already occupied by brand Bordeaux in the fine wine market. Our Founding Members see room for burgeoning brand power for Châteaux Figeac, Haut-Brion, and Lynch-Bages. Why?

Figeac is causing a stir and is widely held to be on the path to regaining greatness. Haut-Brion is perhaps viewed as having less renown relative to its fellow first growths in the Médoc, in spite of Samuel Pepys fame (“a good and most particular taste”). However, Lynch-Bages is already so many leagues ahead of its peers in terms of brand recognition (check out its impressive distribution in top restaurants and online search frequency on the site), that it’s hard to see where it can go next. Have our Founding Members got it right?

To access more findings from our Founding Member survey, read the complete study, “Bordeaux – Reasons to Hope“. If you are not a subscriber yet, why not try a 14-day free trial!